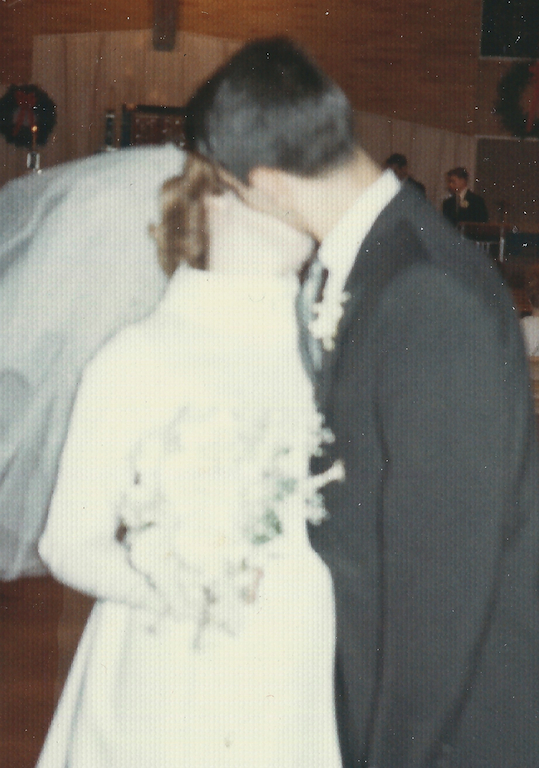 You may kiss the bride. Vows exchanged, the happy couple makes the moment official in this photo taken on December 28, 1968.
THE WHOLE STORY — To see a complete list of the 978 items currently posted to Reeling Back, visit the FULL SITE INDEX. To locate specific names or subjects, type your key word(s) into the Search box (located in the right-hand corner of the nameplate above), and click on the magnifying glass (search) symbol. The archive grows almost daily, so feel free to explore.


Baby, it was cold outside! On this day (December 28) in 1968, 9.7 centimetres (3.8 inches) of snow fell on the Chicago area. The highest daily dump of the white stuff of the entire year, it might have been nature’s warning to a young couple getting married on that day that the road ahead was less than clear.

Fifty years ago today (December 28), Fred Jaycox of Highland Park, Illinois, walked his youngest daughter Susan down the aisle of the Holy Cross Roman Catholic Church. Waiting for her at the altar was Michael Walsh, a Canadian that she had met four years earlier at the University of Toronto, where they both were freshman classmates.

People who were there remember it as a comedy of errors. Start with the date. Who gets married midway between Christmas and New Years? As our daughter would say, That’s just nuts!

Or, perhaps, the setup for a romantic comedy.

(Though no one mentioned it at the time, December 28 also counts as the anniversary of the world’s first commercial movie screening, an event that happened in Paris in 1895. The program consisted of 10 short films . . . but I digress . . . )

Then there was that record-setting snowfall. We’ll never forget such rom-com moments as Susan shovelling out the driveway of her parent’s home (so she could make it to an early-morning hairdressing appointment); or of Michael, the groomsmen’s car having run off the road into a snowdrift, hitchhiking to that suburban A-frame church in his formalwear.

It was the late 1960s, turbulent times to be setting out on a life together. I later learned that some members of the wedding party thought our time together came with a best-before date. They joked about setting up a pool that would pay out to the one who came closest to predicting when we’d divorce. To date, no one has collected on that bet.

From the beginning, movies have been a shared passion. Was our future there to be seen in 1968’s cinematic tea leaves? Yes, we had caught The Love Bug, but were we The Odd Couple or Romeo and Juliet? Optimism was hardly the mood looking forward to 2001: A Space Odyssey, and married life on this Planet of the Apes. And then there was the year’s horrific take on the possible problems of parenting, Rosemary’s Baby.

Movies. Susan and I have shared a lot of them. Obscure bits of film dialogue have been part of our conversational shorthand — well, forever. During my years as film critic, many of my best ideas were the result of our discussions in the hours after a screening. As must by now be obvious, Reeling Back is a record of one aspect of our fifty-years-plus creative partnership.

Perhaps less obvious to its readers is the essential role Susan plays in the life of this website. She is its executive editor and final proofreader. Nothing is posted here until it has met her approval.

It’s now the late 2010s, turbulent times to be celebrating a life together. Among the many things that I’ve learned in our first 50 years is that every new day is a gift. That, and the fact that I really must tell her “I love you” more often.

We’ll continue our Reeling Back collaboration in the new year. Included among our December postings were:

THE CHANGELING — A drama of dark emotions, this 1980 haunted house tale was directed by Peter Medak on Vancouver locations. A Genie Award winner, it has has become a classic of its genre.(December 23)

PETER MEDAK — In a 1980 interview, the Hungarian-born filmmaker chatted with me about making The Changeling, his memories of Budapest and his plans for the future. (December 23)

GEORGE STEVENS: A FILMMAKER’S JOURNEY — Directed by his son, George Stevens Jr, this 1984 documentary chronicles the career of the man who made such movie classics as Shane, Giant and The Diary of Anne Frank. (December 18)

WHERE THE HEART IS — Hired by Disney Productions to direct its 1990 summertime family feature, John Boorman went his own way. The result was a quirky comedy, a reverse King Lear set in modern New York. (December 13)

CHINA MISSION — Recalled in the 2018 moment when Canada is caught in the middle of a Sino-American trade war, director Tom Radford’s 1980 documentary tells the story of Chester Ronning, the Canadian diplomat who was our first ambassador to the Peoples Republic. (December 13)

LADY JANE — Best known for his work with England’s Royal Shakespeare Company, director Trevor Nunn offered his film version of the teen queen’s tale. Helena Bonham Carter has the title role in the 1986 costume drama that combines A Man for All Seasons with Romeo and Juliet. (December 8)

THE ABDICATION — Adapted from Ruth Wolff’s stage play, director Anthony Harvey’s 1974 feature tells the story of Christina, the 17th-century Swedish queen who decided to quit while she still had a head. Liv Ullmann had the titled role. (December 8)