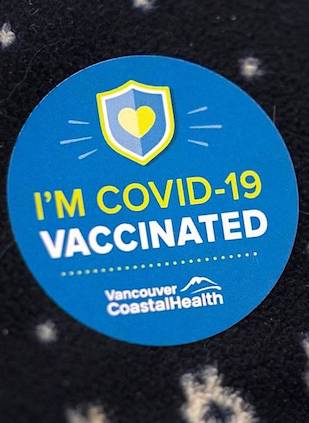 Declaring to the world that this Vancouverite has taken his jabs.
THE WHOLE STORY — To see a complete list of the 1,190 items currently posted to Reeling Back, visit the FULL SITE INDEX. To locate specific names or subjects, type your key word(s) into the Search box (located in the right-hand corner of the nameplate above), and click on the magnifying glass (search) symbol. The archive grows with some regularity, so feel free to explore

Searching for the words


Another New Year’s Eve (December 31) is upon us, and with it the inclination to look back upon the the past 12 months in the hope that they contain some positive memories. Unexpectedly, the word that best sums up my experience of 2121 is “left.”

Looking back on it, this last year was not without its accomplishments. Today, I find myself recalling a 1989 biographical feature called My Left Foot, and thinking that 2021 was the year of my left arm. That poor limb was on the receiving end of more than a few hypodermic injections — what the Brits insist on calling “jabs” — as the months passed.

First, there were two shots of something called Shingrix, a vaccine recommended for those of us of a certain age who are at risk of shingles. Then, there were the socially-responsible COVID-19 vaccinations, three pokes in all. The routine annual flu shot followed and, because I don’t want to add “osteoporosis” to my medical vocabulary, a dose of Prolia to boost my bone density. And, thanks to the care and skill of all the health care professionals involved, I managed all that gain with no pain.

Less satisfying was my dedication to this website. In early May, I felt at a loss for words. The fatigue that older folk often feel (and that seems to have been exacerbated by the unrelenting pandemic) was just enough to keep me from posting new material to Reeling Back. In October, I failed to mark the archive's eighth year in cyberspace with the usual online self-congratulation. By November, though, I was really tired of being tired, and the result was three new items.

December has been a touch better, with four postings recorded. In the best of New Year’s Eve traditions, I am resolved to do better in January. We all know that 2022 will be full of challenges but, after surviving 2021, we’re much better at making the necessary adjustments to such interesting times. The seven most recent additions to my archive include:

SHADOW OF CHINA —  Past and future converge in director Mitsuo Yanagimachi’s 1989 examination of Hong Kong on the eve of great change. John Lone stars as a former revolutionary and would-be “voice” of the city. (December 31)

COUSINS — Filmed in and around Vancouver, director Joel Schumacher’s 1989 adaptation of the French marital-relations farce Cousin, cousine is a lot fun. Ted Danson and Isabella Rossellini co-star as the in-love in-laws. (December 29)

CRAZY PEOPLE — A film brimming over with product placements, director Tony Bill’s 1990 feature was sold as satire, but played like an unending series of TV ads. (December 26)

MANDINGO — Based on racist author Kyle Onstott’s 1957 novel of life on Falconhurst, a “human breeding farm” in the ante-bellum South, director Richard Fleischer’s 1975 feature was probably the most successful of what’s now known as “slavesploitation” cinema . (November 20)

DRUM — A year after Mandingo, director Steve Carver picked up the story with this sequel in which a system built on sexual perversion, miscegenation, social injustice, cruelty and sadism erupts in a slave rebellion. Boxer Ken Norton starred in both pictures. (November 20)

MOVIES: MYTHS & MEDIA — Not so much a review as a remembrance, this is the text of a talk I gave at a 2002 Mensa gathering in Vancouver. It looked at the role of the artist in maintaining social function in a mad, mad, mad, mad world, how corporate concentration cheats us out of any real understanding of our media, and what really happened on September 11, 2001. (November 10)