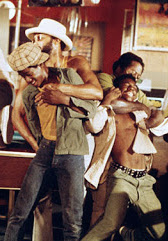 A Dead End in Texas


Family matters when it comes to maintaining interest in a movie franchise. Shaft, opening today (June 14) in the U.S. and Canada, offers three generations of the African-American crime-fighting clan. In the new picture, retired private detective John Shaft (Richard Roundtree) is revealed to be father (not the uncle) of practicing P.I. John Shaft II (Samuel L. Jackson), who is the father of John “J.J.” Shaft (Jessie Usher), an F.B.I. special agent. Lest we forget, John Senior was the title character in director Gordon Parks’s incendiary 1971 feature Shaft, one of the two urban action films that begat the “blaxploitation” movie genre. (The other was Melvin Van Peebles's independently-made Sweet Sweetback's Baadasssss Song.) Said to have saved the struggling MGM Studios from bankruptcy, Shaft was followed by Shaft’s Big Score (1972) and Shaft in Africa (1973). There was even a short-lived Shaft TV series. All if them starred Roundtree. John Senior’s nephew and namesake was the title character played by Jackson in Shaft, director John Singleton’s 2000 franchise reboot. Today’s reunion, directed by Tim Story, offers Reeling Back an opportunity to look back at some early blaxploitation pictures. The four films being added today (with links to each following the Afterword to this posting) include director William A. Graham’s 1974 street-gang drama Together Brothers.

TOGETHER BROTHERS. Written by Jack Dewitt and Joe Greene. Music by Barry White. Directed by William A. Graham. Running time: 94 minutes. Mature entertainment with the B.C. Classifier’s warning: violence and coarse language. TOGETHER BROTHERS MADE A BIG impression on Galveston, Texas. For one thing, it was the first — and only — feature film ever made there. For another, its Gulf port location is one of the few interesting things in it.
A bland, black action film, it is the story of a teenaged street gang that attempts to track down a cop killer. The basic idea has a lot of appeal, and the producers may have discussed the genre's prototype, 1937’s Dead End, the film that launched the Dead End Kids.
In one form or another, that gang was together for the next 20 years, variously known as the East Side Kids and, finally, The Bowery Boys. They made a firm impression. Television's Archie Bunker, as Toronto publisher George Henderson points out, is a carbon copy of Leo Gorcey in his Dead End persona.
What made the old films so memorable was the fact that both the Kids and their backlot slum seemed to be part of a real world. Together Brothers, despite authentic locations, lots of gritty low-life touches and the sort of language that would have stopped Dead End villain Humphrey Bogart dead in his tracks, is considerably less real.
At fault is the Jack De Witt/Joe Greene script, a screenplay that develops situations rather than characters. The audience is supposed to be carried along through a series of tense confrontations into a final race against time and a psychotic killer.
The problem is that director William A. Graham is not an action director. His last picture was a cornpone backwoods drama called Where the Lilies Bloom [1974]. Here, faced with a storyline that demands realism, Graham still seems inclined to emphasize goodness and child-like innocence.
The gang, led by a confused-looking 15-year-old called H.J. (Ahmad Narradin), is supposed to be a collection of poverty-hardened street fighters in the process of developing codes of honour and survival. What Graham gives us, though, is the Galveston chapter of the Mickey Mouse Club.

Afterword: Not my idea of a dream vacation destination, Galveston is a port city located on an island in the Gulf of Mexico southeast of Houston, Texas. Before 1969, it was best known for having been devastated by a hurricane in 1900, still considered the deadliest natural disaster in U.S. history. Then, in 1969, country singer Glen Campbell released a pop tune called Galveston. It was the No. 1 song in the U.S. for six weeks, and became the city’s unofficial anthem. Four years later, Hollywood director William A. Graham arrived with a movie crew to make the city's first ever feature film, Together Brothers.
Before 1993, another three directors dropped by to shoot location footage: Mexican director René Cardona Junior for his 1978 mystery-thriller The Bermuda Triangle; Wim Wenders for his rural drama Paris, Texas (1984); and George Litto for his crime drama Night Game (1989). The pace picked up after 1993, the year that Texas joined the growing number of U.S. states to enact so-called “right-to-work" legislation. Because words are important, let’s pause for a moment to unpack that particularly duplicitous phrase.
Since the mid-1960s, the political far right in the United States has regarded George Orwell’s Nineteen Eighty-Four not as a cautionary tale, but as a how-to manual. Following the resounding defeat of Senator Barry Goldwater, the corporate-friendly candidate for president in 1964, a number of so-called “think tanks” were founded to change the political discourse. Funded by self-described “conservative” billionaires, their work seems based on what Orwell called “The Principles of Newspeak,” the purpose of which “was not only to provide a medium of expression for the world-view and mental habits proper to (its) devotees . . . but to make all other modes of thought impossible.”
One example is “right to life,” the words used by anti-abortionists to characterize their opposition to individual female rights as a moral cause. Changing the words serves to disguise their true purpose, which is to outlaw choice in the matter of a woman’s right to control her own body. The recent passage of an extreme anti-aboriton bill in the state of Georgia suggests that such big lies have devastating social and political consequences.
Now, about that phrase “right to work.” Like “right to life,” it is a lie concocted by self-serving “conservatives” to hide an anti-worker, union-busting agenda. Corporations hate unions because they advocate for fair wages, an expense that slows the flow of wealth into the hands of the already egregiously rich. As might be expected, the “right to work” idea oozed up from the heart of the Old Confederacy, yet one more way to keep those free blacks in their place. Along with a deepening wealth gap, this pro-billionaire movement really took off in the 1970s until, today, 27 states have laws on the books that restrict workers' rights to organize and participate in collective bargaining. Which brings us back to Galveston.
In 1993, perhaps noting the business being lost to Louisiana (a “right-to-work" haven since 1976), Texas joined the club. The film biz, always on the lookout for a bargain, started outsourcing work:  director Adam Rifkin’s car comedy The Chase (1994); the TV mini-series A Woman of Independent Means (1995); Robert Harling’s Terms of Endearment sequel The Evening Star (1996). Because of its proximity to Houston, the cameras have continued to roll with regularity, producing largely unmemorable big- and small-screen products. In 2017, Paris-born director Mélanie Laurent rolled into Savannah, Georgia to make her first English-language feature. Though her crime drama was called Galveston, no scenes were shot in the Texas city.
For the record, California (America’s single largest film and television production centre) remains labour-friendly and unionized. British Columbia (the No. 2 choice for filmmakers) is, as well. Cheap labour is not among Vancouver’s advantages over Galveston. Its abundance of locations and an unbeatable exchange rate on the dollar just could be, though.