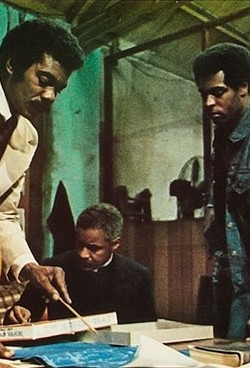 Adding colour to a caper


As ever, diamonds are for stealing


Family matters when it comes to maintaining interest in a movie franchise. Shaft, opening today (June 14) in the U.S. and Canada, offers three generations of the African-American crime-fighting clan. In the new picture, retired private detective John Shaft (Richard Roundtree) is revealed to be father (not the uncle) of practicing P.I. John Shaft II (Samuel L. Jackson), who is the father of John “J.J.” Shaft (Jessie Usher), an F.B.I. special agent. Lest we forget, John Senior was the title character in director Gordon Parks’s incendiary 1971 feature Shaft, one of the two urban action films that begat the “blaxploitation” movie genre. (The other was Melvin Van Peebles's independently-made Sweet Sweetback's Baadasssss Song.) Said to have saved the struggling MGM Studios from bankruptcy, Shaft was followed by Shaft’s Big Score (1972) and Shaft in Africa (1973). There was even a short-lived Shaft TV series. All if them starred Roundtree. John Senior’s nephew and namesake was the title character played by Jackson in Shaft, director John Singleton’s 2000 franchise reboot. Today’s reunion, directed by Tim Story, offers Reeling Back an opportunity to look back at some early blaxploitation pictures. The four films being added today (with links to each following the Afterword to this posting) include director Barry Pollack’s 1972 attempt to add noir to the mix, Cool Breeze

COOL BREEZE. Based on W.R. Burnett's 1949 novel The Asphalt Jungle. Written and directed by Barry Pollack. Running time: 104 minutes. Restricted entertainment with the B.C. Classifier's warning: Frequent swearing and coarse language.
IN THE LATE 1930s, back in the days when the U.S. armed forces were segregated and there was no such thing as the Congress of Racial Equality, Hollywood had a formula for entertaining both the Southern farm Negro and the urban black ghetto dweller. It was the all-black film.
Cheaply made and quietly distributed, the all-blacks exploited a market that otherwise might have gone untapped by the movie moguls. Unfortunately, exploitation was their only purpose, and the films themselves were filled with the same Negro stereotypes as predominantly white films.
The same sort of problem afflicts Cool Breeze, a predominantly black movie currently jiving along at the Strand Theatre. Hastily made to capitalize on the success of the slickly-mounted Shaft [1971], the movie is best described as a Hot Rock with resentment.
Set in California (rather than The Hot Rock's New York), the film opens with caper-master Sydney Lord Jones (Thalmus Rasulala) being processed out of San Quentin. When we first see him, he is reading a book on diamonds. On leaving the prison, he immediately sets off for Los Angeles with a plan.
To effect his scheme, he needs $50,000 "for personnel and equipment," so he pays a visit to ghetto bookmaker "Stretch" Finian (Sam Laws) looking for his capital. Finian brings in a high-living slum landlord named Mercer (Raymond St. Jacques) to finance the caper, and Jones rounds up his team.
It consists of the Battle brothers, John (Wally Taylor) and Travis (Jim Watkins), the wheel and muscle men, and Roy Harris (Rudy Challenger), an Oral Roberts-style preacher who cracks safes on the side. Proceeds from the robbery will go toward the establishment of a black-owned bank.
The team functions well, pulling off the job with style and reasonable precision, but something goes wrong, and the tone changes from The Hot Rock [1972] to The Lost Man (a 1969 vehicle for Sidney Poitier). There has been a double-cross, and the robbers are on the run.
Despite the lightness of the banter, Barry Pollack's heavy-handed direction underscores some pretty cliché themes. Among them:
* Black is beautiful. All right, but movies, regardless of colour, are usually more believable when the female leads are actresses rather than models.
* Black sex is hotter. As a corollary to the above, the theory may be worth looking into. Unfortunately, in an action film, repeated pauses to show the various characters flexing their sexual muscles cannot help but break the mood. Virtually none of the couplings are essential to either the plot or character development.
* Whitey is a moron. He certainly is in this film. Reverse stereotyping doesn't make the black characters any more real, though.
Retrospectively, one of the film's best scenes has an unintentional impact. The robbers, on their way to the jewelry store, have stolen a municipal bus to use for their getaway.
Knowing the store to be camera protected, Jones issues his team-mates white rubber personality masks. His face becomes that of Richard Nixon, the preacher becomes Spiro Agnew, and muscleman Travis is George Wallace.
Says Travis, donning his mask: “I could get shot looking like that."
Like much of Cool Breeze, the impact is borrowed. In it MGM tacitly suggests that the B in B-budget pictures may now stand for "Black." And no matter how they sell it, it still means second-class.
*    *    *
FAIR PLAY: Last week [June, 1972] the Strand Theatre took a blasting in this space for programming as its short subject a dated bit of American propaganda on the island of Taiwan, the so-called "free China."
This week, in a 180-degree turnabout, the time-filling short is En Garde/On Guard, a National Film Board mood piece made with the co-operation of the Canadian Armed Forces. Without narration or martial sound effects, the film offers a lightly structured look at our military at home and around the world. The musical score is middle-of-the road modern, and the message seems to be "peacekeeping can be fun."

Afterword: Film historians are generally agreed that a black exploitation (or, in Variety-speak, blaxploitation) film genre began with two features released in 1971: the independently-made Sweet Sweetback's Baadasssss Song and the M-G-M studio production Shaft. Both films were directed by accomplished black directors, the first by Melvin Van Peebles and the second by Gordon Parks. Because their success went beyond the market for the traditional all-black film, there was a sudden need in the studio front offices for more such product.
Because accomplished black directors were in short supply — Spike Lee did not make his feature debut until 1983 — a lot of the early blaxploitation movies were the work of white guys. Some were journeymen directors, like motorcycle movie specialist Jack Starret, who put Jim Brown throughout his paces as Slaughter in 1972. Others were Hollywood newbies, like TV adman Martin Goldman, who gave us one of the first blaxploitation westerns, 1972’s The Legend of Nigger Charley.