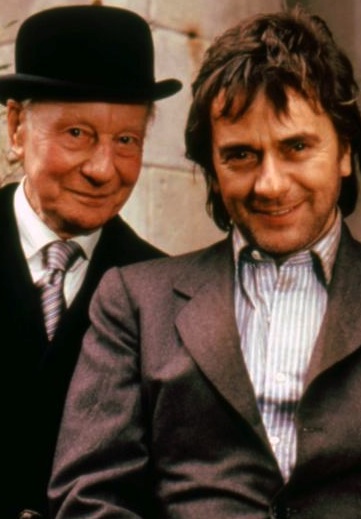 Back from the dead, Hobson (John Gielgud) remains loyal to his drunken employer Arthur Bach (Dudley Moore) in director Bud Yorkin's 1988 Arthur 2: On the Rocks.

A moment of dignity


Second round is worse than the first


Despite a distinguished career portraying kings, princes, patricians and popes, John Gielgud won his Oscar for playing a drunken lout's manservant in the 1981 comedy Arthur. Born on this day (April 14) in 1904, Gielgud reprised the role in director Bud Yorkin's 1988 sequel, Arthur 2: On the Rocks.

Friday, July 8, 1988.
ARTHUR 2: ON THE ROCKS. Written by Andy Breckman. Music by Burt Bacharach. Directed by Bud Yorkin. Running time; 111 minutes. Mature entertainment with the B.C. Classifier's warning: occasional coarse language. SUSAN JOHNSON NEEDS HELP. Goodness knows, her last encounter with Arthur Bach (Dudley Moore) was a disaster.
Despite her obvious breeding, undeniable beauty and inexplicable affection for him, the permanently pickled pygmy left her standing at the altar. Director Steve Gordon's Arthur (1981) ended with the mizzled millionaire declaring his love for the plainspoken waitress and sometimes-shoplifter Linda Marolla (Liza Minnelli).
Under the circumstances, a reasonable woman would have considered her position, recognized that her diminutive intended had sour mash for brains and thanked God for her last-minute salvation. If Susie J. was even marginally rational, though, there'd be no reason for the excruciatingly awful Arthur 2: On the Rocks.
Alas, the jilted Johnson heiress (Cynthia Sikes, replacing Jill Eikenberry in the role) has taken leave of her patrician senses. "I'm a woman who knows what I want," she tells the drunken dullard in their new movie.
"And what I want is you!"
Pray why? As played by the self-satisfied Moore, Arthur Bach really is the most obnoxious dipsomaniac in Manhattan. His late manservant Hobson (John Gielgud) hit the nail squarely on the head in the first picture, when he called the hedonistic inebriate "a little shit."
In a misguided attempt to resurrect the white-telephone comedy style of the 1930s, director Gordon created the "loveable" alcoholic Arthur. Despite its casually poisonous drinking-is-fun-and-drunks-are-funny premise, the original film vomited up domestic rentals of $42 million, enough to tempt the moviemakers back to the bar for another round.
There's no help for Ms Johnson, of course. Less a character than an excuse, she is delighted that her father, Burt (Stephen Elliott, reprising the role), has come up with a plan to part her fried fool from both his money and his chosen mate (Minnelli, also back).
The calculating Johnsons reason that penury will convince Arthur that marriage to Linda is a mistake. Indeed, the unappealing sot is about to come around when who should turn up but the redoubtable Hobson (Gielgud), the picture's guest ghost.
Credit Gielgud with bringing a moment of dignity to an otherwise wasted 111 minutes of celluloid. "Did I embarrass you?" the hapless Arthur asks solicitously.
"Only every waking moment," says Hobson, summing up in a phrase the only proper reaction to this forced enterprise. Under the direction of Bud (Twice in a Lifetime) Yorkin, the project's bad taste is redeemed neither by wit, intelligence, sophistication nor satiric intent.
In common with the first feature, Arthur 2: On the Rocks is as unfunny as a boozer's belch.

Afterword: In 2016, with so many American movies fixated on the zombie apocalypse, the phrase "white-telephone comedy style" seems particularly obscure. It once was used to describe movies that offered Depression-era audiences an opportunity to laugh at the urban wealthy, the one-percenters of the 1930s whose affectations included such luxuries as white telephones. As fans of the Thin Man series know, the well-to-do were also prodigious drinkers, with the result that they were toujours gai (another phrase that's passed from common use).
A renowned English stage actor, John Gielgud showed little interest in making movies for the first 30 years of his performing career. Though playwright Alan Bennett once wrote that there was "an iron streak of tinsel that runs through Gielgud's character," he seemed immune to the magnetism that attracted his British colleagues Laurence Olivier and Richard Burton to Hollywood. He was nearly 50 when he finally gave in, travelling to Los Angeles to play "lean and hungry" Cassius opposite the likes of Marlon Brando and James Mason in 1953's Julius Caesar. His screen appearances increased as he got older, and he played roles that were nothing if not eclectic. He earned a supporting Oscar nomination as France's Louis VII opposite Richard Burton in 1964's Becket, and generated laughs as a patrician corpse in 1965's The Loved One.
Gielgud won the 1982 supporting actor Oscar for his performance in the first Arthur feature. ("It was strange," his May 2000 London Telegraph obituary tells us, "that this slight film made him universally known after six decades as a leading stage actor.) During his half-century second career in the movies, he appeared in such features as director Bob Clark's Murder By Decree (1979); Tinto Brass's Caligula (1979); Moustapha Akkad's Lion of the Desert (1980); Hugh Hudson's Chariots of Fire (1981);  Richard Attenborough's Gandhi (1982); and Peter Greenaway's Prospero's Books (1992). He made his last big screen appearance at the age of 94, playing Pope Pius V in 1998's Elizabeth. Today (April 14), is the 112th anniversary of John Gielgud's birth.