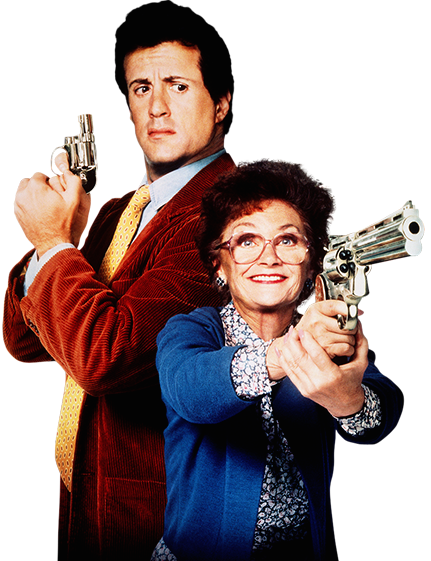 In character as L.A. Police Sgt. Joe Bomowski and his mother Tutti, Sylvester Stallone and Estelle Getty strike a poster pose for director Roger Spottiswoode’s comedy Stop! Or My Mom Will Shoot.

Son with a gun


It can be argued that moviemaking was in his blood. Roger Spottiswoode, born in Ottawa on this day (January 5) in 1945, is the son of cinema theorist Raymond Spottiswoode. Dad was one of the founding fathers of the National Film Board of Canada, and author of the pioneering 1935 book A Grammar of the Film: An Analysis of Film Technique. Raised in the U.K., Roger learned his craft in television, working as a documentary editor. In 1971, he was part of the team that cut Sam Peckinpah’s British-made feature Straw Dogs, and he relocated to Hollywood to work on the director’s Pat Garrett and Billy the Kid (1973). He returned to Canada during its era of tax-shelter pictures to make his own directorial debut with the 1980 slasher flick Terror Train. (And he keeps coming back, with six of his 19 theatrical features to date shot here.) He was soon recognized as a craftsman with a knack for choosing challenging projects and, in 1997, he was put in charge of Tomorrow Never Dies, the 18th “official” James Bond adventure. Roger Spottiswoode’s diverse interests show through in the four films being added to the Reeling Back archive today (with links to each following the Afterword to this posting). Showing off his flair for comedy, he got a funny, good-hearted performance out of action star Sylvester Stallone, playing an L.A. cop in the 1992 feature Stop! Or My Mom Will Shoot.

Friday, February 21, 1992
STOP! OR MY MOM WILL SHOOT. Written by Blake Snyder, William Osborne and William Davies. Music by Alan Silvestri. Directed by Roger Spottiswoode. Running time: 87 minutes. Rated Mature with the B.C. Classifier’s warning:  occasional violence, coarse language and nudity. AWWW, MOM!
I've had enough to eat, thanks . . . Do you have to tell everybody those stories? . . . Please, Mom, not the baby pictures!
Joseph Andrew Bomowski (Sylvester Stallone) loves his mom and, yes, he knows he should call her more often. But she lives in Newark, and he lives in Los Angeles and, what with the time difference and his job, well, you know how it is.
Tutti Bomowski (Estelle Getty) loves her son, the police sergeant. He could be neater, of course, and he deserves a promotion if only so that he could propose to his girlfriend, that nice police lieutenant Gwen Harper (JoBeth Williams).
Producer Ivan Reitman loves to heckle the big guys. His last two outings as a director have given us Arnold Schwarzenegger as Danny DeVito's twin and as a kindergarten cop.
Here, in the producer’s chair for director Roger (Air America) LINK <> Spottiswoode, Reitman offers us action icon Sly Stallone and poses the comic question, "How's your Mom, Rambo?"
Inspired by two simple folk truths — first, a cop's basic loyalty is to his partner; and second, a boy's best friend is his mother — Stop! Or My Mom Will Shoot is a modest, always cheerful shot at all those baaadass buddy movies.
Effective if unambitious, Bomowski is the sort of guy who enjoys his Miller time and avoids serious emotional involvements.
Mom's arrival for a visit stirs up his subconscious. He has a nightmare in which he wins a shoot-out with a heavily armed terrorist only to be confronted by his mother, who is carrying outsized packages of baby powder and disposable diapers.
We see that Sgt. Bomowski is standing in the street wearing a large diaper. "I don't want to be changed!" he wails.
Suddenly, Gwen steps forward, dressed in a patrolwoman’s uniform, a gun in her hand. “I’ll change him."
In this lightweight, good-hearted picture, Spottiswoode deploys the taste and comic skills he first displayed in 1989’s Turner & Hooch. Stallone plays the decent, put-upon hero without either the violence-driven pretensions of his Rambo character or the formulaic bathos of Rocky.
As his Mom, Getty gets maximum mileage out of her diminutive size and maternal experience as a Golden Girl. The result is another cute, competent comedy in the Reitman style.

Afterword: During his nearly 40 years as a director, Roger Spottiswoode has made some fascinating career choices. Never having met the man, I know that I am venturing on to the thin ice of speculation in attempting to explain them. Even so, I do recall a 1970 essay by film historian Jack Ellis — Grierson’s First Years at the NFB — in which Roger’s father Raymond is described as “prickly,” a word used to describe a person not used to suffering fools gladly.
I’m guessing that after having made three Hollywood comedies — Turner & Hooch, Air America LINK <> and Stop! Or My Mom Will Shoot — in a row, the socially aware director of Under Fire LINK <> wanted to sink his teeth into something of substance. His next three films were the 1993 TV movie And the Band Played On, focused on the politics of the AIDS epidemic in the U.S., Mesmer (1994), a biographical drama on the life of the 18th century Viennese doctor, and Hiroshima (1995), a Canadian-Japanese mini-series examining the decision to drop the first atomic bomb.
It’s hard to know what he brought to Tomorrow Never Dies, Spottiswoode’s 10th theatrical feature and the 18th in the “official” series of James Bond adventures. Critics did note that its storyline — the villain is a Rupert Murdoch-like media mogul who sees market potential in starting a Third World War with China — had more social content than is usual for a 007 romp, but franchise filmmaking is a kitchen teeming with cooks. With a single exception (2000’s The 6th Day, an Arnold Schwarzenegger vehicle shot in Vancouver), all of Spottiswoode’s subsequent films have been modestly budgeted features more interested in character and content than special effects. Roger Spottiswoode turns 74 today (January 5).