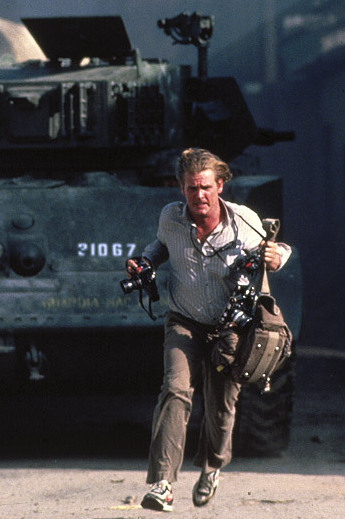 
It can be argued that moviemaking was in his blood. Roger Spottiswoode, born in Ottawa on this day (January 5) in 1945, is the son of cinema theorist Raymond Spottiswoode. Dad was one of the founding fathers of the National Film Board of Canada, and author of the pioneering 1935 book A Grammar of the Film: An Analysis of Film Technique. Raised in the U.K., Roger learned his craft in television, working as a documentary editor. In 1971, he was part of the team that cut Sam Peckinpah’s British-made feature Straw Dogs, and he relocated to Hollywood to work on the director’s Pat Garrett and Billy the Kid (1973). He returned to Canada during its era of tax-shelter pictures to make his own directorial debut with the 1980 slasher flick Terror Train. (And he keeps coming back, with six of his 19 theatrical features to date shot here.) He was soon recognized as a craftsman with a knack for choosing challenging projects and, in 1997, he was put in charge of Tomorrow Never Dies, the 18th “official” James Bond adventure. Roger Spottiswoode’s diverse interests show through in the four films being added to the Reeling Back archive today (with links to each following the Afterword to this posting). He brought to bear a talent for social commentary comparable to Costa-Gavras with his third feature, a thoroughly entertaining examination of reporters covering the 1979 Nicaraguan revolution called Under Fire (1983)

UNDER FIRE. Written by Ron Shelton and Clayton Frohman. Music by Jerry Goldsmith. Directed by Roger Spottiswoode. Running time: 127 minutes. 14 Years Limited Admission with the B.C. Classifier’s warning: Some gory violence, very coarse language and swearing. SENIOR CORRESPONDENT ALEX GRAZIER (Gene Hackman) is going home. Years of reporting the news Under Fire has left him “tired of third-world wars.”
Me too. After years spent turning a blind eye to the events in Vietnam, moviemakers seem in a rush to touch down in every world trouble spot, and the result has been a cycle of perfectly dreadful foreign correspondent melodramas.
So far, we’ve had to suffer through a German reporter's angst in Lebanon (Circle of Deceit / Die Fälschung; 1981), an Australian broadcaster's anguish in Indonesia (The Year of Living Dangerously; 1982) and an Americanized Aussie’s anti-Communist heroics in Laos (Comeback; 1983).
I was beginning to think that Missing director Constantin Costa-Gavras was the only man left in the world capable of making a decent movie in a politically charged setting.
There is, thank the Force, another. With Under Fire, Roger Spottiswoode, the 38-year-old, Canadian-born son of British film theorist Raymond Spottiswoode, makes a major directorial breakthrough.
“You’re going to like this war," radio freelancer Claire Stryder (Joanna Cassidy) assures our hero, newsmagazine photographer Russell Price (Nick Nolte). "There’s good guys, bad guys and cheap shrimp.”
“This war” is the 1979 Nicaraguan revolution, the one in which Sandinista rebels toppled the American-backed government of Anastasio Somoza (René Enriquez). We see it unfold through the eyes of a man whose personal code dictates that "I don’t take sides, I take pictures.”
Price is a pro, a periodista who lives by a deadline, not an ideology. The fact that his new girlfriend Claire is his old friend Grazier’s former lover is more troubling to him than the variously labelled people's struggles that he covers.
Spottiswoode’s previous pictures, 1980’s Terror Train and The Pursuit of D.B. Cooper (1981), betrayed no heavyweight directorial talent. Here, though, he shares with the amazing Costa-Gavras the ability to explore issues within a crackling good story.
Price is determined to get a picture of the never-photographed rebel leader Rafael (Jorge Zepeda). In the process he is caught up in an adventure involving him with Oates (Ed Harris), a cheerfully lethal mercenary, and Jazy (Jean-Louis Trintignant), a charmingly self-effacing spy, in a nicely crafted tale worth the price of admission all on its own.
Between them, screenwriters Ron Shelton and Clayton Frohman provide Spottiswoode with a script that is straightforward without being single-minded. There is insight — as in the moment that a Sandinista urban guerrilla tells Price that "the world is not divided into East and West anymore; it is divided into North and South — but such moments are neither forced nor belaboured.
Much more could be made of the picture’s underlying point of view, the kind of dynamic liberalism that's at the heart of so many 1940s action epics. Like them, though, Under Fire offers its analysis in a solidly entertaining package.

Afterword: Concerns over democracy and human rights notwithstanding, what really matters to the U.S. foreign policy establishment is “stability.”  What we’ve learned over the years is that it is a fundamental concern that favours autocrats, strongmen, war lords, military dictators, and absolute monarchs. Fascists are preferable to social democrats (or, as Fox News would insist, communists), and successive administrations have gone to extraordinary lengths to change regimes seen as a threat to business as usual. The government that came to power in Nicaragua in the wake of the events recalled in Roger Spottiswoode’s Under Fire were deemed to be such a threat.
Three years after the film's release, it came to light that President Ronald Reagan had set in motion a series of measures that came to be known as the Iran-Contra affair. The Contras were a right-wing rebel group — in 1985, Reagan called them “the moral equal of our Founding Fathers” — waging war on Nicaragua’s left-wing Sandinista government. Because Congress had outlawed U.S. funding for them, Reagan’s National Security Council came up with a work-around that involved selling arms to Iran (which was also against the law) and diverting the funds to the pro-American guerrillas in the Central American jungle. It was a mess, the one that's set the tone for American politics and foreign policy to this day.
In 2001, Spottiswoode returned to the subject of U.S. interests in Central America with the made-for-TV movie Noriega: God’s Favorite. In it, Bob Hoskins plays the Panamanian general Manuel Noriega, the CIA asset who ruled his country with the backing of the U.S. until, well, it didn’t back him any more. The invasion that toppled him was an achievement of George H.W. Bush’s presidency. In a more comedic mood, Spottiswoode turned his attention to American meddling in Russian elections. Based on a true story, his 2003 feature Spinning Boris looks at the the team of American political consultants who took credit for Boris Yeltsin’s 1996 presidential win. I have to wonder whether the investigators currently probing Russia’s alleged role in Donald Trump’s election victory will trace it all back to a playbook Yeltsin’s Californian advisors left behind.
Finally, I just have to say that Under Fire, the film that alerted me to Roger Spottiswoode’s talents, benefited immensely from its powerful Jerry Goldsmith score. One of my favourite movie soundtracks, it earned its composer an Oscar nomination.