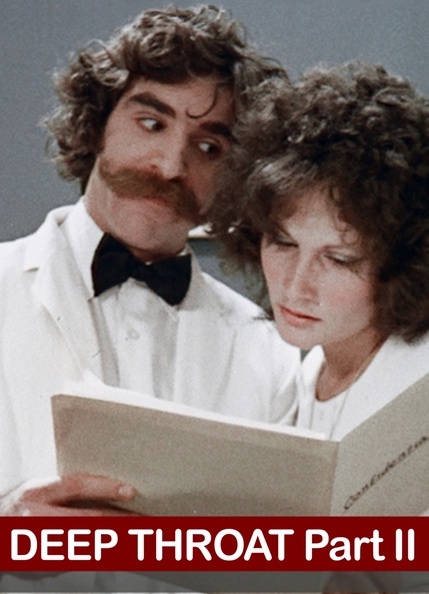 All that she wrote


Second time far from a charm


Her problem could be summed up in the 1965 song lyric: “I can’t get no satisfaction!” Her story, told in the 1972 screen comedy Deep Throat, struck a chord with urban movie audiences open to new cinematic sensations. Written and directed by independent filmmaker Gerard Damiano, the picture told the story of Linda, a young Floridian who is sexually frustrated despite her best efforts. She seeks the help of a sympathetic psychiatrist, and learns that she suffers from an inconvenient mutation — her clitoris is located just above her larynx. The solution to her problem is, of course, frequent fellatio, which she experiences after the doctor hires her as his assistant therapist. Premiered in New York’s World Theatre on this day (June 12) 50 years ago, Deep Throat is remembered as the first shamelessly pornographic movie to achieve mainstream theatrical release in the U.S. Obscenity prosecutions in state and federal courts only served to promote the picture to the public and, according to film historians, an adult film industry was born. Damiano’s feature secured a permanent place in the pop culture when Washington Post Watergate reporters Bob Woodward and Carl Bernstein decided to call their confidential informant “Deep Throat.” Few remember, though, that the influential feature was followed by a forgettable 1974 sequel, director Joe Sarno’s Deep Throat Part II.

DEEP THROAT PART II. Music by Lou Argese and Tony Bruno. Written and directed by Joe Sarno. Running time: 83 minutes. Mature entertainment with the B.C. Classifier's warning: some nudity, coarse language. FRANK YABLANS, THE PRESIDENT of Paramount Pictures, was trying to be funny. Twenty-one months ago [1972], he called reporters together to announce formation of The Directors' Company, a creative corporation that would be built around the talents of three of the U.S. film industry's brightest young men.
Involved were Peter (Paper Moon) Bogdanovich, Francis Ford (The Godfather) Coppola and William (The Exorcist) Friedkin. The conference opened with the Paramount president tucking tongue in cheek, and revealing that the directors were teaming up to co-produce their company's first feature, a sequel to Deep Throat.
Would that it had been so.
Instead, the job went to veteran sexploitation director Joe Sarno, who was given the thankless task of following up the hardcore pornographic phenomenon with a film that would be acceptable to audiences in both the redneck American South and conservative Canada.
With all that responsibility and no real talent, it's no wonder that Sarno completely failed to capture the feeling of erotic exuberance and light-hearted whimsy that made 1972’s Deep Throat a legend in its own time.
And a legend it remains. Yablans, in his press conference, was merely recognizing the unprecedented social, cultural and economic impact that that controversial film had made.
It amassed a string of striking firsts. Among its more impressive accomplishments, Deep Throat was the first hardcore pornographic film to:
●     Make a permanent place for itself on the trade paper Variety's list of all-time box office champions. With gross receipts in excess of $4.6 million, it ranked 11th in Variety's list of the 25 top films of 1973.
●     Be given serious national coverage in such publications as Time, Newsweek and The New York Times.
●     Create a star. Linda Lovelace, a 21-year-old New Yorker with a spray of freckles across her nose (and a deep abdominal scar), was the first personality to achieve national prominence for no achievement other than her performance in a pornographic film.
The longest-running movie ever to play Blaine, Washington, it was seen by an estimated 100,000 residents of B.C.’s Lower Mainland, most of whom will probably be curious about the sequel.
Lest anyone be misled, though, let me emphasize that the film currently on view on Granville Street is not Deep Throat. The original film has never been seen legally anywhere in Canada.
A sprightly comedy, the original Deep Throat ran a tight 73 minutes (although the Blaine version clocked in about 10 minutes shorter). It contained explicit portrayals of almost every kind of sex act, including Miss Lovelace's distinctive specialty, a variation on sword-swallowing that experts agreed was nothing short of phenomenal.
Deep Throat Part II reunites the original film's stars – Miss Lovelace and Harry Reems – and attempts to rekindle the successful satiric brushfire. Unfortunately, the original project's sparkplug, writer-director Gerard Damiano, took no part in the proceedings.
The result, in a word, is a rip-off. A foolish, flagrant attempt to cash in on the notoriety of the original, it is a witless pastiche that looks more like a fun-night show on television’s Camp Runamuck than a professionally-made motion picture.
Sluggish and disjointed, despite the fact that it's only 83 minutes long, Deep Throat Part II bottoms out very quickly. At times, it seems as if it will never end.
*    *    *
TRUTH IN ADVERTISING: According to its made in the U.S.A. TV ads, Deep Throat Part II is “rated R.” In its local newspaper advertising, the Eve Theatre displays the familiar black cougar, symbol of B.C.’s Restricted category.
The R-rating, of course, applies only in the U.S. Such ratings are assigned by an organization called the Motion Picture Association of America (MPAA), and have no legal status in Canada.
The B.C. cougar is prowling  on behalf of the film Forbidden Decameron, an Italian-made sex comedy that really is Restricted entertainment. As for its companion feature, Deep Throat Part II, the official B.C. rating is the milder Mature.

Afterword: The brief description in the above notice is the closest I came to actually reviewing 1972’s Deep Throat during my time on the movie beat. The era of “porno chic” — a term coined in 1973 by New York Times feature writer Ralph Blumenthal — was something that those of us who wrote for so-called “family newspapers” could not ignore. How to deal with it was another matter. I considered myself to be a civil libertarian, and wrote that way. As a result, during my first decade as a daily newspaper film critic I made four court appearances, where my "expertise" on contemporary community standards was cited by the defence, and questioned by the prosecution.
After Deep Throat and its 1974 sequel, Linda Lovelace appeared in just one more feature film, director Claudio Guzman’s 1975 political satire Linda Lovelace for President. She visited Vancouver to promote that picture, and we sat down for this interview. For more on the career of director Gerard Damiano, read my review of his 1981 feature Beyond Your Wildest Dreams.
Pornography is considered both as a genre and as an issue in my reviews of Insatiable (1980) and Up 'n' Coming (1983), as well as in my two interviews with actress Marilyn Chambers in 1980 and 1983. Earlier consideration of the issue can be found in my reviews of the 1976 Alice in Wonderland and The First Nudie Musical (1976). In 1979, I wrote two reviews of director John Derek’s X-rated Love You!, one for the Province and another for the entertainment trade paper Variety.
A documentarist's view is examined in Not a Love Story: A Film About Pornography (1981). The issue of sex in the cinema in the mid-1950s was the subject of The Notorious Bettie Page (2005).