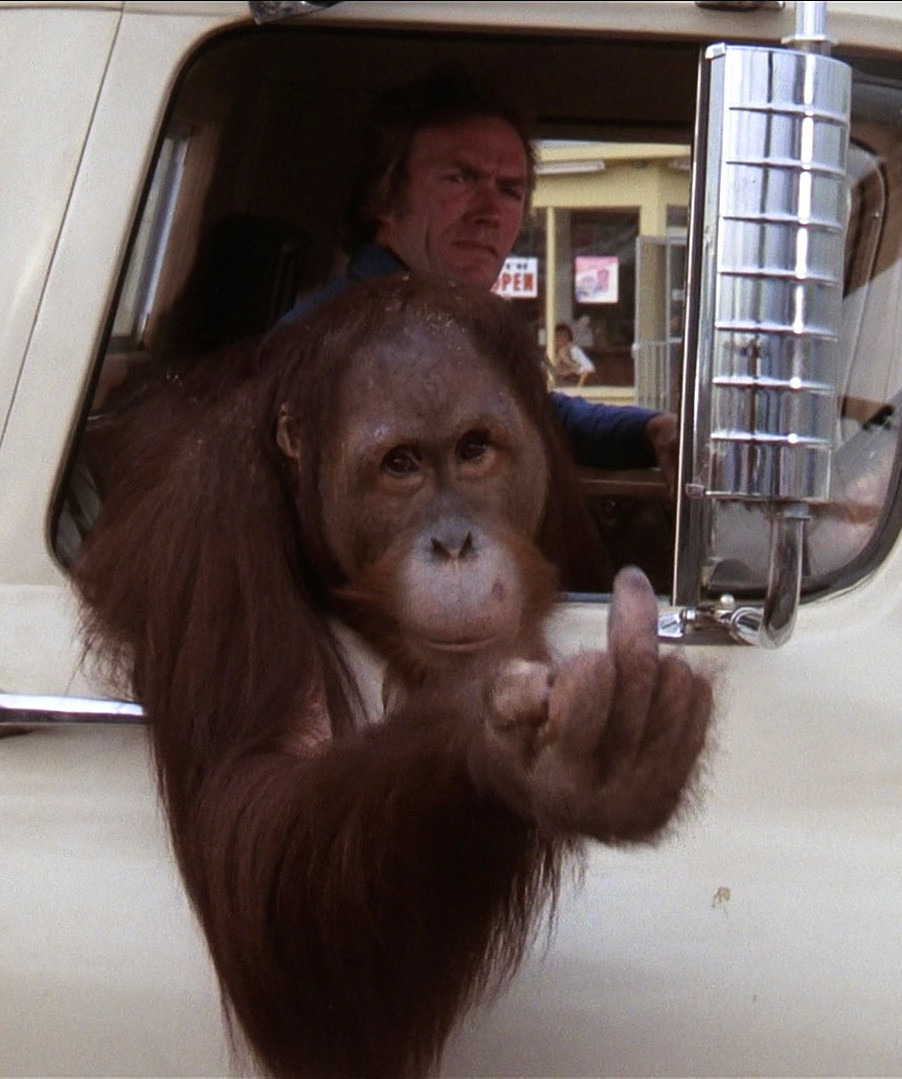 Out riding with his buddy Philo Beddoe (Clint Eastwood), Clyde (C.J. the Orangutan) gestures to critics of director Buddy Van Horn’s 1980 comedy Any Which Way You Can.

Best buddy to a brawler


Primatologists worldwide are marking International Orangutan Day (August 19), an annual celebration focused on the threats to Southeast Asia’s “old man of the forest.” Clint Eastwood will recall the one who played Clyde, his co-star in 1980’s Any Which Way You Can.

ANY WHICH WAY YOU CAN. Written by Stanford Sherman. Based on characters created by Jeremy Joe Kronsberg. Music supervision by Snuff Garrett. Directed by Buddy Van Horn. Running time: 116 minutes. Mature entertainment with the B.C. Classifier’s warning: some suggestive scenes, violence, coarse language and swearing. CLINT EASTWOOD MOVIES USED to be interesting. Regardless of how silly or superficial they seemed to be, you could usually count on something worthwhile going on beneath the surface.
Take a cornball comedy like 1978’s Every Which Way But Loose, for example. The picture was a mess, but buried within a lot of nonsense was a story of lost innocence.
Its hero, street brawler Philo Beddoe (Eastwood) is right out of a country-and-western song. It's not until he meets Lynn Halsey-Taylor (Sondra Locke) that he realizes how out of touch he really is.
When they meet she is singing (indifferently) with the band in the bar where he goes to drink beer. He is smitten. She reciprocates. Then she leaves him.
The film is the story of Beddoe’s journey to find his lost love, a quest bedevilled by various vengeance-seeking cops and a motorcycle gang that the brawler has managed to humiliate along the way.
When he finds her, he is shattered to learn that she’s not the woman he thought she was.
Not only does Lynn already have a steady boyfriend, but she supports him by turning tricks on the side. Philo was an episode, not her life’s romance.
They part, with our hero a sadder but wiser lad. Although it looked as if it had been directed by Philo’s orangutan buddy Clyde, Every Which Way But Loose was blessed with a solid country music score.
It became Eastwood's biggest money-maker ever. Naturally, distributor Warner Brothers called "encore, encore.”
The result, Any Which Way You Can, is an even bigger mess. An attempt to duplicate the box office success of the previous film, it is the most empty thing that I’ve ever seen Eastwood do.
It is almost as if producer Fritz Manes had ordered up a computer analysis of the laugh patterns in Every Which Way, and then told screenwriter Stanford Sherman to accentuate the positive.
This time around, the ape’s part has been expanded. Locke’s role, on the other hand, is less important, and her character has been cleaned up (no more whoring for li'l Lynn).
The bikers are back, as are Philo’s landlady, the eccentric Ma Boggs (Ruth Gordon), and her son Orville (Geoffrey Lewis), Philo’s human best buddy.
Romance, however, must have scored pretty low on the laugh metre. It has been replaced by some crude comedy scenes involving ape mating and the idea of geriatric sex.
The plot, what there is of it, has big time gambler James Beekman (Harry Guardino) promoting an illegal bare-knuckle battle between Philo and East Coast streetfighting champ Jack Wilson (William Smith). When Philo announces that he’s retired, Beekman has Lynn kidnapped to renew the old brawler’s interest in the fight game.
Personally, I thought Philo was well rid of her in the first film. There’s just no accounting for some people’s taste, now is there?
*    *    *
According to the publicity folks at Warner Brothers, director Buddy Van Horn’s Any Which Way You Can contains “the screen brawl of the decade.” A studio press release insists that the climactic dust-up between Clint Eastwood and William Smith is "the longest, toughest, most spectacular unprecedented man-on-man punchout ever filmed."
They must be referring to the 1980s, a decade that is yet young. Either of the Sylvester Stallone-Carl Weathers matches (in 1976’s Rocky, and again in 1979’s Rocky II) was more exciting.
The bare-knuckle battle between Charles Bronson and Robert Tessier in 1975’s Hard Times certainly looked tougher. Nor was there anything in the current film to compare to the classic barroom brawl started by Alan Ladd and Ben Johnson in 1953’s best-picture Oscar nominee Shane.
Studio hand-out hyperbole notwithstanding, there’s never been a “man-on-man punchout” as spectacular as the one in 1952’s The Quiet Man. Under the direction of John Ford, John Wayne and Victor McLaglen duked it out in the fight scene that remains the best screen brawl of all time.

Afterword: I can assure you that International Orangutan Day is for real. Supported by more than 30 animal rights groups including Greenpeace and the World Wildlife Fund, it exists to raise awareness of the dangers facing our primates cousins and prevent their extinction.What I can’t tell you with any assurance is what happened to Clint Eastwood’s orangutan co-star in Any Which Way You Can.
Sources agree that Manis, who originated the role of Clyde in 1978’s Every Which Way But Loose, did not appear in the sequel. Apparently the talented ape had grown too large to reprise his role, and is believed to have disappeared into honourable retirement. Sources are less clear about Manis’s successor, an orangutan whose name does not appear in the second film’s screen credits. The IMDb includes the name “C.J. the Orangutan” among those who made uncredited appearances in the picture. There are those that assert (without verifiable sourcing) that C.J. was subject to abuse from his trainer and died of a cerebral hemorrhage shortly before the film’s release. If that’s true, then perhaps his gesture in the photo accompanying the above review reflects C.J.’s true feelings about show business.

See also: Among the other films in the Reeling Back archive in which we see an ape suffering for his art are the original King Kong (1933), and its 1976 remake, also called King Kong. Clint Eastwood fans may wish to check out my reviews of The Eiger Sanction (1975), Pink Cadillac (1889), Unforgiven (1992) and A Perfect World (1993).