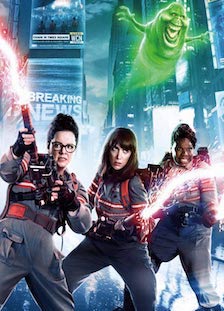 Abby Yates (Melissa McCarthy), Erin Gilbert (Kristen Wiig) and Patty Tolan (Leslie Jones) aren’t afraid to cross the streams in director Paul Feig’s 2016 version of Ghostbusters.
THE WHOLE STORY — To see a complete list of the 1,217 items currently posted to Reeling Back, visit the FULL SITE INDEX. To locate specific names or subjects, type your key word(s) into the Search box (located in the right-hand corner of the nameplate above), and click on the magnifying glass (search) symbol. The archive grows with some regularity, so feel free to explore.


We’re midway through 2022’s Black History Month (February 15), and the conversation now includes such terms as BIPOC and the controversy around “critical race theory.” Most interesting to me is the intersection of women’s issues with the movements advocating for minority rights.

For a time, it seemed that Black History Month had become neglected, perhaps even irrelevant. Then, in 2019, New York Times investigative reporter Nikole Hannah-Jones, a black feminist, launched something called The 1619 Project. Keyed to the 400th anniversary of the arrival of the first Africans in Virginia, it emphasized the centrality of slavery to American history.

The resulting push-back from white supremacists — including legislation to ban the teaching of the suddenly controversial “critical race theory” — only confirmed the truth of Hannah-Jones’s thesis. At the same time, we saw the term BIPOC (Black, Indigenous and People Of Colour), an acronym coined sometime in 2013, suddenly enter the language in a big way.

When the women’s rights movement finally recognized that its goals had much in common with Black Lives Matter, a powerful alliance resulted. It was the moment that the streams crossed. And, yes, the reference is to director Ivan Reitman’s comedy classic Ghostbusters in which the team ultimately defies Egon Spengler’s warning to “never cross the streams” of their proton energy weapons, the move that defeats god of destruction Gozer. Remade in 2016 with an all-female team, its diverse casting represented an assertive female-empowerment trend in the popular culture.

Racialists are feeling the earth shifting beneath their white, male feet. They are desperate to regain control of a narrative that served them so well for so long, and their panic is showing.

I see evidence of the streams crossing in my recent TV viewing, a selection of shows that often feature a BIPOC female at the centre of the action. It doesn’t get more diverse than the current CW series Batwoman. The title character, played by Javica Leslie, is a black lesbian supported by a team that includes white and Asian stepsisters (Rachel Skarsten and Nicole Kang), and a black male tech genius (Camrus Johnson).

Then there is CBS’s current reboot of The Equalizer, in which the title character is now black and a single mom. Played by Queen Latifah, vigilante do-gooder Robin McCall is backed by Asian-American female Mel Bayani (Liza Lapira) and white male Harry Keshegian (Adam Goldberg). Even more confrontational is the CW’s 4400 reboot, a re-imagining of the science fiction series that uses its time-travelling premise and powerful female characters to confront a century’s worth of black history issues.

In January, the CW offered up Naomi, yet another comic book crossover. Kaci Walfall stars as the teenaged title character, a black foundling raised by a mixed-race couple. In the second episode, Naomi learns that she is an alien who arrived on Earth from a Krypton-adjacent world. Her quest will benefit from the help of another racially diverse collection of characters.

These shows' women can be real — Alex Irving (Deborah Mailman), the angry Aboriginal parliamentary candidate in the Australian political drama Total Control — or surreal — the teen besties (Jana Morrison, Samantha Aucoin) who open a portal to another dimension in CTV’s new high-school fantasy Astrid and Lily Save the World. What these women can’t be is ignored.

I can't help but hope that their crossing of the streams within the popular culture will be a game changer. That said, I’ll return to building my Reeling Back archive. February has seen eight additions to the archive so far, including:

THE LAST BUFFALO — Director Steven Low contrasts the art of William Lishman with the wonders of the natural world to create a work of cinema poetry in this 1990 IMAX 3D documentrary short. (February 12)

RHINESTONE — Dolly Parton and Sylvester Stallone unleash their star power in this 1984 tale of country music and urban cowboys, a comedy directed by Bob Clark.  (February 7)