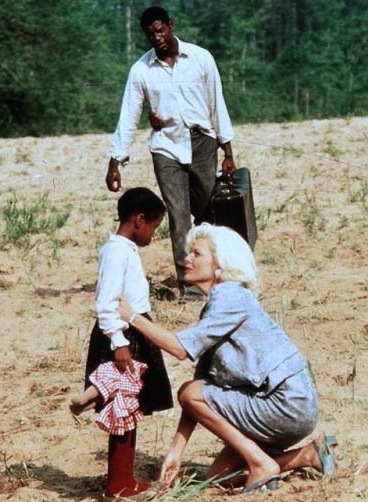 Paul Cater (Dennis Haysbert) fears that no good will come of the interest that fellow traveller Lurene Hallet (Michelle Pfeiffer) is taking in his six-year-old daughter Jonell (Stephanie McFadden).


Fired 50 years ago, they were the shots heard down the years. To this day their number and source remain matters of dispute. Their result, the death of the 35th President of the United States, left its mark upon a generation. John Fitzgerald Kennedy was not the first president to be assassinated, but he was the first in an age of mass media. The world (and the movie world), has shared the shock, the grief and the questions about the event ever since. Originally the subject of documentary, the story of that day in Dallas was eventually taken up by fictional film makers, whose creations would rekindle powerful feelings of anger and loss. Yesterday, Reeling Back looked at the 1973 conspiracy thriller Executive Action and Oliver Stone's "counter-myth" JFK (1991). Today, we continue with Ruby, the 1992 drama that views the story through the eyes of Lee Harvey Oswald's killer, Jack Ruby, and Love Field (1993), a tale of two strangers bound together by the tragedy. We'll finish up tomorrow with 1984's second-gun thriller Flashpoint and the darkly comic Winter Kills (1979).

Sunday, February 14, 1993.
LOVE FIELD. Written by Don Roos. Music by Jerry Goldsmith. Directed by Jonathan Kaplan. Running time: 104 minutes. Mature with the B.C. classifier's warning "occasional violence and very coarse language." THE NATIONAL TRAGEDY brings them together.
If John Kennedy had not died in Parkland Hospital, dotty Dallas housewife Louise Irene "Lurene" Hallet (Michelle Pfeiffer) would not be on the Greyhound bus to Washington, D.C. She would never have met Paul Cater (Dennis Haysbert), an African-American single father travelling with his six-year-old daughter, Jonell (Stephanie McFadden).
An anonymous tragedy brings them together. In the darkness of a Tennessee night, a speeding car passes their bus, then crashes into a jack-knifed semi-trailer.
While state troopers are questioning witness Paul, Lurene jumps to the conclusion that he is a kidnapper. She's both right and wrong, and soon the three of them are on the run in a stolen car.
In his superb 1985 book, A Certain Tendency of the Hollywood Cinema, film historian Robert B. Ray looked at movie-making the American way. There is an "industrywide consensus," he said, and it insists on "the conversion of all political, sociological and economic dilemmas into personal melodramas."
For the Boom generation, the Kennedy assassination was a social dilemma of cataclysmic proportions. Director Jonathan Kaplan's well-intended Love Field is yet another attempt to find some meaning in that mind-numbing event.
His vehicle is the melodrama of two people searching for meaning in their lives. An unlikely tale, it gains power and even credence from the larger event providing the emotional backdrop.
As played by the versatile Pfeiffer, Lurene is a great-hearted young wife trapped in an increasingly loveless marriage. Grieving the loss of her own baby, she takes strength from her deep personal identification with First Lady Jacqueline Kennedy (look-alike actress Rhoda Griffis).
Lurene is at Dallas's Love Field on November 22 to see the presidential party arrive. That evening, she makes up her mind to attend JFK's state funeral in Washington.
Paul, we eventually learn, has stolen his daughter from a physically abusive orphanage. Lurene's sincere attempts at colour-blind helpfulness only serve to make his difficult situation more dire.
Without the dramatic resonance of the assassination, Don Roos's screenplay could be a romantic road comedy, full of the "fine messes" into which ditsy do-gooder Lurene gets the travellers.
With it, Kaplan forces us to consider the anguished truth in Paul's rebuff to troubled Lurene. "Don't you dare think we're the same," he says. "Being bored and being black are not the same."
Kaplan, who guided Jodie Foster's Oscar-winning performance in The Accused, effectively states the case against his couple becoming a couple. Then, with attention to the "industrywide consensus," he offers the possibility of a happy ending, something to give individual meaning to unfathomable fate.
It's the Hollywood style and the American way.

Afterword: A California girl with beauty-queen good looks, Michelle Pfeiffer seems to have spent much of her career in roles designed to prove that, yes, she really can act. Sympathetic to her plight, the Academy of Motion Picture Arts and Sciences provided her with Oscar nominations in 1988 (best supporting actress for her role in director Stephen Frears's period piece Dangerous Liaisons); in 1989 (best actress for her unforgettable star turn in The Fabulous Baker Boys); and finally in 1992 (best actress for Love Field). She's even played played Shakespeare (the fairy queen Titania in the 1999 screen adaptation of A Midsummer Night's Dream). Yes, she can act. Now, can I admit that my all-time favourite Pfeiffer performance is Selina Kyle, the Catwoman in 1992's Batman Returns? Meee-ow!