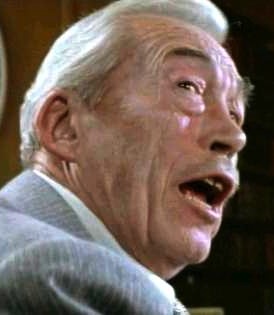 As played by John Huston, political patriarch Pa Kegan is a brilliantly gross mad Caesar, the man at the centre of dark doings in Winter Kills.


Flashpoint in light of Winter Kills


Fired 50 years ago, they were the shots heard down the years. To this day their number and source remain matters of dispute. Their result, the death of the 35th President of the United States, left its mark upon a generation. John Fitzgerald Kennedy was not the first president to be assassinated, but he was the first in an age of mass media. The world (and the world of the movies), has shared the shock, the grief and the questions about the event ever since. Originally the subject of documentary, that story of that day in Dallas was eventually taken up by fictional filmmakers, whose creations would reignite feelings of anger and loss. So far, Reeling Back has looked at 1973's conspiracy thriller Executive Action, Oliver Stone's JFK (1991), the story of Lee Harvey Oswald's killer Jack Ruby (1992) and the days-after drama Love Field (1993). Today, we conclude with two films that view the tragedy from a distance. In Flashpoint (1984), Border Patrolmen find evidence of a "second gun" shooter, while the 1979 black comedy Winter Kills re-imagines the events as a rite of passage practiced by the super-rich.

Monday, May 2, 1983
WINTER KILLS. Based on the novel by Richard Condon. Music by Maurice Jarre. Written and directed by William Richert. Running time: 96 minutes. Mature entertainment with the B.C. Classifier's warning: some coarse language, occasional nudity and violence. RICHARD CONDON THOUGHT he was writing a satire. "I meant [Winter Kills] to be a revelation of the interlocking defences and assault systems of a really modern conspiracy against a single man," he explains in the current [May, 1983] Harper's Magazine.
When he eventually saw the film based on his 1974 book, he found it "hugely entertaining . . . It made all of  the points that the novel had set out to make, but made them far more comically."
For reasons not entirely clear, the picture's original distributor, Avco Embassy, offered it to the public not as a comedy, but as a political thriller. It was, according to a May, 1979, Variety review, "the tale of wealthy family patriarch John Huston, whose elder son was a President slain 19 years before the pic's beginning and younger sibling Jeff Bridges, now after his brother's killer(s)."
Variety went on to offer the opinion that "[writer-director William] Richert had revised Condon's novel for unintentional comic effect." I saw the film during its brief local run and, expecting a Costa-Gavras-like drama, was disappointed.
Last week, Harper's arrived on newsstands with Condon's tongue-in-cheek memoir of the affair: "Who Killed Winter Kills? — The case of the vanishing movie involving a murder, a 40-year drug sentence, Liz Taylor's repossessed fur coat, and possible skulduggery at the highest levels."
By a happy coincidence, Winter Kills has just now reappeared, booked into the Bay Theatre by its new domestic distributor, Pan-Canadian of Toronto. This time, the advertising campaign stresses the black comedy.
Guess what? Sitting through the film again late last week, I really was able to enjoy it, not as a sensationalistic roman a clef, but as a mind-boggling comment on conspiracy-oriented political paranoia.
Over the years, movie makers have evolved two distinctly different ways of characterizing the super-rich. One approach would have us believe that the wealthy are "just folks," fellow beings with the same feelings and emotions as the rest of us.
The other assumes that they are a species apart, a race of alien beings somewhat demonic in their use of personal power. Winter Kills subscribes to this second view.
What it shows us is a modern ritual of succession. What we see is an heir apparent who is tested to determine his worthiness to succeed his father, the aging god-king.
Before he can do this, he must learn the truth about himself, his class and their mission to rule. Put into the context of a Kennedy-like family, the story becomes grand myth, as seen through the eyes of the National Enquirer.
View it as satire and there's no faulting the cast. As Nick Kegan, Jeff Bridges is a fine Candide to John Huston's brilliantly gross mad Caesar. They get solid support from a small army of familiar faces, among them Anthony Perkins, Eli Wallach, Richard Boone, Toshiro Mifune, Dorothy Malone, Sterling Hayden and an unbilled Elizabeth Taylor.
Viewed as comic parable, the picture's satirical cutting edge not only becomes apparent but its consistent, entirely intentional humour begins to work.
It's not impolite to laugh out loud during Winter Kills.
It's expected.

Afterword: Fifty years on, I recall the numbness that I felt during Executive Action (and the tears that welled up while writing about JFK) with a sense of bemusement. At the time the emotion was real, my response to a genuine sense of loss. Today, I've come to believe that what we lost wasn't real to begin with. The historical record (as opposed to the popular culture) has not been kind to John Fitzgerald Kennedy. Like the current incumbent, he sold himself as an agent of positive change. His sudden death left his political story without an ending. Each one of us was left to mourn his own preferred version of Camelot. What the passing years have provided us with are the "multiple viewpoints" beloved of communications theorist Marshall McLuhan, adding complexity to our understanding of the moment. Director David Miller's rough-hewn Executive Action offered an alternative narrative, one that was polished into "counter myth" by Oliver Stone in his JFK. By the mid-80s, the "second gun" was a familiar-enough fictional trope that Flashpoint director William Tannen could use it as the basis for a cop-buddy movie. Real or not, identification with the Kennedy charisma was central to the behaviour of Michelle Pfieffer's character in Love Field. In Ruby, a very British take on a marginal historic figure, the tale was drained of all romance, making it possible to return to Winter Kills with fresh appreciation for its National Lampoon-like nihilism.