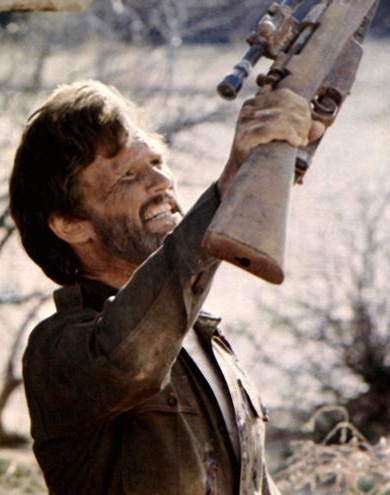 
Flashpoint in light of Winter Kills


Fired 50 years ago, they were the shots heard down the years. To this day their number and source remain matters of dispute. Their result, the death of the 35th President of the United States, left its mark upon a generation. John Fitzgerald Kennedy was not the first president to be assassinated, but he was the first in an age of mass media. The world (and the world of the movies), has shared the shock, the grief and the questions about the event ever since. Originally the subject of documentary, that story of that day in Dallas was eventually taken up by fictional filmmakers, whose creations would reignite the feelings of anger and loss. So far, Reeling Back has looked at 1973's conspiracy thriller Executive Action, Oliver Stone's JFK (1991), the story of Lee Harvey Oswald's killer, Jack Ruby (1992) and the days-after drama Love Field (1993). Today, we conclude with two films that view the tragedy from a distance. In Flashpoint (1984), Border Patrolmen find evidence of a "second gun" shooter, while the 1979 black comedy Winter Kills re-imagines the events as a rite of passage practiced by the super-rich.

Friday, September 14, 1984
FLASHPOINT. Written by Dennis Shryack and Michael Butler based on the 1976 novel by George La Fountaine. Music composed and performed by Tangerine Dream. Directed by William Tannen. Running time: 95 minutes. 14 Years Limited Admittance with the B. C. Classifier's warning: some violence, very coarse language and swearing. THEY'RE NOT JUST working partners, they're buddies. At 42, Bob Logan (Kris Kristofferson) is the older. A Vietnam vet and former Green Beret hero, he enjoys the freedom of life as an anonymous Border Patrolman in the South Texas desert.
Ernie Wyatt (Treat Williams), Logan's junior by about 15 years, is more tightly wound. Less sure of himself, Wyatt still has anger, ideals and a temper with a low Flashpoint.
They like to have fun together, teaming up to put the make on telephone operators Doris (Jean Smart) and Ellen (Tess Harper). They share a house, and also the frustration of technological change, with its potential threat to their job security.
One afternoon in the wilderness, Logan comes across the mostly buried remains of a single-jeep accident. Disinterring the vehicle, he discovers a tool box containing $800,000 in small bills, "a ticket out of here" that he's anxious to share with his friend Wyatt.
What they don't know is that the victim, one Michael J. Curtis (Robert Elliott) of San Antonio, met his fate some 20 years earlier, in the wee hours of the morning of November 23, 1963, while in hasty flight to Mexico.
Their private investigation of the matter is quickly noted in high places, and a sinister fed, one Inspector Carson (Kurtwood Smith), soon arrives on the scene from Washington.
First-time feature director William Tannen knows how to push our buttons. A veteran of TV's commercial wars, Tannen builds on his talent for the 60-second spot to produce an action-thriller that remains watchable despite its telegraphed "surprise" ending.
Based on George La Fountaine's 1976 novel, this is a late entry in the "second gun" Kennedy assassination conspiracy stakes. Wisely, Tannen chooses to hold our attention, not with recollections of past mysteries, but with some solid present-day relationships.
Making it come alive with high spirits and, eventually, high tragedy, are Williams and Kristofferson. A pair of likeable, skilled performers, they turn Flashpoint's predictable plotline into passable entertainment.

Afterword: Thirty years later, what gives Flashpoint (the first theatrical feature produced by HBO Films) renewed currency are the the still-pertinent themes of border security, illegal aliens, the misuse of technology and, of course, the war on drugs. To drive the point home there's even a scene in which the picture's bad guy, the federal agent played by Kurtwood Smith, tells Kris Kristofferson's character that he "thanks God every day" for crime and criminals, together with drugs and murders, because they give his life meaning, to say nothing of a job. "If they didn't exist, we'd manufacture them," he says, displaying the self-serving cynicism that has become all too common among TV and movie lawmen today.