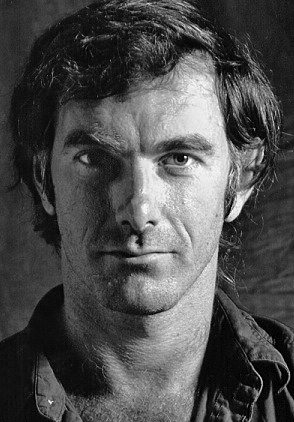 Unlike Hollywood's studio executives, writer-director John Sayles was not afraid of original ideas in the early 1980s.


On the road to promote his directorial debut feature, The Return of the Secaucus Seven, independent filmmaker John Sayles sat down with me in Vancouver to discuss the challenges involved in working outside of Hollywood's studio system.

JOHN SAYLES IS A MODERN realist. A novelist and screenwriter, he has peopled his directorial debut film, The Return of the Secaucus Seven, with characters "from (America's) first downwardly mobile generation."
Set in rural New England, his picture chronicles the weekend-long reunion of seven young adults, "a small circle of friends" who shared the experience of college in the 1960s. They are, according to their creator, people who are "willing to take a loss to do what they want."
In that, they are not unlike John Sayles, a 31-year-old writer who was well on his way to becoming a Hollywood "hot property" when he took an apparent career loss to do what he wanted. Gathering together his savings from six successful screenplay sales, he retreated east to finance, write, direct, act in and edit his own first feature.
"I had always been interested in directing and I had directed some theatre," he says. "But seeing how people had made the jump from being a screenwriter to a director, I saw a good five years of writing screenplays ahead before I got that kind of opportunity to say 'if you want this script, you have to let me direct it.' "
In Vancouver to promote the Western Canadian premiere of his picture, Sayles describes Return as "sort of a comedy." Its subject and style was dictated by its budget — a $40,000 project that eventually cost $60,000 — and his determination that "if I'm going to make something outside the industry, it might as well be something the industry isn't going to make.
"One thing I realized, with $40,000, is that the actors I could get who would be good had to be people who weren't in the Screen Actors Guild yet." That meant that he was looking at actors "who were all turning 30."
New Hampshire offered locations that were both fresh and free. Sayles decided to base his film on "a group of people I met when I lived in East Boston during the mid-1970s. They were in their early 30s and they were making decisions that their parents had made when they were 19, (decisions) like whether to go back and finish college, whether to get married and have children."
They were, according to Sayles, "people that I hadn't seen on the screen before."
Sayles arrived in Hollywood in 1978, a young writer with two novels to his credit  — 1975's Pride of the Bimbos and 1977's Union Dues — and the desire to try his hand at screenplays. As luck would have it, "the story editor at New World Pictures reads books, and she called my agent."
Sayles was asked to rewrite the script for a 1978 film called Piranha. New World, the production company owned and operated by the legendary Roger Corman, had test-marketed the title and wanted a strong storyline to go along with it.
Sayles came through, earning himself a reputation as a reliable "script doctor," and more work with Corman. The Lady in Red (1979), Battle Beyond the Stars (1980), Alligator (1980), and The Howling (1981) followed, giving Sayles experience with several different slam-bang film genres and giving their B-budget directors some better-than-average screenplays.
Soon, the A-budget people came courting. Recently Sayles developed a science fiction concept called Night Skies for Steven (Raiders of the Lost Ark) Spielberg. In addition, he's written Blood of the Lamb, a look inside fundamentalist religious cults for The Ladd Company, and a high school romance called Baby It's You for 20th Century-Fox.
In the process, Sayles discovered that "Hollywood is a bit frightened of original ideas." Rather than wait on the established industry, he's decided to move ahead on his own.
From his home base in Hoboken, New Jersey ("where On the Waterfront was shot"),   Sayles has started work on his second independent feature, a $300,000 drama called Lianna. In production since October 19 [1981], it is the story of a female college student who married her professor.
After 13 years of marriage, she returns to the classroom and falls in love with her night school teacher, who happens to be a female. "There are subjects that l'm interested in making films about that I don't think the studios are appropriate for."

Afterword: Celebrating his 65th birthday today (September 28), John Sayles has directed 17 theatrical feature films since The Return of the Secaucus Seven, all but one of them independent of the Hollywood studio system. (The exception, 1983's Baby It's You, was financed and released by Paramount Pictures.) The Night Skies screenplay that he mentioned in our interview was written but not produced. It is said to have provided inspiration for two other Spielberg features, though: 1982's E.T. the Extra-Terrestrial and Poltergeist (also 1982). Blood of the Lamb remains unfilmmed.
Described in a 2009 Believer magazine profile by Antonino D’Ambrosio as "the godfather of bootstrap cinema," Sayles can look back on a body of work that illuminates, with a measure of wit and empathy, the issues affecting marginalized Americans. His second feature, 1983's Lianna, marked the feature film debut of Canadian actress Linda Griffiths. A pioneering treatment of gender, it was followed by Sayles's satire on race, The Brother from Another Planet (1984) and a powerful study of U.S. labour relations, Matewan (1987). All of these films were produced by Maggie Renzi, who starred in The Return of the Secaucus Seven, and who'd become Sayles's life partner in 1973. In May of this year (2015), the couple were in Port Townsend, Washington, where they scouted locations for his planned 19th feature, To Save the Man. Based on the story of the Carlisle Indian Industrial School, it will focus on a late 19th-century effort to “rehabilitate” black and Native American youths so they could assimilate into white society. Similar to the residential schools familiar to Canada's First Nations, the institution sought to "save" its students by erasing their culture. If the financing comes together, filming will begin in July 2016, Renzi told Peninsula Daily News reporter Charlie Bermant.