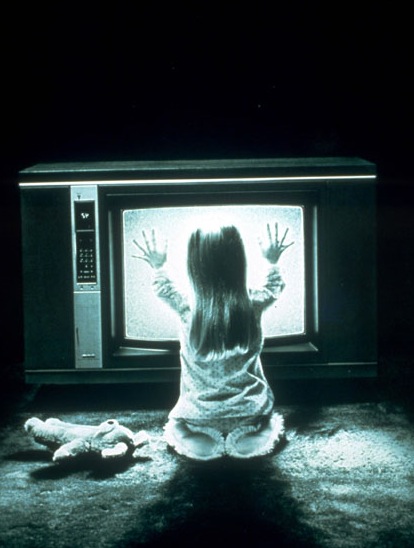 Carol Anne Freeling (Heather O'Rourke) is the first to sense that something is seriously weird in the suburban world of director Tobe Hooper's 1982 Poltergeist.


On Friday (May 22), a remake of the 1982 horror classic Poltergeist went into release. It became the latest entry in a long list of movies that recycle old ideas in pursuit of new profits. Occasionally a remake will be the work of a filmmaker genuinely inspired by the original, and talented enough to make improvements. (Canadian director David Cronenberg managed to do just that with his 1986 version of The Fly, based on a 1958 summertime shocker.) By and large, though, remakes are disappointing attempts to capitalize on the name recognition of the original work. Did the world really need yet another big screen Annie, Carrie, Mad Max or Teenage Mutant Ninja Turtles? Though they can be art, with the all the timeless qualities that implies, movies are most often of their time and place, fixed in the moment that produced them. As much as anything, 1982's Poltergeist spoke to an audience experiencing Ronald Reagan's "Morning in America," offering them a congenial horror show in which the shocks were laced with wry suburban humour. It goes without saying that 2015 is a different time. Filmed in Toronto and Hamilton, Ontario, the remake is the work of producer Sam Raimi working with British-born director Gil Kenan. Whether their 3D feature falls into the category of classic or crass cash grab remains to be seen.


"All I can say about my involvement overall is that I wrote the
movie . . . I'm saying that I was the David Selznick of this movie."
— Steven Spielberg, of Poltergeist.

PERHAPS IT DOESN'T MATTER who the director was. Once on the screen, a movie speaks for itself and, in the case of Poltergeist, the final product is the classiest horror film since 1973's The Exorcist.
Still, there is some curiosity. Texas-born Tobe Hooper, the picture's director of record, never made a movie like Poltergeist before. There is a gentleness and humour (to say nothing of boiling cloud formations) quite out of character for the man who made 1974's The Texas Chainsaw Massacre, The Funhouse (1981) and the TV movie Salem's Lot (1979).
Ohio-born Steven Spielberg is credited with the story, co-authorship of the script and co-production of the film. As a director, Spielberg's efforts include 1975's Jaws, Close Encounters of the Third Kind (1977 ) and Raiders of the Lost Ark (1981), a collection of financial super-hits that will soon be joined by this summer's E.T. The Extraterrestrial.
In a recently published interview, Spielberg compared his Poltergeist role to that of David O. Selznick, the force behind 1939's Gone with the Wind. Very much a hands-on producer, Selznick went through at least four directors during the making of his civil war saga.
"It was widely reported," notes Variety's Todd McCarthy, that (Spielberg) relieved Hooper much the way Howard Hawks did Christian Nyby 30 years ago on The Thing [1951]."  What matters to an audience, of course, is the result. In this instance, it turns out to be an absolutely classic haunted house epic.
Poltergeist is set in Cuesta Verde, a California housing development almost identical to the one in E.T. It opens late at night with a TV set blaring out its sign-off rendition of The Star-Spangled Banner.
The family dog finds Steve Freeling (Craig T. Nelson) asleep in the living room, then trots about the house introducing us to its family. Steve's wife Diane (JoBeth Williams) is asleep in her second-floor bedroom, as is their 16-year-old daughter Dana (Dominique Dunne) and eight-year-old Robbie (Oliver Robins), both in their own rooms.
Only five-year-old Carol Anne (Heather O'Rourke) is awake. We see her descend the staircase, her movements made eerie by the flickering, stroboscopic light still emanating from the snow-filled TV screen. We see her sit before the set and engage in quiet, conspiratorial conversation with the non-images.
Before getting involved in the Poltergeist project, Spielberg seems to have set out some personal ground rules. Unlike many fright filmmakers, he remains sympathetic to his characters throughout.
This means that the individuals are allowed to act reasonably, given their bizarre circumstances. No dim-witted, diaphanously-gowned heroines climbing dark stairways into obvious danger here.
Since his characters act like real people, there is a fair amount of humour in his film. The Freelings, normal middle-Americans, suddenly experience things that are quite inexplicable.
Their response is bemusement and embarrassment. I mean, just how do you tell your next-door neighbours that your kitchen furnishings move by themselves?
There is something in the house. Carol Anne talks of "TV people." One night, during a hideously frightening diversion involving an unpleasant-looking tree, something steals the little girl for itself.
The battle is joined. But, as is the style of this beguiling film, the story continues to unfold with a wit and humour hitherto unseen in screen screamers. A team of parapsychologists from the local university are asked in to help.
Unlike Stanley Kubrick's dilettantish 1980 feature The Shining or Stuart Rosenberg's  overdone Amityville Horror (1979), Poltergeist maintains a strict internal logic. Speilberg's story plays fair with us at all times. We are told, in context, everything we need to know.
Occult researcher Dr. Lesh (Beatrice Straight) explains the difference between infestations of poltergeists and true hauntings. A professional medium named Tangina (Zelda Rubinstein) combines mystic beliefs with practical spook-wrangling skills. And, as it turns out, old-fashioned mother love has an important part to play in the proceedings.
Poltergeist is no slash-and-stab shocker. The object here is to disquiet and frighten, not nauseate its audience. Speilberg knows enough to offer us a plot, rather than a body count.
Don't mistake non-violent for non-scary, though. The night after seeing Poltergeist I had one of the worst nightmares of my adult life. Spielberg knows what scares us.
A film in which small children are seriously endangered throughout, Poltergeist looks and sounds just super in 70mm and stereophonic sound.

Afterword: Tobe Hooper, Poltergeist's director of record, was not happy about the controversy surrounding writer-producer Steven Spielberg's hands-on participation in what turned out to be a hugely successful motion picture. His next movie, the science-fiction shocker Lifeforce (1985) was undeniably "a Tobe Hooper film," a picture that my review described as "Star Trek for grown-ups". Poltergeist, meanwhile, generated two sequels — Poltergeist II: The Other Side (1986), directed by Brian Gibson, and Poltergeist III (1988), directed by Gary Sherman — and a four-season television series, Poltergeist: The Legacy (1996-1999) that was shot in and around Vancouver.
The movie community is filled with superstitious folk, as anthropologist Hortense Powdermaker pointed out in her groundbreaking 1950 field study, Hollywood, the Dream Factory. No surprise then, that the tragic deaths of four cast members between the releases of the first and third films are attributed to what some call the "Poltergeist curse." Dominique Dunne, the 22-year-old actress who played eldest daughter Dana Freeling, was attacked by an abusive former boyfriend and died on November 4, 1982, just five months after the first picture's release. Heather O'Rourke, who starred as Carol Anne in all three pictures, died on February 1, 1988, during emergency surgery brought about by complications from an earlier misdiagnosis of her illness. She'd just turned 12, and her death occurred four months before Poltegeist III's release. The list also includes two members of the Poltergeist II cast: Julian Beck, 60, who played villain Henry Kane, died of stomach cancer on September 4, 1985, eight months before the film's May 1986 release; Will Sampson, 53, who played its Native American hero Taylor, died of post-operative kidney failure on June 3, 1987, 11 days after its release.