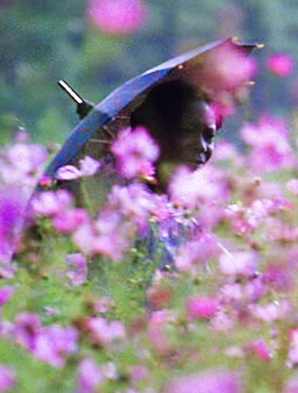 Celie Johnson (Whoopi Goldberg) escapes into a field where she can enjoy the restorative power of purple in director Steven Spielberg's 1985 feature The Color Purple.

Happiness has a hue


Today (March 26) is Purple Day, the name for the day set aside to raise awareness of epilepsy. First held in Halifax in 2008, it is now marked around the world, supported by political leaders such as Canada's Prime Minister Justin Trudeau, and celebrities such as Harrison Ford, the father of an epileptic daughter. Its founder was Cassidy Megan, a nine-year-old Haligonian who had been diagnosed with the neurological condition a year earlier. The first Purple Day included a presentation to her elementary school class by Nova Scotia's Epilepsy Association. The colour choice was based on Megan's own preferred name for lavender, a hue already associated with the condition. Significantly, purple also symbolizes solitude, a feeling with which epileptics are all too familiar. In 2009, the Canadian schoolgirl's initiative went international. The New York-based Anita Kaufmann Foundation took up the cause and helped build it into a global event. Now 17, Cassidy Megan continues to be involved. This year's Purple Day coincides with the Christian observance of Holy Saturday, which includes Easter Vigil services during which Roman Catholic priests wear purple vestments. In the movies, the sombre hue was special to Celie Harris Johnson, the abused black woman played by Whoopi Goldberg in director Steven Spielberg's 1985 drama The Color Purple.

Wednesday, December, 18, 1985.
THE COLOR PURPLE. Written by Menno Meyjes. Based on the 1982 novel by Alice Walker. Music by Quincy Jones. Co-produced and directed by Steven Spielberg.  Running time: 154 minutes.Mature entertainment with the B.C. Classifier's warning: some suggestive scenes and coarse language. "DEAR GOD,'' PRAYS POOR, abused sharecropper's daughter Celie Harris (Desreta Jackson). "I'm 14 years old. I always been a good girl.''
God knows, it's not been easy for Celie. When we meet her, she is heavy with child, her second by the man she calls "Pa'' (Leonard Jackson).
Handed over to neighbouring widower Albert Johnson (Danny Glover), she lives in virtual slavery on his Georgia farm, desperate and degraded. Only her faith, goodness and a love for The Color Purple sustain her through her Job-like trials.
Steven Spielberg is getting serious. The director responsible for such boxoffice blockbusters as Jaws (1975), Raiders of the Lost Ark (1981) and E.T. (1982), he has abandoned suburbia, high adventure and special effects sequences in favour of an intense inner drama set in a rural Southern backwater.
Over the years, filmgoers have wondered what would happen when this superb motion-picture craftsman turned his attention to heavier screen fare. Unfortunately, as his episodic, 154-minute adaptation of Alice Walker's Pulitzer Prize-winning novel crawls along, it's painfully obvious that Spielberg's reach has exceeded his artistic grasp.
"You're black! You're poor! You're ugly! You're a woman!'' an enraged Johnson bellows at the adult Celie (Whoopi Goldberg) during their major confrontation scene. Johnson's outburst, prompted by Celie's decision to to leave him, reminded me of a moment during The National Lampoon's Lemmings, a 1973 stage comedy spoofing the Woodstock rock music festival.
Between acts, a member of the radical Weather Underground appears on stage to harangue the audience. "We owe it to the Third World to off ourselves,'' he screams. "If you're not a black, homosexual, working-class woman, you're an oppressor, PIG!"
Celie is leaving Johnson to live with Shug Avery (Margaret Avery), Johnson's flamboyant, blues-singing former mistress, a woman with whom Celie shares a gently physical love.
Bingo! I thought. Spielberg manages a tick in every box.
Sadly, in doing so he fails to strike anything like an authentic note. In his attempt to demonstrate solidarity with oppressed persons, he comes across like a counterfeit Martin Ritt.
Throughout his career as a stage and screen director, Ritt, now 72, has been a social activist. A blacklist victim and an outspoken liberal,  in his recent films he promotes such worthy ideas as racial tolerance (Sounder; 1972), educational equality (Conrack; 1974) and trade unionism (Norma Rae; 1979).
The Color Purple, like Sounder, purports to reflect something of the black experience in America. It follows Celie through nearly three decades of slow growth and laborious consciousness-raising, gradually expanding its focus to include various other members of the Johnson family.
As in a Ritt vehicle, Spielberg's picture offers slick production values, postcard-pretty pictures and sincere sympathy for those who suffer injustice with saintly stoicism. A ''little movie, '' it cost Amblin Entertainment a mere $15 million to recreate the look of Southern rural poverty in the early 20th century.
Despite its calculated good intentions  — or possibly because of them — it fails to touch the heart. Neither Spielberg nor his Dutch-born screenwriter Menno Meyjes display any real feeling for Celie and her world.
As a result, their film is well-intended rather than insightful. Overlong and not particularly involving, The Color Purple is less an example of good movie making than of cinematic good works.

Afterword: Four weeks ago (February 28), the tension was palpable as the the U.S. Academy Awards broadcast went to air. Although the show's host was a black comedian, Chris Rock, the lack of black nominees was striking. Some prominent members of the performing arts community were mad as hell, and said so in no uncertain terms. A boycott was undertaken and the hashtag OscarsSoWhite was trending. What, if anything, will come of the 2016 controversy has yet to be determined. What we do know is that examples of the Academy's casual racism abound. Consider the evening of March 24, 1986. The major contenders, with 11 nominations each, were director Steven Spielberg's The Color Purple and Sydney Pollack's Out of Africa. When the curtain fell, Pollack had won the best picture and direction Oscars, and his lush tale of white romance in colonial Africa picked up an additional five awards. Spielberg's picture was shut out, despite being precisely the sort of film the Academy usually loves to love.
The team responsible for The Color Purple could take some satisfaction from the fact that it won at the box office, earning an estimated $142 million to Out of Africa's $128.5 million. It also introduced audiences to two women in their feature film debuts, both of whom have become powerful celebrities — best actress nominee Whoopi Goldberg and supporting actress nominee Oprah Winfrey.
Prior to his 2015 feature Bridge of Spies, only one of director Steven Spielberg's 27 theatrical motion pictures was not scored by John Williams. The exception was The Color Purple. The 1985 picture was composer Quincy Jones's debut as a movie producer, and Jones was involved with the project before Spielberg came on board. In the 1990 documentary Listen Up: The Lives of Quincy Jones, Spielberg tells an interviewer, "I thought a black director really should be doing The Color Purple . . . Quincy said to me, "Did you have to go to outer space and hire a superior intelligence to direct a movie about an alien?" Spielberg accepted Jones's logic and took the job of making the movie.