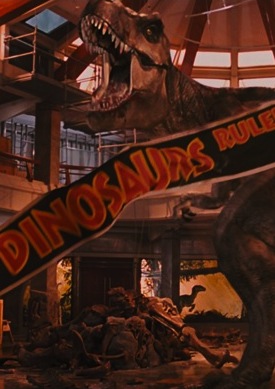 
Devolving back to the future of fantasy


Last week, Governor Jack Markell issued a proclamation declaring today (February 12) "Charles Darwin Day in the State of Delaware." Falling on the 207th anniversary of his birth, the observance grants state sanction to a celebration held annually since 2009. Gaining recognition for the discoverer of natural selection is the goal of a California-based International Darwin Day Foundation. Its first successes were in 2013, with civic Darwin Day proclamations adopted in Regina, Saskatchewan, San Diego, California, and Vancouver, B.C. Promoted as "a global celebration of science and humanity," its partisans include skeptics, secular humanists and other high-IQ types. Darwin, whose ideas have long been an inspiration for science fiction screenwriters, has only recently become a film character. After playing the Darwin-like Dr. Stephen Maturin in the 2003 historical adventure Master and Commander: The Far Side of the World, actor Paul Bettany played the man himself in 2009's Creation. Director Jon Amiel's fictionalized biography focused on his family life during the writing of On the Origin of Species, the book that gave birth to evolutionary science. In 2009, cineastes in London celebrated the 150th anniversary of its publication with a three-day Darwin, Evolution and the Movies festival. Its program emphasized apes (as in Planet of . . .) to the exclusion of such Darwin-inspired flights of biological fantasy as director Stephen Spielberg's 1993 adaptation of Michael Crichton's Jurassic Park

Friday, June 11, 1993.
JURASSIC PARK. Co-written by Michael Crichton and David Koepp. Based on the 1990 novel by Michael Crichton. Music by John Williams. Directed by Steven Spielberg. Running time: 127 minutes. 14 Years Limited Admission with the B.C. Classifier's warning: some violence and occasional coarse language. LEAPIN' LIZARDS!
It's the movie that Hobbes's hyperactive buddy Calvin has been waiting for all his life. With six different life-sized dinosaur species at large on the landscape, Jurassic Park is that beastly tyke's idea of pre-hysteric entertainment.
It's the movie that everybody has heard about. With 1,000 points of marketing, Steven Spielberg's screen adaptation of the Michael Crichton best-seller has been pre-hyped as the T. Rex of summer films.
It's okay. Still coasting on the mega-success of his pre-Twilight Zone: The Movie  features, Spielberg returns to pulp-thriller mode to deliver a high-tech creature feature.
It ain't great. Though he's still a master of toy movie-making, Spielberg has lost contact with the inner wonder that made his E.T. a unique film experience. Though his competence is never in question, the magic is gone.
In its place is an expensive variation on 1966's The Navy Vs the Night Monsters, remembered as the archetypal example of low-budget shock plotting. A small group of humans are trapped together on an island overrun with people-eating things . . .
On this round, the original story is credited to Crichton, a novelist who made his own directorial debut 20 years ago with Westworld, the story of a computerized theme park in which the robot performers malfunction murderously.
In his Jurassic Park, Crichton imagined a computerized theme park filled with resurrected dinosaurs. Spielberg's film opens with park planners experiencing technical difficulties.
When a salaried worker gets chomped by a hungry exhibit, anxious investors in the multimillion-dollar project demand reassurance that the place is user-friendly. Developer John Hammond (Richard Attenborough) calls in renowned paleontologist Alan Grant (Sam Neill), paleobotanist Ellie Sattler (Laura Dern) and mathematician Ian Malcolm (Jeff Goldblum) to vet the place
From the very beginning, it's clear that Spielberg is after another Jaws, not an E.T. He still knows how to build tension better than most of his shock film contemporaries, and he retains his fine talent for putting across somewhat ponderous plot points.
Here, though, he's lumbered himself with a by-the-numbers screenplay littered with holes large enough to drive a herd of galloping gallimimi through. It's to the director's credit that his pacing stays a step ahead of the logic lapses until the end credits.
It's then that you realize that all the blather about what man was or was not meant to know is just that. The supposedly serious issue of genetic engineering — "What you call discovery, I call the rape of the natural world," says an unexpectedly moral Dr. Malcolm — is just so much set decoration.
More important to the storyteller is whether or not Hammond's lizard-cute grandchildren (Joseph Mazzello and Ariana Richards) will win over child-hating Dr.Grant. The Calvins in the audience will spend their time guessing how many members of the cast will be gobbled up by the special effects.
The summer's designated heavy hitter, Jurassic Park is expected to wolf down all the available box office bucks. A disappointingly ordinary fantasy, its loose-ended conclusion suggests that Jaws-like sequels are being planned well into the 21st century.
For me, that's scarier than anything in the movie.

Afterword: It's a well-established Hollywood truism that successful summer films breed sequels, to say nothing of comic books, action figures, video games, and rides in the Universal Studios theme parks. Like Steven Spielberg's breakthrough feature Jaws, Jurassic Park was engineered to become a franchise. In 1997, actors Jeff Goldblum and Richard Attenborough returned for The Lost World: Jurassic Park, while Sam Neill and Laura Dern were back on board for Jurassic Park III (2001). A new story arc, featuring Chris Pratt and Bryce Dallas Howard, was introduced in 2015's Jurassic Park World. Both actors have signed on for two as yet untitled sequels, the first of them scheduled for release in 2018.

See also: Filmmakers love large lizards. Since animator Winsor McCay introduced audiences to Gertie the Dinosaur in 1914, prehistoric beasts have been featured in more than 175 movies. Among those included in the Reeling Back archive are:
*    King Kong — In the original 1933 feature, Skull Island's monarch shares his realm with some swamp-dwelling brontosauri.
*    Fantasia — Disney's 1940 cartoon classic features a T. Rex battling a Stegosaurus. Their prehistoric encounter is accompanied by the most modern of the concert film's musical  selections, Igor Stravinsky's 1913 The Rite of Spring.
*    Caveman  — Ringo Starr's character narrowly escapes being a hungry dinosaur's lunch in this 1981 comedy.
*    Godzilla 1985  — Japan's favourite marine reptile returns to the spotlight in Toho Studios' attempt to reboot its film franchise