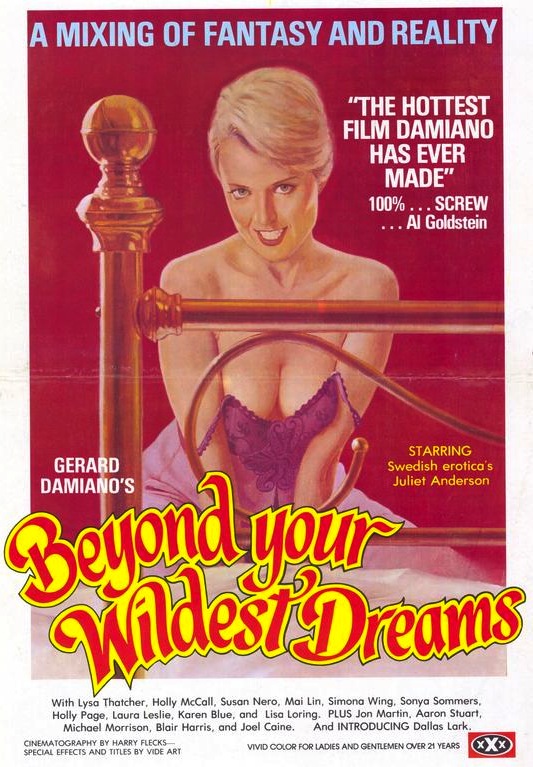 
Assessing his social impact is easy. The obituaries, published following filmmaker Gerard Damiano's death in 2008, almost all begin with the story of his most famous feature, the 1972 sex comedy Deep Throat. Critic William Wolf devoted a chapter of his 1979 book Landmark Films to the picture, noting that its "significance . . . reaches far beyond the porno genre." His impact on the film industry was seismic. What remains difficult, if not impossible, is making any real assessment of his artistic merit. Unlike works of a Bergman, an Altman or even a Corman, Damiano's fifty-plus feature films are not championed by scholars, or assembled for Cinematheque-style retrospectives. Born on this day (August 4) in 1928, Gerard Damiano deserves to be remembered as an auteur. An Italian Catholic from the Bronx, he channeled his ambition to become a filmmaker into the most marginal of movie genres and, with a film he wrote, produced, directed and edited, seized upon a countercultural moment in America to change it forever. As is so often the case, those who create change have no control over it thereafter. Despite his own artistic vision, Damiano became neither rich nor particularly famous. He practiced his craft for 24 years, taking every project as an opportunity to try new things. In his 24th feature, 1981's Beyond Your Wildest Dreams, he paid homage to Ingmar Bergman.

Afterword: Sex in the cinema was a serious issue for critics from the mid-1960s until the mid-1980s. In 1981, for example, police in Edmonton, Alberta, seized director Giovanni Tinto Brass's Caligula, bringing charges against the local exhibitor, Towne Cinemas, for showing an obscene film. As the film had already played Vancouver, I was called upon to offer "expert witness" testimony for the defence. (The defence prevailed, and Albertans were able to see what remained of the picture after its pre-release visit to the Alberta censor's editing room.) During my first decade as a daily newspaper film critic, I made four court appearances where my "expertise" on contemporary community standards was cited by the defence and questioned by the prosecutor. In each case, the fundamental issue seemed to be who should control what the public could see or hear in an entertainment venue. Each court victory diminished the power of government censors, and added to the choices available to the individual (among which was the choice to say "no thank you"). Throughout, it was my job to keep up on the issue both in my immediate neighbourhood and the entertainment business as a whole. And, I have to admit, I was one of those "observers" mentioned in the above review who expected a talented film-maker to emerge within the porno genre, transcend its limitations, and produce a genuine movie masterpiece. For various social, economic and technological reasons, that has yet to happen. The history is complex, with many possible explanations. Among the best is the one offered by Oregon State University professor Joe Lewis in his book Hollywood v. Hard Core: How the Struggle Over Censorship Saved the Modern Film Industry (New York University Press; 2000).

See also: Pornography is considered both as a genre and and an issue in my reviews of Insatiable (1980) and Up 'n' Coming (1983), as well as in my two interviews with actress Marilyn Chambers in 1980 and 1983. Earlier consideration of the issue can be found in my reviews of the 1976 Alice in Wonderland and The First Nudie Musical (1976). A documentarist's view is examined in Not a Love Story: A Film About Pornography (1981). The issue of sex in the cinema in the mid-1950s was the subject of The Notorious Bettie Page (2005).