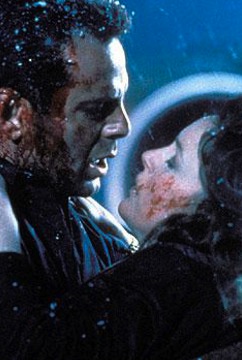 Home for the holidays


Ultraviolence with a moral compass


According to the daysoftheyear.com website, today (December 24) is Egg Nog Day. Though no origin is given for this celebration, Reeling Back has traced its roots to the infamous Christmas Eve Eggnog Riot that rocked the West Point Military Academy in 1826. Cadets, protesting an order that their seasonal libations be alcohol-free, went on a whiskey-fuelled rampage that resulted in 20 courts-martial. It appears a U.S. war on the seasonal spirits is nothing new. On this day in 1800, France's First Consul survived a Breton plot to kill him in Paris. For Napoléon Bonaparte, it was truly a Joyeux Noël. Then there was the Pulaski, Tennessee meeting of Confederate army veterans on December 24, 1865. Obviously dreaming of a white Christmas, they founded a group called the Ku Klux Klan. In London in 1866, delegates from the British North American colonies gathered to discuss political union. They agreed that their new nation would be called Canada. Seasons Greetings, eh! Signing on from Brant Rock, Massachusetts, on this day in 1906, Canadian inventor Reginald Fessenden presented the world's first audio radio broadcast, a show that included seasonal music. Yes, Fessenden inaugurated the tradition of Yuletide holiday specials. No surprise, then, that tonight Vancouver's Rio Theatre is screening everybody's favourite Christmas family feature, 1988's Die Hard. Two years later, the McClanes got together again to celebrate the season in director Renny Harlin's Die Hard 2 (1990).

Wednesday, July 4, 1990.
DIE HARD 2. Written by Steven E. de Souza and Doug Richardson. Based on characters created by Roderick Thorpe and the 1987 novel 58 Minutes by Walter Wager. Music by Michael Kamen and Jean Sibelius. Directed by Renny Harlin. Running time: 122 minutes. Restricted entertainment with the B.C. Classifier's warning: frequent violence and very coarse language. JACK'S BACK.
"Oh, man!" complains Los Angeles Police Lieutenant John McClane (Bruce Willis) to the steam pipes and utility cables deep beneath Washington's Dulles Airport.
"I can't believe this! Another elevator, another basement! How can the same shit happen to the same guy twice?"
Jack's attack of deja vu recalls a similar moment in 1988's midsummer action epic Die Hard. Jack's back because his screen debut was both a critical and popular success, a combination that results in megahits.
Oh, man! I hear you complain. Enough with the suspense. What about Die Hard 2?
Jack's back in the year's best adventure thriller. A sequel every bit as good as the original, Die Hard 2 comes on like gangbusters, adding James Bond technology and a touch of timely political paranoia to the expected humour and heroics.
It's Christmas again. Reconciled with his wife Holly (Bonnie Bedelia), John McClane is looking forward to spending a family holiday at her parents' home in Washington, D.C.
He's at Dulles to meet her flight when he senses something amiss. A good cop, McClane attempts to alert airport security.
Unfortunately, Jack's a victim of his own celebrity. Ever since the Nakatomi Plaza incident, a lot of other cops resent him.
Sensing that he'll get no help from the terminal patrolmen, he swings into action on his own.
A man with a talent for being "the wrong guy in the wrong place at the wrong time," McClane is the unexpected complication in a plot hatched by a renegade special forces colonel named Stuart (William Sadler).
Together with a contingent of crack troops loyal to his personal anti-communist crusade, Stuart is mounting an operation to free deposed Latin American dictator Ramon Esperanza (Franco Nero). A Noriega-like character, General Esperanza is being extradited to the U.S. to face drug charges.
In a spectacular bit of high-tech brigandage, Stuart plans to take charge of the air traffic control system and hold all incoming flights to ransom.
Smartly paced and chillingly believable, Die Hard 2 has lots of bad guys. It also has its own solid moral compass, something missing from this summer's other ultraviolent entertainments.
According to political philosopher Edward Burke, "the only thing necessary for the triumph of evil is for good men to do nothing." Since good men are hard to find in such style-over-substance features as Total Recall, Another 48 HRS., RoboCop 2 and Dick Tracy, those pictures remain uninvolving exercises in meaningless mayhem.
John McClane, by contrast, is a good man. A devoted husband and a dedicated cop, he is obliged by his values to take action.
As played by the likeable Willis, Jack may be a little short on social graces but he's no murderous cypher. He hurts and he whines, he bleeds and he bitches but he carries on because, dammit, someone has to do the right thing.
No, McClane doesn't make speeches or quote Burke to explain himself. The film works because his humanity is implied in his actions as set out in the screenplay by Steven E. de Souza and Doug Richardson.
Faced with a crisis, the designated authorities — a group that includes the airport security chief (Dennis Franz), the tower boss (Fred Dalton Thompson) and the army's anti-terrorist expert (John Amos) — all shunt McClane aside.
As befits a pop thriller, our hero gets his help from "ordinary" people: an elderly janitor (Tom Bower), an electronics engineer (Art Evans) and a female TV reporter (Sheila McCarthy).
The sort of crowd-pleasing film that makes instant reputations — director John MacTiernan went on from his success with Die Hard to direct this year's [1990] The Hunt for Red October — Die Hard 2 is a directorial triumph for the previously unknown Renny Harlin.
Until now, the Finnish-born filmmaker's best-known picture was 1988's A Nightmare on Elm Street 4: The Dream Master. One week from today [July 11, 1990], filmgoers get to assess his Andrew Dice Clay feature, The Adventures of Ford Fairlane.
Can he score two hits in a row? If Die Hard 2 is any indication, Harlin is one director we'll be glad to welcome back.

Afterword: As it turned out, Renny Harlin did not score two in a row. An attempt to make a star out of repellant shock comedian Andrew Dice Clay, The Adventures of Ford Fairlane tanked big time. Harlin's career survived because Die Hard 2 was a major hit, an achievement that made him "the most successful Finnish film director in the history of Hollywood," in the words of his IMDb mini-biography. Considering his subsequent career, his most impressive accomplishment seems to have been his five-year (1993-1998) marriage to actress Geena Davis. During that time, they set up their own production company and he directed her in two features, the 1995 pirate adventure Cutthroat Island and the 1996 superheroine epic The Long Kiss Goodnight. Neither was a box office success.
The Die Hard franchise fared better. Although subsequent editions would not qualify as Christmas pictures, John McClane continued to be driven by family issues. He is separated from Holly in 1995's Die Hard with a Vengeance. He reconnects with his estranged, now adult daughter Lucy in 2007's Live Free or Die Hard  and reconciles with his adult son John in 2013's A Good Day to Die Hard. Overall, the five films are reported to have grossed nearly $1.5 billion.

See also: Before her marriage to Renny Harlin, Geena Davis made an increasingly positive impact in such features as BeetleJuice (1988), Earth Girls Are Easy (1988), A League of Their Own (1992) and Hero