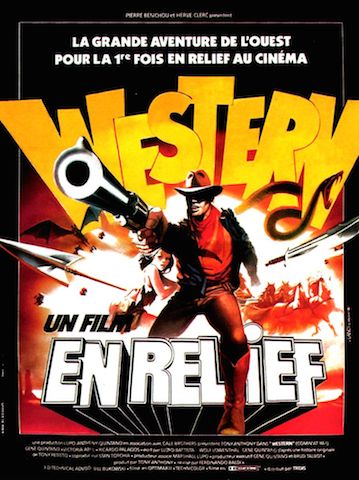 Cutting to the chase, the French-language poster for Ferdinando Baldi’s 1981 feature Comin’ At Ya! called it WESTERN and noted that it was “En Relief” (3-D).


The ads promised ”A LION in your lap! A LOVER in your arms!" On this day (February 18) in 1953, Bwana Devil, the first feature film shot in colour using the two-projector Polaroid 3-D system, premiered in New York at the Loew's State Theater. An independent feature made in Africa, its popular success attracted the attention of Hollywood studios desperate for some new thing to use in their fight with the newest media sensation, television — and an entertainment craze was born. Before the market for 3-D crashed in 1955, some 65 features (and countless pairs of cardboard glasses) passed through North American cinemas. A second boomlet occurred in the early 1980s, following the development of a single-projector 3-D process. Though this resurgence ended in 1986, 3-D would continue as an attraction in the giant-screen specialty venues operated by the Canadian-based IMAX Corporation. The emergence of digital technology in 2002 set the stage for 3-D’s third coming. When 2009's Avatar became the top-grossing film of all time, a new generation of panic-stricken studio executives decided that 3-D was the answer to their 21st-century woes. Or not. The new boom peaked in 2011 with 47 3-D features released. The numbers have dropped each year since, with just 12 announced for 2020. Today, Reeling Back recalls four titles from that 1980s mini-boom(with links to each following the Afterword to this posting), including the movie that set it off, director Ferdinando Baldi’s 1981 spaghetti western Comin’ At Ya!.

COMIN’ AT YA! Written by Wolf Lowenthal, Lloyd Battista, and Gene Quintano, based on an original story by Tony Anthony. Music by Carlo Savini. Directed by Ferdinando Baldi. Running time: 91 minutes. Restricted with the B.C. Classifier’s warning: "frequent brutal violence, occasional nudity.” RIGHT NOW YOU’RE PROBABLY asking yourself, "what ever became of Tony Anthony?" Currently on view in a shoot’em-up called Comin’ At Ya!, old Tony hasn’t been in touch for ages.
A Clarksburg, West Virginia boy, Anthony hoped to make it in the movies. Before following Clint Eastwood to Italy, he was involved in the making of such forgotten films as Pity Me Not (1960) and Force of Impulse (1961).
Eastwood, as everyone knows, graduated from Sergio Leone’s spaghetti westerns (For a Fistful of Dollars, etc.) to Don Siegel’s urban thrillers (Coogan’s Bluff,  Dirty Harry, etc.). A millionaire superstar today, Eastwood is a name actor and an occasional director.
Anthony, by contrast, is one of the generation’s more interesting non-success stories. Film historians like Laurence Staig (Italian Westerns; London, 1975) and Christopher Frayling (Spaghetti Westerns; London, 1961) accord his career little more than footnote status, despite the fact that he once starred in his own series, playing a no-name character known as "the stranger.”
Poor ignored Tony. He was an expatriate American actor who failed  to ride the phenomenon anywhere at all. His "masterpiece,” 1971’s Blindman, was the story of a sightless gunman with a seeing-eye horse. (The film played here in October 1972, and co-starred Beatles drummer Ringo Starr as a Mexican. But that’s another story.)
Demonstrating his versatility, Anthony conceived, produced, co-wrote and starred in Blindman. He played a dauntless fellow who contracts to deliver 50 mail-order brides to some Texas miners. He loses his precious cargo to bandits, who plan to sell the young women to a corrupt Mexican general for use as regimental whores.
Despite his disability, Blindman pursues the miscreants.  Asked at one point why he persists, he says "to have no eyes, that's to be half a man. To have no eyes and no money, now that’s a bitch!"
In 1978, Anthony got together with Blindman director Ferdinando  Baldi to produce a picture called H.H. Hart and the Cajun Queen. They announced that they were working with "22 visual effects technicians  . . . 22 assorted girls from France" and a new, computerized 3-D system.
Last year, the Los Angeles-based Filmways Corporation made a deal to distribute producer Anthony's shot-in-Spain 3-D duster. Re-edited by the distributor, it premiered at the 1981 Show-A-Rama exhibitors convention in Kansas City as Comin’ At Ya! (Filmways, for those of you keeping score, is the corporate successor to the now defunct American International Pictures. But that's another story.)
On screen, the time is 1876. The Thompson brothers are a pair of badhats who affect U.S. Civil War officer’s uniforms. Polk (Ricardo Palacios), the fat, mean one, wears Confederate grey, while Pike (Gene Quintano, who also wrote the screenplay), the slim mean one, dresses in Union blue.
Like the rapscallions in Blindman, they’re white slavers. The film opens with them snatching a comely lass named Abilene (Victoria Abril) from the church where she has come to marry Hart (Anthony). Despite multiple gunshot wounds, Hart lives to swear revenge.
As the story unfolds, it becomes apparent that neither intelligence nor virtue count for much in this world. As written, Hart is no brighter than the Thompsons. His survival has more to do with the filmmaker’s need to fill time than with any story-telling logic.
A word of warning: Comin’ At Ya! contains little by way of plot, characterization, wit or coherent meaning. Its screenwriters, Anthony and Quintano, obviously wore themselves out just thinking up ways to exploit the Optimax III depth-vision technology.
Expect an unending variety of things to be thrown at the camera. Rubber bats, dyed rats, spears, arrows, reaching hands, a baby’s bottom, beans, bullets and burning straw are among the items used to assault the audience.
Assessing the quality of the 3-D picture is difficult. Filmways appear to have supplied Famous Players theatres with a defective print. Throughout, it seemed to me, the left eye component of the picture was dark and blurry, while the right eye’s picture was sharp and bright.
Assessing overall quality is easier. Tony Anthony’s latest offering displays none at all.
*    *    *
No,  Comin’ At Ya! with all its shortcomings is not the end of the current 3-D revival. The E.O. Corporation is at this very moment offering exhibitors a movie called Rottweiler, billed as the "first 3-D production in (the United States) since 1953.”
E.O. stands for producer Earl Owensby, who co-stars in the film with “10 of the deadliest dogs in the world.” A successful independent moviemaker, Owensby operates out of his own studios on 112 acres of land just outside of Shelby, North Carolina.  But that is definitely another story.

Afterword: Earl Owensby was “definitely another story,” one that I never got around to telling at the time. An entrepreneurial son of the south, he was an independent filmmaker who built his own production company in the Tar Heel State. Called a “Backwoods Movie Mogul,” in a 1985 Chicago Tribune headline, he was also known as “the Dixie DeMille” and “the Redneck Roger Corman.” The latter characterization probably came closest to the truth — Owensby movies were basically grindhouse fodder — though none of the 41 features produced at his studio during its three decades in business was as memorable as a Corman picture. Worth remembering, though, is the man’s genuine enthusiasm for stereoscopic cinema. In the wake of Comin’ At Ya!’s success, he took up the cause of 3-D, producing six features in the process in just three years.
It began with the 1982 canine attack thriller Dogs of Hell (announced as Rottweiler), and continued with a Smokey and the Bandit-like comedy, 1983’s Hit the Road Running, and the prison-break drama Chain Gang (1984). Owensby, who was also an actor, had the starring role in all three pictures. He was not on view in the romantic comedy Hot Heir (aka The Great Balloon Chase), the Star Wars-inspired Hyperspace (aka Gremloids) or the horror anthology Tales of the Third Dimension (all released in 1984). Apparently Owensby worked with competent technicians and, though his pictures were not widely distributed — a problem shared by all regional filmmakers — those who did see his 3-D pictures were impressed by their look.