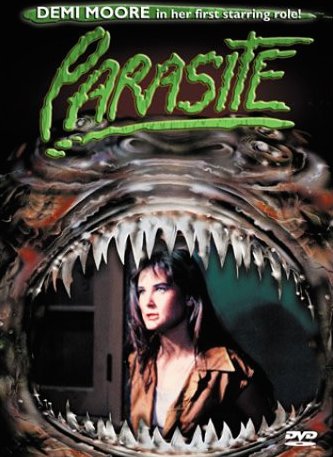 At the time of its 1999 release as a DVD, the major selling point for director Charles Band’s 1982 feature Parasite was not 3-D, but “Demi Moore in her first starring role.”


The ads promised ”A LION in your lap! A LOVER in your arms!" On this day (February 18) in 1953, Bwana Devil, the first feature film shot in colour using the two-projector Polaroid 3-D system, premiered in New York at the Loew's State Theater. An independent feature made in Africa, its popular success attracted the attention of Hollywood studios desperate for some new thing to use in their fight with the newest media sensation, television — and an entertainment craze was born. Before the market for 3-D crashed in 1955, some 65 features (and countless pairs of cardboard glasses) passed through North American cinemas. A second boomlet occurred in the early 1980s, following the development of a single-projector 3-D process. Though this resurgence ended in 1986, 3-D would continue as an attraction in the giant-screen specialty venues operated by the Canadian-based IMAX Corporation. The emergence of digital technology in 2002 set the stage for 3-D’s third coming. When 2009's Avatar became the top-grossing film of all time, a new generation of panic-stricken studio executives decided that 3-D was the answer to their 21st-century woes. Or not. The new boom peaked in 2011 with 47 3-D features released. The numbers have dropped each year since, with just 12 announced for 2020. Today, Reeling Back recalls four titles from that 1980s mini-boom(with links to each following the Afterword to this posting), including director Charles Band’s heavily promoted 1982 shock thriller Parasite.

PARASITE. Written by Alan J. Adler, Michael Shoob and Frank Levering. Music by Richard Band. Directed by Charles Band. Running time: 85 minutes. Rated Restricted with the B.C. Classifier’s warning: frequent gory violence. CHARLES BAND, THE 31-YEAR-OLD producer-director of Parasite, claims a number of historic firsts for his latest film. It is, he says, "the first new American-made 3-D movie to be shown in theatres since 1954.” It is also, he adds, "the first new full-story film to be shown in 3-D in almost 20 years”
The New York Times bought his story whole. Parasite, reported critic Janet Maslin uncritically, “is the first American-made monster film in 3-D.”
As the Creature from the Black Lagoon (whose second film appearance, Revenge of the Creature, was made and released in the U.S. in 3-D in 1955) rolls over in its watery grave, let's set the record straight. There have been more than a dozen full-story 3-D features released in the last 20 years, and I know of at least seven produced in the U.S. since 1954.
No 3-D buff, Band wasn’t even thinking about the depth vision process when the Parasite project began. An exploitation movie producer — his previous products include the X-rated Cinderella (1977) and a quickie sci-fier called Laserblast (1978) — Band was sold the idea by equipment wholesaler Chris Condon, founder of StereoVision International.
If Parasite has any real distinction, it is the large debt of gratitude Band owes to Canada’s David Cronenberg. His current picture is the first full-scale homage to the Toronto-based filmmaker’s work.
Consider Parasite’s plot. It is 1992, and a post-nuclear-holocaust America is controlled by an insidious industrial elite known as “the merchants.” Biologist Paul Dean (Robert Glaudini), distinguished author of The Pathology of Parasites,  has been working on a secret government project.
As the film opens, Dean is on the run. In a nightmare flashback, we see a laboratory accident in which an experimental critter chews through his flesh to take up residence in Dean’s abdomen.
Aware that the great Xyrex Corporation is up to no good, he escapes. With him, he carries a Thermos bottle containing a second little nasty. He’s determined to come up with a way to kill them both.
Recall writer-director Cronenberg’s features (among them 1977’s Rabid, 1981’s Scanners and 1979’s The Brood), and a number of common elements emerge. To date, the Canadian director’s films have been set in the immediate future and have involved doctors whose research goes disastrously awry.
The critter in Parasite bears more than a passing resemblance to things first seen in a 1975 Cronenberg film, a picture released in the U.S. as They Came from Within. Here, it was called Shivers, but Cronenberg had planned to market it as The Parasite Murders.
Band’s Dr. Dean goes into hiding in a remote desert community called Joshua, population 64 and dropping. Beset by renegade gangs, sickened by the thing growing in his gut and pursued by a laser-wielding corporate agent named Wolfe (James Davidson), he finds an unexpected ally in Patricia Welles (Demi Moore), a self-reliant country girl.
Despite an interesting premise, Band’s picture lacks conviction, both in the development of its ideas and its use of the 3-D technology. Unlike Cronenberg, who always pushes his concepts to nightmare extremes — his parasite became a venereal disease inducing suicidal sexual hysteria in its host humans — Band seems to have given little thought to either his characters or their situation.
Parasite looks as if Band started with the image of  his critter bursting Alien-like from a victim’s body, and built a storyline around it. After being sold on the idea of 3-D, he then modified his plot to accommodate some stereoscopic shocks.
Fans of the process will enjoy recoiling from a striking rattlesnake, spring-loaded parasite attacks and the occasional airborne stuntman. Unfortunately, the extra visual depth does nothing to involve us with the story’s characters, most of whom are introduced only to be assaulted, infected, disfigured or dismembered.

Afterword: Fake news, it turns out, is nothing new. Here I am in my 1982 review of Parasite, finding the fact that the self-proclaimed “newspaper of record” had swallowed a movie producer’s snake oil more shocking than the film itself. Janet Maslin served as the New York Times film critic from 1977 to 1999, which, quite coincidentally, was the year Parasite was first released on DVD. Some 17 years along, Charles Band was still serving ups “firsts.” According to the packaging, the movie’s selling point was “DEMI MOORE in her first starring role!” This time, the advertising line spoke the truth. By 1999, Moore was a Hollywood A-lister, having starred in such Oscar best picture nominees as 1990's Ghost and A Few Good Men (1992). Is Moore grateful to Band for giving her her first starring role?
Not really. Last October (2019), during her appearance on CBS-TV’s The Late Late Show, host James Corden asked Moore “what’s the worst movie you’ve ever been in?” Her instant answer — “It’s Parasite in 3-D” — got the expected laugh from the live audience, but seemed rather ungracious to me. Yes, the film had its problems, but its screenplay did give Moore’s character Patricia Welles an active part in the fight against the villain and his icky creation. It showcased her talent for independent woman roles, and made her breakthrough possible. Among the "worst" movies she might have btetter chosen are the utterly loathsome Blame It on Rio (1984), or the tediously incompetent We’re No Angels (1989). Not my favourite Hollywood star — I once described her as “a bargain-basement Margot Kidder” — Demi Moore continues to appear regularly on the covers of supermarket tabloids everywhere.