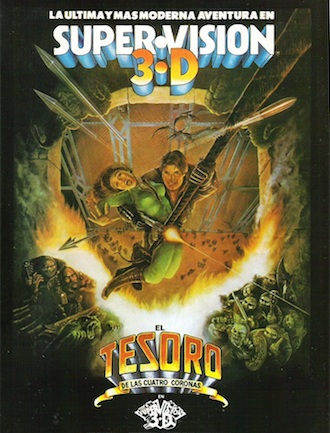 The variety of visual assaults on offer are emphasized in the Spanish poster for director Ferdinando Baldi’s 1983 3-D feature Treasure of the Four Crowns.


The ads promised ”A LION in your lap! A LOVER in your arms!" On this day (February 18) in 1953, Bwana Devil, the first feature film shot in colour using the two-projector Polaroid 3-D system, premiered in New York at the Loew's State Theater. An independent feature made in Africa, its popular success attracted the attention of Hollywood studios desperate for some new thing to use in their fight with the newest media sensation, television — and an entertainment craze was born. Before the market for 3-D crashed in 1955, some 65 features (and countless pairs of cardboard glasses) passed through North American cinemas. A second boomlet occurred in the early 1980s, following the development of a single-projector 3-D process. Though this resurgence ended in 1986, 3-D would continue as an attraction in the giant-screen specialty venues operated by the Canadian-based IMAX Corporation. The emergence of digital technology in 2002 set the stage for 3-D’s third coming. When 2009's Avatar became the top-grossing film of all time, a new generation of panic-stricken studio executives decided that 3-D was the answer to their 21st-century woes. Or not. The new boom peaked in 2011 with 47 3-D features released. The numbers have dropped each year since, with just 12 announced for 2020. Today, Reeling Back recalls four titles from that 1980s mini-boom (with links to each following the Afterword to this posting), including Italian director Ferdinando Baldi’s 1983 action adventure, Treasure of the Four Crowns.

TREASURE OF THE FOUR CROWNS. Written by Lloyd Battista, Jim Bryce and Jerry Lazarus, based on a story by Tony Petito [Tony Anthony] and Gene Quintano. Music by Ennio Morricone. Directed by Fernando Baldi. Running time: 99 minutes. Rated Mature with the B.C. Classifier’s warning: some frightening scenes. THEY'RE BACK. THE COMIN’ At Ya!  team is together again. Producer Tony Anthony and director Fernando Baldi rounded up buddies Gene Quintano and Lloyd Battista for another assault on the eyeballs of the nation.
This time, they've got the backing of Cannon Films, a company headed up by the tasteful team of Menahem Golan and Yoram Globus. If these names mean nothing to you, then, my friend, you are no connoisseur of search-and-destroy cinema, the fine art of exploitation filmmaking.
The rules: make 'em fast, make 'em cheap, make ’em pay. Most horror shows, urban action films, high school sex comedies and women-in-prison pictures fall into this category.
A minor spaghetti western star, Tony Anthony added 3-D to the formula in his bloody-minded 1981 western Comin’ at Ya! It made more money than it cost, so this year [1983] he's back with Treasure of the Four Crowns. Also filmed in 3-D, it's a witless Raiders of the Lost Ark  lookalike.
It opens with J.T. Striker (Anthony) enduring miscellaneous life-endangering trials in a medieval castle, and emerging with a bejeweled key. It concludes with Striker and his hand-picked Mission: Impossible-like team breaking into another castle to use the key to unlock the power hidden within a pair of ancient Visigothic crowns.
In between, we learn that the nominal good guy, Professor Montgomery (Francisco Villen), wants to wrest this power from the obvious bad guy, Brother Jonas (Emiliano Redondo), leader of a street-corner religious cult bent on world domination.
Striker’s team consists of Montgomery’s somewhat craven henchman Edmund (Gene Quintano), an alcoholic mountaineer named Rick (Jerry Lazarus), Socrates (Francisco Rabal), a former circus strongman with a heart condition, and Socrates’s aerialist daughter Liz (Ana Obregon).
Don't look for a lot of logic here. These guys make pictures that are long on shock effects but short on explanations. The team's cinematic philosophy is well summed up by a minor character who has been watching Socrates rehearsing his clown act. "Well, it stinks. But maybe it will work.”
Maybe. Audience attitude counts for a lot. Filmgoers willing to subject themselves to visual assault and battery — the use of the 3-D technique to drop, fling, toss, shoot, extrude, expel and inflict the illusion of injury upon us is relentless — will get a thorough working-over here.
The kind of endurance test that usually appeals to teenagers, Treasure of the Four Crowns should be approached with teeth gritted. In the moment before he grasps the power of the crowns, Striker gives us a demonstration of the correct attitude.
Snarling, our hero says "here I come, you magical son of a bitch.”
*    *    *
"This summer [1983], will see the largest outpouring of 3-D product since the heyday of stereoscopic films some 30 years ago.” According to the current issue of Boxoffice, the movie exhibitors magazine, "no less than 15 films will be released (in the U.S.).”
Locally, Canadian Odeon Theatres have booked Columbia’s Spacehunter: Adventures in the Forbidden Zone to follow Treasure of the Four Crowns. On July 20, Universal’s $15.9 million Jaws 3D arrives in town.
Famous Players is warming up audiences with a re-release of last year’s Friday the 13th Part III. Coming soon are Paramount's The Man Who Wasn't There and Amityville 3-D from Orion.
"3-D works,” says a separate Boxoffice article, “— if you do. A quality 3-D presentation requires more care than flat projection but the rewards are there.”
At this point, the exhibition chains are not taking enough care. Their 3-D glasses, the vital link between the audience and the image on the screen, are bottom-of-the-line junk.
If the chain theatre people could honestly tell us that their flimsy, ineptly designed cardboard glasses were the best available it would be like it or lump it. They can't say that, though.
Last year [1982], when he was regularly featuring 3-D movies in his Savoy Cinema, independent exhibitor Sean Daly supplied patrons with superbly fitting, plastic-framed polarized glasses made by a company called Stereo Vision Systems. The first time I saw Friday the 13th Part III, I took a pair of  Daly’s Stereo Vision glasses to Famous Players' Capitol 6 to make my own comparison test.
For me, the 3-D sensation works best when I don’t have to spend half my time fumbling with ill-fitting spectacles. I suspect this may be true for other people as well.
Why, then, are the national theatre chains diminishing their patrons’ pleasure by lumbering them with third-rate glasses? Why are the distributors, with their multi-million-dollar investments in production and advertising at stake, allowing theatres to shortchange their customers in this way?
There is an obvious answer. I hope it's not true, though, because it isn't very nice.

Afterword:  Exhibitors — the people who own and operate movie houses — are in the business of connecting audiences with their entertainment. In English Canada in 1983, that business was pretty much in the hands of two large foreign-owned theatre chains: Canadian Odeon Theatres and Famous Players. Theirs was a top-down, take-it-or-leave-it business model designed to maximize corporate profits. The few independent exhibitors that did exist were brave souls who worked hard to connect with their local communities. Sean Daly, who opened the 311-seat Savoy Theatre on Vancouver’s Main Street in May 1980, was one such soul. In an interview later that year, Daly described his aim to operate as “a total community theatre,” one that included an audience suggestion box.
When 3-D made something of a comeback in 1981, Daly was one of its most enthusiastic boosters. To make the the experience a memorable one, he went to the trouble (and expense) of installing a new Stereovision projection system, a silvered screen and, of course, he provided patrons with those Stereo Vision glasses that I mentioned in the above story. Along with such new releases as Comin’ at Ya!, Daly brought back such classic fare as director Alfred Hitchcock’s 1954 thriller Dial M for Murder, the 1953 Andre de Toth shocker House of Wax, and Alf Silliman Jr.’s 1969 softcore sex fantasy The Stewardesses. Demonstrating genuine initiative, “Vancouver’s only 3D cinema” sought out such previously unseen material as the 1977 Hong Kong kung fu feature Dynasty, given its Canadian premiere at the Savoy on August 10, 1981.
Interest in the 3-D film revival peaked around the time the above review appeared. A new entertainment option — home video — had entered the picture, and VHS cassette rental shops were opening in every neighbourhood. Independent movie houses were especially vulnerable, and in April, 1984, Daly made the switch to a new specialty: erotica. Twelve weeks later, Daly decided that he’d had enough, and the Savoy ended its four-year run as an alternative to the chain houses. A month later, it reopened under new  management as the Fox Cinema, an unapologetic porn house that would be a Main Street fixture for the next three decades.