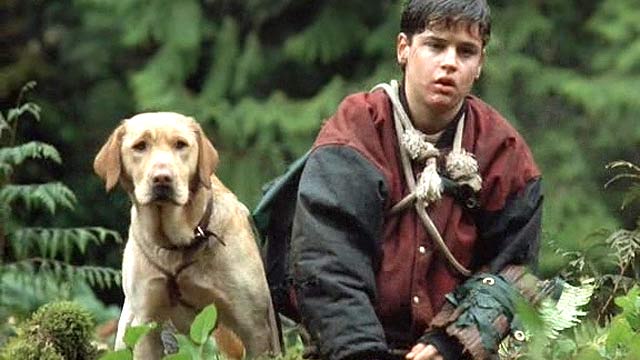 
In Part 17 of a 20-part series, Reeling Back continues The Greater Vancouver Book's Feature Film Festival, with restored notes on the seven features celebrating some of Man's Best Friends.

HUMAN ACTORS HAVEN'T a chance when they have to share the screen with Vancouver scenery and a scene-stealing animal actor. Locally filmed pictures in which pets play major roles include:

THE JOURNEY OF NATTY GANN (1985; d. Jeremy Kagan) with Meredith Salenger, John Cusack, Ray Wise, Jed. Vancouver is dressed to look like the Depression-era U.S. for this story of an abandoned girl (Salenger) who dresses as a boy to make a cross-country trek in search of her father (Wise). She makes her way west accompanied by a protective wolf (Jed). Lillooet, Sparwood and a lot of B.C. Railway right-of-way are on view in this period Disney feature seen both in theatres and on the Wonderful World of Color TV series.

WATCHERS (1988; d. Jon Hess; based on the 1987 novel Watchers by Dean Koontz) with Corey Haim, Michael Ironside, Barbara Williams, Sandy. A trusting teen (Haim) discovers that his new golden retriever (Sandy) is the friendly half of an escaped living-weapons system, and the killer half is at large in the woods. Universal Pictures released this sci-fi shocker that made use of locations in Lynn Canyon, on the Capilano River and Simon Fraser University as the sinister, futuristic government laboratory.

BINGO (1991; d. Matthew Robbins) with Cindy Williams, David Rasche, Robert J. Steinmiller, Jr., Lacey. Inept as a performer, a Colorado circus dog (Lacey) goes off in search of a family of his own. Adventures ensue involving him with the son (Steinmiller) of a professional football player (Rasche). Inspired by 1958's The Littlest Hobo feature and the subsequent B.C.-made TV series, this Tri-Star Pictures release includes the domed B.C. Place Stadium among its locations.

ANDRE (1994; d. George Miller; based on the 1975 novel A Seal Called Andre by Harry Goodridge and Lew Deitz) with Keith Carradine, Tina Majorino, Keith Szarabajka, Tory. Released into the wild, an orphan seal (Tory) returns to his nine-year old friend (Majorino), and his adopted human family, in that corner of West Vancouver that looks like coastal Maine. Australian director George Miller, who filmed 1990's The Neverending Story II in Gastown, shot interiors for this Paramount Pictures release in the Vancouver Aquarium and exteriors in scenic Deep Cove. Tory, who played Andre, was actually a performing sea lion from Valencia, California's Magic Mountain Aqua Theatre.

WHITE FANG 2: MYTH OF THE WHITE WOLF (1994; d. Ken Olin) with Scott Bairstow, Charmaine Craig, Al Harrington, Jed. An heroic husky (Jed) enables his human companion (Bairstow) to help a Haida village protect its caribou herds from a greedy Alaskan mining company circa 1900. Actor Ken Olin made his directorial debut with this sequel to Disney Pictures' White Fang (1991). He made use of such Vancouver wilderness locations as Whistler, Squamish and the Britannia Beach Mining Museum.

FAR FROM HOME: THE ADVENTURES OF YELLOW DOG (1995; w./d. Phil Borsos) with Jesse Bradford, Mimi Rogers, Bruce Davison, Dakotah. A brave dog (Dakotah) helps his teenaged best buddy (Bradford) survive three weeks in the Vancouver Island wilderness. It was shot near the Mayne Island home of director Phil Borsos, whose fine documentarist's eye turned the coastal forest into this outdoor drama's co-star. Terminally ill during its production, Borsos died at the age of 41, just 20 days after the film's release by 20th Century Fox.

The above is Part 17 of a 20-part restoration of a Greater Vancouver Book article by Michael Walsh originally published in 1997. For additional information on this archived material, please visit my FAQ.