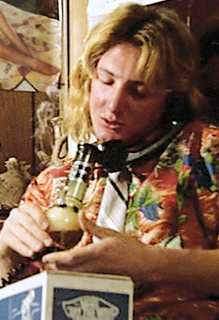 Teenaged stoner Jeff Spicoli (Sean Penn) discovers how difficult it is to talk and toke at the same time in director Amy Heckerling’s 1982 comedy Fast Times at Ridgemont High.

A slice of the high life


For one Vancouver TV station it was Breaking News!. In a moment of inattention recalling a 1980s teen movie, three suburban school districts scheduled a teachers' professional development day for today (April 20). According to the breathless TV news anchor, that meant that area teens would have no classes to keep them away from Vancouver’s 4/20 Festival, the annual celebration of cannabis culture that attracted some 35,000 pot advocates to Sunset Beach in 2017. Light on context, the news item did not mention that 4/20 has been observed in Vancouver since 1995, the year that an estimated 200 people gathered in downtown’s Victory Square to party and protest the failed war on drugs. Nor did it tell us that 4/20 events are held in cities across Canada and the United States. The item’s faux outrage seemed a little hollow, given that the same coincidence of a pro-d day and 4/20 occurred in 2012 without any dire consequences. Did I mention that Canada is legalizing cannabis in July? Today, Reeling Back adds four recreational drug-fuelled titles to its archive (with links to each following the Afterword to this posting). Despite two Oscar wins in serious dramas, actor Sean Penn is still remembered as the teen stoner in director Amy Heckerling’s 1982 high-school comedy Fast Times at Ridgemont High.

FAST TIMES AT RIDGEMONT HIGH. Written by Cameron Crowe, based on his 1981 book. Music by Joe Walsh, with musical editing by Jim Weidman. Directed by Amy Heckerling. Running time: 92 minutes. Restricted entertainment with the B.C. Classifier's warning: frequent very coarse language, some nudity and suggestive scenes. MOVIE PROMOTION IS AN exceedingly strange business. According to the Savoy Cinema's Sean Daly, Universal Studios told him that there were to be no preview screenings of its film Cattle Annie and Little Britches.
The picture, a Western filmed in 1979, was among the movies shelved during the panic that followed the spectacular failure of Michael Cimino’s Heaven's Gate. Despite the presence of Oscar winners Burt Lancaster and Rod Steiger in starring rales, Universal is doing everything it can to keep its existence a secret,
Universal seems less shy about Fast Times at Ridgemont High. Screened last Monday [1982], it is the sort of picture that makes me wonder what colour pills the distribution decision-makers are popping this week.
We’re supposed to believe that Fast Times is a prestige production. It's based on the work of an investigative reporter, just like 1976’s All the President’s Men.
It seems that rock journalist Cameron Crowe was curious about how things had changed since his own graduation. "In the fall of 1979,” his Universal biography tells us, Crowe returned to high school “undercover" as a student to research teenage life.
After lurking about a Los Angeles area secondary school for a semester, Crowe produced his book, then went on to adapt it for the movies. “Fast Times," he assures us, "is not a teen exploitation picture. It’s the way they live.”
Sure, Cam.  It's a slice of life In the tradition of those great 1979 Crown-International documentaries Coach, ("Every schoolboy's dream"), Van Nuys Blvd. ("The greatest cruisin' in the land . . .") and  Malibu High (“Every teacher in school wanted to FLUNK HER!).
Crowe's teens live in a world without adults. Parents are perpetually out of the room, out of the house, out of town and out of the picture. These kids drive cars and live in homes with swimming pools, but think they're deprivation cases because their neighbourhood lacks cable television.
Representing real life in this world are Jeff Spicoli (Sean Penn), a permanently spaced-out surfer, Mark Eatner (Brian Backer), a sincere wimp, Mark’s wheeler-dealer confidant Mike Damene (Robert Romanus) and Brad Hamilton (Judge Reinheld), assistant manager down at the All-American Burger franchise.
At the emotional centre of our little drama is Brad's 15-year-old sister Stacy (Jennifer Jason Leigh). She's cute as anything and aggressively determined to lose her virginal sexual status. Need I add that she succeeds?
Perhaps I'm just too skeptical. It may well be that real life among Californian teenagers really does resemble a middle-aged male's masturbatory fantasy.
Come to think of it, although Fast Times at Ridgemont High is billed as a comedy, I don't recall hearing anyone laugh during that preview screening.
Maybe it is a documentary.

Afterword: As it turned out, Fast Times at Ridgemont High was more significant than I thought. Released in 1982, shortly after America’s First Lady Nancy Reagan delivered her infamous “just say no” speech at an Oakland, California elementary school, it was the movie that told us that pot was a part of U.S. teen culture. In addition, it set the pattern for the 1980s wave of teen-ensemble films, while providing breakout roles for young actors Sean Penn, Jennifer Jason Leigh, Phoebe Cates and Judge Reinhold. All of them became stars in their own right, familiar faces in such quirky features as Racing with the Moon (1984), The Hudsucker Proxy (1994), Gremlins (1984) and Vice Versa (1988).
The movie inspired a single-season TV series, Fast Times (1986). Amy Heckerling, who'd made her directorial debut with the feature, helmed three of the show’s seven episodes. Of local interest is the fact that Heckerling made working visits to Vancouver in 1989 and 1990 to direct Look Who’s Talking and its sequel Look Who’s Talking Too, comedies starring teen-movie grad John Travolta. She returned in 1993 as the producer of the third film in the series, Look Who’s Talking Now.
It was John Hughes, of course, who built a career on teen ensemble films, most of them set in suburban Chicago. A screenwriter, he made his own directorial debut with 1984’s 16 Candles, following it with The Breakfast Club (1985) and Ferris Bueller’s Day Off (1986). He also wrote the script for Howard Deutch’s 1986 high-school comedy Pretty in Pink. Hughes is remembered for making Molly Ringwald a star.