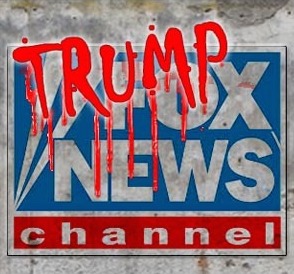 Is Rupert Murdoch’s Fox News Channel being targeted by celebrity presidential candidate Donald Trump?
THE WHOLE STORY — To see a complete list of the more than 700 items currently posted to Reeling Back, visit the FULL SITE INDEX. To locate specific names or subjects, type your key word(s) into the Search box (located in the right-hand corner of the nameplate above), and click on the magnifying glass (search) symbol. The archive grows almost daily, so feel free to explore.


Ever since he declared his intention to run for president, I’ve wondered why someone like the Donald would want to trade his palatial Trump Tower residence for the White House. And now, after looking at a list of his favourite movies, I'm pretty sure that I know the answer.

Finally, it makes sense. Donald Trump may not be bright, but he is brilliant.

The larking billionaire, who announced his candidacy for the U.S. presidency just 16 months ago (on June 16, 2015), may not win the White House in November, but he’s on track to win the real prize in this race: fame, fortune and international influence. He’s about to become a major media mogul.

For me, the missing piece in the story has always been the “why”. The Oval Office and the outspoken celebrity were hardly a good fit. Why would a man used to getting his own way willingly assume the considerable public (and private) constraints of presidential responsibility? Where’s the fun in that?

A few days ago (on October 18), the penny dropped. Catching up on the previous evening’s edition of The Daily Show, I saw a segment lampooning the day’s “news” about his campaign. It ended with a title card for a “Trump News Network.” Later the same morning, I read a note posted by globe-trotting author Matt Hughes.

“The news in the Financial Times that his [Trump’s] son-in-law was trying to get a private banker to invest in a Trump TV channel confirms what I've been thinking ever since he took on Ailes and Bannon as advisers: he intends to steal Murdoch's audience and make himself a lot of money," Hughes wrote. "Winning the election would work against that ambition, so he's stirring up the mob (consolidating his audience) while making sure he loses. Last thing the guy wants is an actual job where he has to learn stuff and think about hard things.”

Now (to paraphrase Julie Newmar’s android character on My Living Doll), that does compute! Trump’s entire presidential campaign has been one long con, a two-year promotion for his greatest business venture, a new “news” network designed to trump the aging Rupert Murdoch’s troubled television franchise.

Now consider the Donald’s favourite movie. In a 2012 interview with the Movieline website's editorial director Frank DiGiacomo, Trump named Orson Welles's 1941 classic Citizen Kane. The fictionalized biography of American media mogul William Randolph Hearst, it told the story of a politically ambitious businessman who enjoyed a lifetime of wealth and influence. (Other Trump movie picks were Gone With the Wind, The Godfather, GoodFellas and The Good, the Bad and the Ugly.)

Show business and politics have been coming together for a long time. The process shifted into high gear in 1980, the year that Americans elected TV pitchman and corporatist spokesmodel Ronald Reagan as their 40th president. Stay tuned for more of your favourite show, right after this break for a (rigged) election.

Here at Reeling Back, we’ve been enjoying some down time. The 10 most recent additions to the archive are:

THE PUPPETOON MOVIE — Though producer-director George Pal is best known for his special effects features from the 1950s, this 1987 documentary celebrates his earlier “puppet cartoon” shorts. Included are 11 of his stop-motion animation films made between 1937 and 1947. (Posted September 30)

A CLOCKWORK ORANGE — Already a legend in the science-fiction community for his uncompromisingly intense 2001: A Space Odyssey (1968), director Stanley Kubrick followed up with this censorship-baiting 1972 adaptation of the Anthony Burgess novel. Darkly sardonic, it remains a timely critique of societal norms. (Posted September 30)

SCIENCE FICTION COMES OF AGE —  In a magazine feature previewing 1972’s second Vancouver S-F Convention, I examined the evidence that the genre was in transition from the margins to the cultural mainstream. The point would be driven home in an address by the event’s guest of honour, author Philip K. Dick. (Posted September 30)

EXPO 86: FINAL THOUGHTS — The 38th and final item in the Reeling Back series considered the fair’s legacy and the permanent movie houses that remained after the closure of the Canada, British Columbia and Expo Centre pavilions. (Posted September 27)

LOYALTIES — Set in small-town Alberta, director Anne Wheeler’s 1986 drama focuses on the lives of two women who discover how much they have in common. A keenly involving tale of growth and self-realization, it was Wheeler’s first independent feature. (Posted September 23)

EXPO 86: SINGAPORE AND HONG KONG — Attracting tourism was the main goal of the shows offered at the pavilions of the two Asia-Pacific city states. (Posted September 19)
[83]