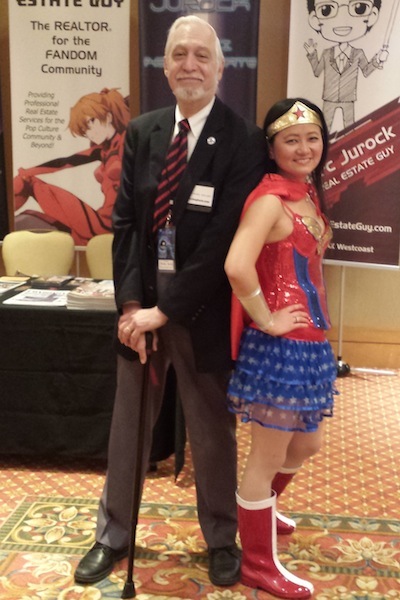 In the VCON 40 dealers room, Reeling Back byliner Michael Walsh poses for a picture with "Wonder Woman" Marleen Ong, who was representing Richmond, B.C.'s, Sci-Fi Real Estate Guy Marc Jurock at the fan gathering.
THE WHOLE STORY — To see a complete list of more than 530 items currently posted to Reeling Back, visit the FULL SITE INDEX. To locate specific names or subjects, type your key word(s) into the Search box (located in the right-hand corner of the nameplate above), and click on the magnifying glass (search) symbol. The archive grows almost daily, so feel free to explore.


A Vancouver Science Fiction Convention tradition since 1999, our panel discussion devoted to the expanding 'verses of writer-director Joss Whedon seems to offer up new surprises every year. The 2015 edition added yet one more distinctly Joss-ian memory to the growing list.

The moment was positively Whedonesque. In my role as moderator of VCON 40's Worlds of Whedon panel I'd just finished introducing the panel members. I'd noted, in my introductory remarks, a phone call earlier that morning from Dr. David Lavery, a founding director of the Whedon Studies Association.

We were a few minutes into a discussion of what we might expect next from the 51-year-old creative genius, when a loud bell sounded in the hall of the Sheraton Vancouver Airport Hotel. And again.

By the third, panel member Pauline Walsh was on her feet, having recognized it as a fire alarm. As vice-chair of the convention, it was her job to assess the situation and take appropriate action.

The building had to be evacuated. As Ms Walsh spread the word to the other rooms on the floor, she was joined by panel member Lisa Gemino, who has worked as a first responder in the Greater Vancouver region's 911 system.

Ms Gemino took charge of our room and guided the lot of us down the stairs to the nearest exit. Along the way, panel member Don DeBrandt, an author and genial raconteur who'd been in mid-sentence when the alarm sounded, decided that the loss of our meeting room was no reason to abandon our discussion.

When our group reached the main floor, he directed us all to a courtyard equipped with outdoor tables and chairs. While most of the convention's members milled about in the hotel's front parking lot, our panel reconvened in a landscaped patio behind the building. As the discussion turned to the alleged misogyny in Whedon's Avengers: Age of Ultron, I thought about the previous five minutes, and how what had just happened might have be scripted by the unambiguously feminist creator of Buffy the Vampire Slayer.

Team players? As Buffy and Faith did what needed to be done, thoughtful watcher Giles guided the situation back to where everyone wanted it to be.

As we returned to our scheduled discussion, firefighters arrived on the scene. As they went about their business — whatever had triggered the alarm caused negligible damage and no injury — we went about ours.

Following our convention, my focus shifted to Canada's 42nd general election. Voters woke up on October 20 to the news that a new government would be formed by 43-year-old Justin Trudeau, the leader of the Liberal Party. In the runup to the balloting, the focus of my Reeling Back postings was on political cinema. The 10 most recent additions to the archive are:

ACTION: THE OCTOBER CRISIS OF 1970 — Balanced and thorough, National Film Board writer-director Robin Spry's 1974 documentary sets out the historical background that led to  the single most important political and social crisis in Canadian history. (Posted October 19)

BURIED ON SUNDAY — Paul Gross stars as the genial separatist who leads the Atlantic Coast island of Solomon Gundy to independence in this 1993 political comedy written and directed by Halifax-based Paul Donovan. (Posted October 18)

BINGO — Made in the wake of the War Measures Act, Québécois writer-director Jean-Claude Lord's 1974 fictional thriller was the first feature to come to grips with the issue of youth radicalization in marginalized communities. (Posted October 17)

LES ORDRES — Based on interviews with some 50 persons detained (but not charged), writer-director Michel Brault's 1974 "purposeful drama" examined the human costs of the War Measures Act on Québec society. (Posted October 16)

MICHEL BRAULT (interview) — During a 1976 visit to Burnaby's Simon Fraser University, the writer-director shared his thoughts on the War Measures Act, the dangers of political forgetfulness and the making of his 1974 feature Les Ordres. (Posted October 16)

TIME TRAVELLER'S FILM QUIZ — Noting that VCON 40's theme was "Time Travel," Reeling Back invited site visitors to test their knowledge of movies in which dates are destinations. (Posted October 2)

TEENAGE MUTANT NINJA TURTLES III: THE TURTLES ARE BACK . . . IN TIME — Canadian actor-turned-director Stuart Gillard attempted to save the failing film franchise in 1993 by sending his Heroes in the Half Shell to medieval Japan. An inspired change of direction, it failed to find favour with the fans. (Posted October 2)

TIMECOP — Martial arts action star Jean-Claude Van Damme had the title role in director Peter Hyams's 1994 adaptation of the Dark Horse comic book about a lawman charged with enforcing the rules against messing with the past. (Posted October 2)

PEGGY SUE GOT MARRIED — Looking for a hit after a string of box-office failures, director Francis Ford Coppola tried something completely different. Actress Kathleen Turner gave him a hit (and won herself an Oscar nomination in the process) with this 1986 science-fiction comedy. (Posted October 2)

JOHN SAYLES (interview) — On the road to promote the 1981 opening of his directorial debut feature, The Return of the Secaucus Seven, the independent filmmaker sat down with me to discuss the challenges involved in working outside of Hollywood's studio system. (Posted September 28)