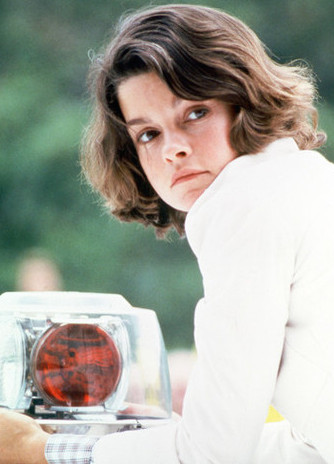 
Nineteen ninety-four was a very good year for Michael Crichton. At the top of his game as an entertainment innovator, he had the distinction of scoring a pop-culture hat trick. Jurassic Park, the feature film adapted from his 1990 novel, was 1993’s top-grossing picture. ER, the TV medical drama that he created, made its debut at No. 1 in the ratings, and Disclosure, his novel about sexual harassment in a high-tech company, quickly rose to the top of the New York Times best-seller list. Writing came easily to Michael Crichton, who was born on this day (October 23) in 1942. He published his first novel (1966's Odds On) while a student at the Harvard Medical School. In 1972, he adapted his 10th novel (1972's Binary) as a screenplay, which he then directed as the made-for-TV movie Pursuit. A techno-thriller specialist, he made his theatrical directing debut with the theme-park shocker Westworld, 1973’s sci-fi hit. The four Crichton-directed films being added today to the Reeling Back archive (with links to each following the Afterword to this posting) include his adaptation of a Robin Cook novel in which a young surgeon discovers that black-market organ sales are part of Big Medicine’s business plan: 1978’s Coma.

COMA. Music by Jerry Goldsmith. Based on the 1977 novel by Robin Cook. Written and directed by Michael Crichton. Running time: 113 minutes. Rated Mature. MICHAEL CRICHTON IS LUCKY. The medically-trained novelist has seen at least three of his books go before the movie cameras under the supervision of good directors, including 1971’s The Andromeda Strain, directed by Robert Wise; The Carey Treatment, by Blake Edwards (1972); and The Terminal Man, by Mike Hodges (1974).
Dr. Robin Cook was not so lucky. The film version of his 1977 book, Coma, was adapted for the screen and directed by Michael Crichton.
Crichton, at six feet, nine inches, is one of the biggest disappointments to set foot on a movie set. His film projects — a made-for-TV movie called Pursuit, the 1973 theatrical feature Westworld, and now, Coma — reflect an oafish, pot-boiler mentality.
His current film is a “terrible secret” picture, the kind of movie in which the hero gradually becomes aware that his worst fears are coming true. In this case, the hero is a woman, Dr. Susan Wheeler (Geneviève Bujold), surgical resident at Boston's Memorial Hospital.
Following the death of a close friend, Wheeler develops an intense interest in coma cases. She discovers, to her horror, that the hospital has had an inordinately large number of young patients go under anesthetic for minor surgery and never wake up.
In the course of her investigation, she is harassed, threatened and stalked by a hired killer. Undaunted, she pursues the truth to the mysterious Jefferson Institute, a bizarre treatment centre to which the comatose are invariably sent.
Despite a high-gloss finish and a cast enhanced by the likes of Richard Widmark and Rip Torn, Coma is strictly a fantasy factory second. Crichton's screenplay is a mess of loose ends, unresolved plot complications, underdeveloped characters and ignored issues.
The terrible secret that Wheeler uncovers is the existence of a well-organized, apparently international trade in human organs. Comas are being induced in otherwise healthy persons to insure that the spare parts dealers have a reliable source of supply.
It's an uncomfortably plausible idea, full of real moral, legal and ethical considerations. Crichton, unfortunately, prefers to exploit rather than explore such issues. For him, it's just a convenient excuse for another lady-in-distress programmer.
He starts out by introducing us to a remarkable young woman. Wheeler, as played by Bujold, is a capable, intelligent, independently minded professional.
She refuses to be pushed around by her dense, self-centred boyfriend Mark Bellows (Michael Douglas), a fellow doctor and a man who prefers his women a little less liberated. She is, according to Mark, afraid of a "real relationship."
Like the transplants issue, their adjustment to one another as coequal adults could have been a vital and interesting sub-plot. That Crichton fails to develop it is, perhaps, the final blow.
As in Westworld, he shows himself to be a director of sets and machinery, with no idea of how to direct people. Aside from Bujold (who breathes fire into every part she plays, regardless of director) and a couple of genuinely tense chase scenes, Coma is more of a sleeper than a thriller.

Afterword: I had not been kind to 1973’s Westworld, novelist Michael Crichton’s debut as a feature film director. I was even less kind to his second feature, a techno thriller that I classified a “terrible secret” picture. Given the writer-director’s training as a medical doctor I’d expected more, well, reality. Coma’s big surprise — that for-profit medicine was subject to shocking abuse — was kind of obvious, and got in the way of the real shocker, that the entire American health-care system was broken. Crichton knew this, and yet punted on his responsibility to explore why.
I was disappointed because he’d really come close to the issue in The High Cost of Cure, a 1970 piece he wrote for Atlantic Magazine based on the research he’d done for his non-fiction book Five Patients: The Hospital Explained. “The United States spends more of its gross national product (6.2 per cent) on medical care than any other country in the world," he said. "It spends a larger absolute sum than any other country in the world. Yet on most objective standards of health — infant mortality, life expectancy, and so on — it is far from the leader.” (In 2018, health care spending's share has nearly tripled, to 17.9 per cent of GNP)
“Other countries are doing better, and most of them have some form of socialized medicine. The United States is extraordinarily backward in this respect . . . Without question, the notion of the doctor as legitimate fee-for-service entrepreneur, making his fortune from the misfortunes of his patients, is old fashioned, distasteful, and doomed. It is only a question of time.” Forty years (and who knows how many thousands of unnecessary deaths) later, American presidential hopefuls are still debating the “health-care issue.” Michael Crichton died in 2008 at the age of 66, after several months battling lymphoma.

Behind the camera: The four Michael Crichton-directed features posted to the Reeling Back archive today include his 1978 medical thriller Coma, the 1979 historical adventure The Great Train Robbery, LINK <> the 1981 media mystery Looker, and the 1989 courtroom drama Physical Evidence.