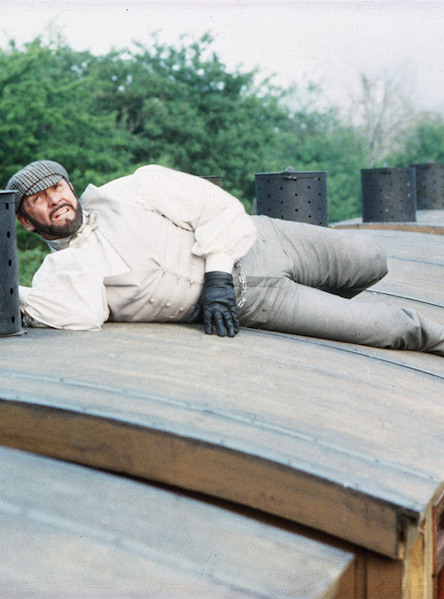 Edward Pierce (Sean Connery) indulges in a spot of derring-do atop the London to Folkestone express in writer-director Michael Crichton’s 1979 adventure The Great Train Robbery.


Victorian adventure on the right track


Nineteen ninety-four was a very good year for Michael Crichton. At the top of his game as an entertainment innovator, he had the distinction of scoring a pop-culture hat trick. Jurassic Park, the feature film adapted from his 1990 novel, was 1993’s top-grossing picture. ER, the TV medical drama that he created, made its debut at No. 1 in the ratings, and Disclosure, his novel about sexual harassment in a high-tech company, quickly rose to the top of the New York Times best-seller list. Writing came easily to Michael Crichton, who was born on this day (October 23) in 1942. He published his first novel (1966's Odds On) while a student at the Harvard Medical School. In 1972, he adapted his 10th novel (1972's Binary) as a screenplay, which he then directed as the made-for-TV movie Pursuit. A techno-thriller specialist, he made his theatrical directing debut with the theme-park shocker Westworld, 1973’s sci-fi hit. The four Crichton-directed films being added today to the Reeling Back archive (with links to each following the Afterword to this posting) include the adaptation of his own jaunty historical novel in which a daring gang of Victorian adventurers plot the theft of a government gold shipment, 1979’s The Great Train Robbery.

THE GREAT TRAIN ROBBERY. Music by Jerry Goldsmith. Written and directed by Michael Crichton. Running time: 110 minutes. Rated Mature entertainment. The Queen really ought to knight Sean Connery. Although I'm sure such noble gentlemen as Lord Laurence Olivier, Sir John Gielgud and Sir Richard Attenborough deserve their honours, I don't enjoy watching them anywhere near as much as Connery, a 49-year-old Scotsman who fills every role he takes on with energy and commitment.
Without Connery, The Great Train Robbery might have been a rather dismal affair. It could have fizzled out, like last year's Silver Bears [1978], or worse still, lurched along like Hooper, promising much and delivering little.
Connery proves to be Michael Crichton's secret ingredient, an actor able to handle not only finely-tuned comedy and melodrama, but his own stunt work as well. Indeed, United Artists is offering a $10,000 reward to anyone who can prove that Connery did not risk life and limb atop a moving train.
It seems unlikely that the company will have to pay off.
Towards the end of the film,we actually see Connery (or someone whose resemblance to him is exact in every detail) leaping from coach to coach, ducking to avoid low bridges and damn near falling from the roof of the London to Folkestone express. He's doing it for the money, of course.
The time is 1855. Edward Pierce (Connery) is a gentleman who is not quite what he seems. When he learns that the British war office makes a weekly shipment of £25,000 in gold by rail to the coast, he decides to steal it.
Never mind that no one has ever robbed an English train before. Pierce has a plan. But first he must obtain copies of four separate keys, the only way to open a safe in an age before high explosives or combination locks.
Crichton, who authored the best-selling 1975 novel upon which the film is based, offers filmgoers a Victorian caper comedy. Together with his mistress, an actress named Miriam (Lesley-Anne Down), and Agar (Donald Sutherland), a pickpocket with a talent for locksmithing, Pierce sets out after the gold.
Crichton is not altogether serious. Although he based his book on a real incident,  he created a set of characters and circumstances that suit his purposes as a story-teller rather than as a social historian,
In the film version, he concentrates even more on the comic aspects of the caper. To carry out his plan, the Pierce gang must go through a series of complex deceptions and impersonations,  most of them involving disguises and elaborate play-acting.
Sutherland, sedentary and hollow-eyed as the psychic in Bob Clark's Murder by Decree,  bounces and bubbles as Connery's eager accomplice. Down, a television actress whose last big screen appearance was in Daniel Petrie’s The Betsy, manages to carry off a difficult, underwritten role with stylish ease.
Up till now, director Crichton has been known for his futuristic thrillers, including 1973’s Westworld, the story of a robot-run amusement park, and Coma, (1978) a nightmare tale of transplant surgery.
Here, he adopts a more leisurely pace, partly as a reflection of the less hectic Victorian era and partly because his complex plot unfolds as a series of set pieces. The danger was that the whole thing could have turned into a rather flat intellectual exercise.
It didn't. By taking hold of Crichton’s material with such infectious vigour, Connery and his merry crew turn the tale into a rollicking romp. The Great Train Robbery is wicked, watchable fun.

Afterword: It took more than twenty years but, on July 21, 2000, Her Majesty Elizabeth II took my advice and knighted Sean Connery at a ceremony in Edinburgh’s Holyrood Palace. It was an act of serious noblesse oblige on the part of Queen, given the cheeky Scot’s well-publicized membership in the Scottish National Party, together with his advocacy for Scottish independence.
The Great Train Robbery was preview screened in New Orleans on Friday, February 2, 1979, in the Robert E. Lee Theatre on the city's northern lakefront. The next morning the assembled critics gathered for a press conference that included Connery, Michael Crichton, Lesley-Anne Down and the film’s producer, John Forman. When my turn came, I asked Crichton which among his books was his favourite. Despite the fact that my question was wildly off topic, he took it seriously, and said that he was really proud of his 1976 novel Eaters of the Dead. Not his best-known work, it was the story of a 10th-century Arab adventurer who joins a band of Vikings on a hero’s quest. There was a twist to the tale and he’d had a lot of fun writing it, he told me. At the time, he was in negotiations with Orion Pictures, and it was to be his next project as a director. Intrigued, I sought the book out. Midway through, I realized that it was a clever rewrite of the Beowulf saga as seen through the eyes of an historian from the Middle East. Thereafter, I came to appreciate Crichton the writer, and enjoyed many of his later books.
That 1979 production deal came to naught. Twenty years after our brief conversation, though, Eaters of the Dead was adapted for the screen as The 13th Warrior (1999). The directorial credit went to John McTiernan, although various sources tell us that he was fired late in the production for budget excesses. Crichton was called in to reshoot some of the picture, which ended up costing considerably more than it could ever make back. Generally regarded as a cinematic disaster, the film was made in B.C., and so contributed to the growth of the local film industry. In addition, it featured a great musical score by Crichton’s regular composer, Jerry Goldsmith.