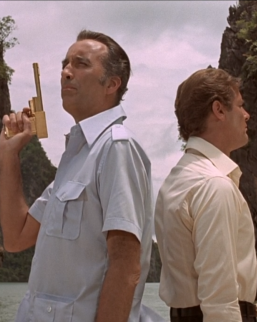 Scaramanga (Christopher Lee) readies himself for an old-fashioned duel with James Bond (Roger Moore) in director Guy Hamilton’s 1974 The Man with the Golden Gun.

In the same business


Half wits finding fun in fouling up


On this day (February 17) in 1952, vacationing London newspaper executive Ian Fleming began writing his first novel, a spy thriller that he would call Casino Royale. The moment is recalled in the opening scene of the 2014 TV miniseries Fleming: The Man Who Would Be Bond, where we are told that the former Royal Navy intelligence officer is on his honeymoon. Not quite. In truth, the 43-year-old bachelor was some five weeks away from his March 24 marriage to his long-time mistress Ann Charteris. In common with most of the show’s biographical details, the scene had a Flemingesque “precedent in truth.” His creation, MI6 operative James Bond, was more a secret policeman than a spy, but the self-centred character proved to be a perfect fit with the post-Second World War “Me” generation. Making his literary debut the same year as Playboy magazine, he offered the sort of brand-conscious “entertainment for men” that passes for sophistication in a consumer culture. In 1961, Canadian producer Harry Saltzman optioned the film rights to Fleming’s Bond novels and, a year later, the movie franchise was born. To date, there have been 25 features, with a 26th (the much-delayed No Time to Die) scheduled for release in October. Today, we’ll add five Bond titles to the Reeling Back archive (with links to each following the Afterword to this posting), a package that includes director Guy Hamilton’s third and final Bond feature, 1974’s The Man with the Golden Gun.

THE MAN WITH THE GOLDEN GUN. Written by Richard Maibaum, Tom Mankiewicz. Music by John Barry. Directed by Guy Hamilton. Running time: 125 minutes. General entertainment. THE  CRASH HAS COME. With director Guy Hamilton’s The Man With the Golden Gun, latest and least of the 007 epics, the bottom finally falls out of the Bond market.
In his ninth screen outing, Cdmr. James Bond, late of Her Majesty's Royal Navy and the world's most successful secret agent, comes a cropper. That crash, or more precisely a dull thud, is the sound of actor Roger Moore, otherwise known James Bond Mark III, falling flat on his face.
He narrowly missed doing it last year [1974] in Live and Let Die, eighth film in the long-running series and Moore's debut in the role. He was able to keep his footing because the Bond brokers wisely decided to ease him gently into the part.
Last year, he was the central character without being the central focus of an action-comedy. Remembering that the Las Vegas car chase had been the most talked-about scene in 1971’s Diamonds Are Forever, the last Sean Connery Bond movie, the makers of Live and Let Die offered audiences an almost uninterrupted series of pursuits featuring cars, buses, power boats and small aircraft.
The well-constructed action sequences effectively masked the fact that Roger Moore was just not right for the role.
There are those who argue — as Kingsley Amis does in The James Bond Dossier (New American Library; 1965) — that Sean Connery was not right for the role. "'Mr. Connery could put up a show as a Scottish businessman," Amis says, "but never as (the) Scottish baronet" that Ian Fleming created.
Nevertheless, casting Connery as the screen Bond was a stroke of genius. He made the role uniquely his own and, in the process, grew to hate it.
That sense of contempt and self-mockery, together with Connery's unassailable masculine self-confidence, was the James Bond style. It was a style that suited the times — the 1960s — perfectly.
Roger Moore, the producers are at pains to tell us, is really what they had in mind all along. He had actually been their first choice for the Bond role. Honest to God, hope to die, they say.
Too bad. Connery had the knack of being as one with the audience. We recognized that Bond's adventures were patent nonsense, but they were an attractive absurdity that we all heartily enjoyed.
Moore, on the other hand, plays him as an insincere Boy Scout. He really thinks he's a hero. He is actually scandalized when Scaramanga (Christopher Lee), the professional assassin who is the picture’s man with the golden gun, suggests that they are in the same business.
The full extent of the disaster can be seen by comparing the current film to 1967’s You Only Live Twice, fifth film in the series and Bond’s previous trip to the Far East. Set in Hong Kong and Japan, it was directed by Lewis Gilbert from a script by Roald Dahl.
One of the most distinctive additions to the series, Gilbert’s film consciously “orientalized” 007. Bond was made a part of the overall machinery, the pawn of an inexorable fate over which he had virtually no control.
The film maintained a consistency of theme and image that began with a recumbent 007 being shut up in a Murphy bed. Several times in the movie we see him in the process of helpless descent, as he is buried at sea, dropped into Tiger Tanaka’s subterranean office, or left alone to die in a power-diving aircraft.
The climax, of course, is his descent into Blofeld’s volcano.
The theme of orientalization is given a visual equivalent in the cosmetic surgery that Bond undergoes in order to infiltrate the villain’s  private island. Throughout, we can see that there is a fine cinematic stylist at work.
The Man with the Golden Gun has no such luck. At the beginning, there is a hint that director Hamilton will continue in the action-comedy vein.
His film opens with the professional killer "working out" in a private fun house full of robot adversaries and a waxworks image of Moore-Bond. Later we see that British intelligence has established its offices in a slanted stateroom of the liner Queen Elizabeth, currently rusting on its side in Hong Kong harbour.
Later still, Moore-Bond describes a villain’s statue-filled garden as "Grislyland." For a while it seemed as though writers Richard Maibaum and Tom Mankiewicz were going to build their screenplay around that promising fun-house metaphor.
Alas, they don't. With a lack of enthusiasm that carries over into Guy Hamilton's direction, they have confected a couple of unimaginative chase scenes and, as a sop to the martial arts fans, a visit to a kung fu school.
In the process we get to see "hero" Bond threaten to beat up a girl, cheat a child and manhandle a midget. In his kung fu encounter he is saved by a pair of giggling-but-lethal schoolgirls.
M (Bernard Lee) is, unfortunately, on the right track when he snarls “of all the fouled-up, half-witted operations!” The Man With the Golden Gun is the most fouled up of all.

Afterword: Though I can find no evidence to support the notion, I like to think that Ian Fleming was riffing on the The Man with the Golden Arm (Nelson Algren’s 1949 novel about opioid addiction, later made into a 1955 Otto Preminger film) when he chose the title for his last James Bond adventure, 1965’s The Man with the Golden Gun. In the book, his villain Scaramanga’s trademark weapon is a gold-plated Colt .45 revolver loaded with silver-jacketed solid-gold bullets. In the gadget-happy 1975 movie, it’s a custom-made item assembled from four otherwise ordinary household items: a fountain pen, cigarette lighter, cigarette case and a cuff link.
Scaramanga’s preference for golden armaments puts him in the company of such historic villains as Adolf Hitler, Hermann Goering, Iraq’s Saddam Hussein and Libya’s Muammar Gadaffi, all of whom owned one or more such items. The question, of course, is just how practical are these fashion statements for doing the actual job? The answer, according to contributors to the MI 6 Community website, is — not very. The general consensus is that gold and its alloys are far too soft for the manufacture of the necessary parts, with the result that a gold weapon would rapidly fail, or even blow up. That said, be assured that the National Rifle Association continues to fight for your right to keep and bear one, regardless of the safety issues.