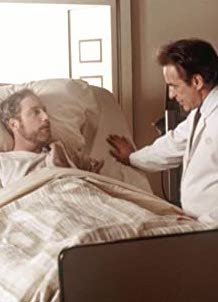 Dr. Michael Emerson (John Cassavetes) agonizes over the determination of quadriplegic patient Ken Harrison (Richard Dreyfuss) to end his life in director John Badham’s 1993 Whose Life Is It Anyway?.


Taking responsibility for the final decision


Not everyone will be happy with the result of the election being held today (November 3) in the United States. Perhaps the single point of agreement among us is that the outcome will be historic. In an attempt to stay positive, I’ve been reading John Badham on Directing, a reminder of past pleasures and future possibilities. In his half century behind the camera, Badham has gone from television to Hollywood features, back to TV and into the classroom, a creative force to be reckoned with all the while. Given the amount of work he’s done locally, the British-born American director qualifies as an honourary Canadian. He may have made a working visit to B.C. as early as 1974 to shoot scenes for Reflections of Murder, his TV remake of Les Diaboliques. Three of his 16 theatrical features — Stakeout, Bird on a Wire and Another Stakeout — were shot in Vancouver. Since returning exclusively to TV production in 1997, he’s made all of his broadcast movies (six) and the majority of his series episodes on this side of the border (most recently a 2020 Sirens episode). Today, I’m adding a review of his new book and five of his feature films to my Reeling Back archive (with links to each following the Afterword to this posting), a package that includes his dramatic examination of euthanasia, 1981’s Whose Life Is It Anyway?.

HE WAS NOT A pop star, a politician or one of Margaret Trudeau's  paramours. His passing, on November 2, 1981, was not reported on the news wires and was, therefore, not recorded in the daily press.
Wallace Wood, 54, cartoonist, illustrator, humourist and small press publisher, was the best of a generation of superb comic book artists. During a prolific, productive career he contributed material to countless publications, most notably EC’s science-fiction comics and Mad Magazine.
According to an obituary that appeared in the January issue of the fan magazine Locus, "in 1978, he suffered a stroke which prevented him from drawing." Wood's death was the result of "a self-inflicted gunshot wound."
Those of us who knew him only through his work will mourn him along with his friends and colleagues. Spa fon, Wally.

WHOSE LIFE IS IT ANYWAY? Written by Brian Clark and Reginald Rose. Based on the 1979 stage play by Brian Clark. Music by Arthur B. Rubinstein. Directed by John Badham. Running time: 119 minutes. Rated Mature with the B.C. Classifier’s warning "some very coarse and suggestive language, occasional nudity.” IN WHOSE LIFE IS It Anyway? Richard Dreyfuss plays a Boston sculptor named Ken Harrison, an artist who lives for his work. Following the completion of a major piece, he is involved in an automobile accident.
Surveying the broken body that’s been delivered to his emergency room, Dr. Michael Emerson (John Cassavetes) sums up the situation. "The best we can hope for is a quad."
The surgeons save Harrison’s life.
Or do they?
As a quadriplegic, he is paralyzed below the neck. He depends upon a dialysis machine to do the work of his non-functioning kidneys. He can do nothing for himself.
Six months after the accident, Harrison decides that he's had enough. He asks to be discharged from the hospital.
Emerson refuses to take him seriously. "Without dialysis, he'll be dead within a week."
Precisely.
Harrison wants to die. "You people seem to think it's all about survival," he says with passion. "The work is what’s important. And I’ll never work again."
Based on Brian Clark's London stage play, Whose Life offers filmgoers a finely-tuned life-and-death debate. Deprived of mobility and physical sensation, Harrison argues that he should have the final choice over what’s left to him.
Emerson, on the other hand, is sworn to preserve life. As far as he's concerned, suspending Harrison's treatments would make him a murderer.
Ever the fighter, Harrison finds a reluctant ally in Dr. Clare Scott (Christine Lahti), and a tenacious champion in Carter Hill (Bob Balaban), an outwardly unimpressive little lawyer who admits that "this is one case I could bear to lose.”
"Well," Harrison quips back, "if you do, it’s a life sentence for me.” To gain his freedom, they must convince the courts that the patient is sane, and that his self-destructive request is not unreasonable.
In collaboration with Reginald Rose, the issues-oriented creator of TV’s The Defenders [1961-1965], Clark has put some good, solid dialogue in the mouths of his characters. Given the sober subject matter, their script is a remarkably good-humoured document.
On the whole, it survives the florid direction of John (Dracula) Badham and actor Cassavetes's tendency to go over the top in his portrayal of a waspish old medical curmudgeon. Dreyfuss, to his credit, generates nothing but sympathy for his plight because he clearly is tortured by the idea of permanent physical immobility and dependence.
Though compelling as a dramatic exercise, Whose Life at first left me wondering whether or not its premise was entirely credible. Would an intelligent, creative individual really choose death if he could no longer practice his art?
It’s a choice I can only face in the abstract. That said, I have to wonder what Wally Wood would have had to say about Ken Harrison’s decision.

Afterword: In hindsight, it’s obvious that I was not comfortable with the idea of euthanasia. For one thing, I didn’t use the word in the above review. For another, I backed into the review by writing an actual obituary, one that noted the death of an artist whose work I had long admired. It was my way of acknowledging that the issue was not a simple one. Although I firmly believe that medical assistance in dying should be everyone’s legal right — as it now is in Canada — I couldn’t imagine choosing it for myself.
Nor was euthanasia a subject that American movies found comfortable. In 1981, the year that director John Badham’s Whose Life Is It Anyway? was released, you could count on the fingers of one hand the number of Hollywood pictures in which it was a plot element. The list included Daniel Petrie’s 1960 adaptation of The Bramble Bush, a “big bold novel” from 1958, and 1971’s Johnny Got His Gun, writer-director Dalton Trumbo’s adaptation of his own 1939 novel. A “mercy killing’ also provided a shocking subplot in Cecil B. DeMille’s circus epic, The Greatest Show on Earth (1952).
Television took up the challenge with such small-screen features as Jud Taylor’s Act of Love (1980) and Paul Wendkos’s Right to Die (1987). After that it would be another decade (and the beginning of a new century) before the subject returned to the creative agenda. In 1998, Carl Franklin’s One True Thing, starring Meryl Streep as a cancer-stricken senior, suggested that the boom generation might be ready to confront its own mortality. More films followed, including Clint Eastwood’s Oscar-winning Million Dollar Baby (2004) and Barry Levinson’s You Don’t Know Jack (2010), the made-for TV biography of euthanasia advocate Dr. Jack Kevorkian. Since 2008, assisted suicide has been legalized in seven of the 50 American states.
Perhaps the most compelling addition to the debate in recent years has been the three-season (2017-2019) Canadian TV series Mary Kills People. Created by Vancouver writer-producer Tara Armstrong, it stars Caroline Dhavernas as Mary Harris, a Toronto emergency room physician whose work as an end-of-life counselor includes suicide assistance.