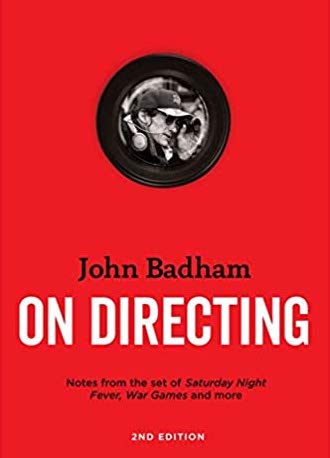 The 2nd edition of John Badham on Directing adds a survival guide for working in new media.


Not about to give up on art or craft


Continuing change in the power dynamics of the entertainment industry have prompted a veteran filmmaker to update his 2013 book. John Badham on Directing - 2nd Edition offers a timely reassessment of the art and craft in the age of episodic television.

JOHN BADHAM ON DIRECTING - 2nd Edition: NOTES FROM THE SET OF SATURDAY NIGHT FEVER, WAR GAMES, AND MORE. By John Badham. Michael Wiese Productions, 2020. 275 pp. Illus., index. $37.95 (paperback).  A LIFETIME AGO, WHEN I was a college undergrad, there were certain professors whose lectures were standing-room-only events. It didn’t matter if you were actually taking their courses; they had the kind of classroom charisma that made for a great learning experience.
I can imagine that John Badham, a professor of Film and Media at California’s Chapman University, is that sort of teacher. Since 2004, the innovative director has divided his time between the classroom and the world of TV series production. The personality that comes across in the second edition of John Badham On Directing: Notes from the Set of Saturday Night Fever, War Games, and More makes me wish that I had a seat in his lecture hall.
Originally published in 2013, his no-nonsense textbook drew rave reviews from industry insiders and Badham’s directorial peers. A practical guide to craft proficiency, it set out the essentials (in the words of Francis Ford Coppola) “for anyone who is serious about directing.”
OK. But what about the rest of us? What’s in it for the general reader, those of us who consume the final product with little thought for (in Badham’s words) the “part art, part craft” that is direction?
Lots. Written in a conversational, often colloquial style, his book is a backstage pass that gives us access to the realities of “filmmaking as a human process.” In setting down specific rules, he makes his case with relevant anecdotes (recalling movies we’ve all seen, or performers we know). Throughout, space is given to insights from some 40 producers, actors, and directors that give the text the immediacy of a Zoom conference.
The general reader can enjoy his book as a career memoir — a generous, even self-effacing chronicle of what he has learned during nearly 50 years behind the camera. “The fixed idea is the death of the creative person,” Badham tells us after relating an embarassing incident on the set of his 1976 comedy The Bingo Long Traveling All-Stars & Motor-Kings.
“It’s one thing to have a strong concept and a strong belief in what you want to do. At the same time, just because something is being created doesn’t mean it’s perfect, or even right. It would be nice if our first idea were always the best one. The truth is a lot harder. Any creative person has to be ready to modify, change, alter, chuck, deep-six or destroy an idea if it’s not working.”
Now, keep in mind that Badham is an educator. The learning process involves challenges, and reading him may well change the way you look at screen entertainment forever.
Throughout, the emphasis is on the collaborative nature of producing pictures.  Though he’s non-confrontational to a fault, between the lines it’s apparent that he’s no fan of method acting. His book is also a heads-up to critics about the limitations of the old auteur theory (an idea about the role of the director that critics came up with, and have promoted since the mid-1950s).
Or, to put it another way, he’s keenly aware of the changing times in the creative arts. He has updated his book to include a “survival guide to episodic television,” a universe in which producers rule and the director “has almost always been an afterthought . . . a hired gun in a minefield of politics.”
And yet TV is the future. It's the harsh reality that must be recognized, and negotiated with caution. Badham’s clear-eyed account of our cultural moment (and how we got here) makes his second edition a riveting read.

The above is an original Reeling Back review by Michael Walsh published in 2020. For additional information on this archived material, please visit my FAQ.