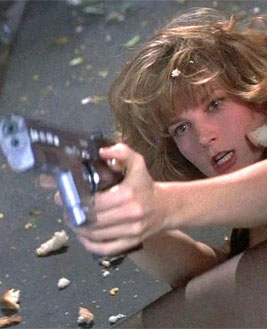 Improving on an original


Not everyone will be happy with the result of the election being held today (November 3) in the United States. Perhaps the single point of agreement among us is that the outcome will be historic. In an attempt to stay positive, I’ve been reading John Badham on Directing, a reminder of past pleasures and future possibilities. In his half century behind the camera, Badham has gone from television to Hollywood features, back to TV and into the classroom, a creative force to be reckoned with all the while. Given the amount of work he’s done locally, the British-born American director qualifies as an honourary Canadian. He may have made a working visit to B.C. as early as 1974 to shoot scenes for Reflections of Murder, his TV remake of Les Diaboliques. Three of his 16 theatrical features — Stakeout, Bird on a Wire and Another Stakeout — were shot in Vancouver. Since returning exclusively to TV production in 1997, he’s made all of his broadcast movies (six) and the majority of his series episodes on this side of the border (most recently a 2020 Sirens episode). Today, I’m adding a review of his new book and five of his feature films to my Reeling Back archive (with links to each following the Afterword to this posting), a package that includes his action-packed tale of resurrection and redemption, 1993’s Point of No Return.

POINT OF NO RETURN. Written by Robert Getchell and Alexandra Seros. Based on Luc Besson's original screenplay La Femme Nikita (1990). Music by Hans Zimmer. Directed by John Badham. Running time: 111 minutes. Restricted entertainment with the B.C. Classifier’s warning "frequent violence, occasional suggestive scenes and very coarse language.” MAGGIE GETS HER GUN.
A nasty-looking number designed for the government's own wet workers, it's a gift from her G-man mentor Bob (Gabriel Byrne). It comes complete with an extra ammunition clip and an assassination assignment.
Maggie Hayward (Bridget Fonda) is at the Point of No Return. Officially, she's already dead, executed in the manner prescribed by law for the murder of a Washington, D.C. policeman.
She awoke to the afterlife of The Compound, an off-the-books training facility within walking distance of the Capitol dome. There, a man dressed in black offered her a new life and the opportunity "to do something for your country for a change."
The alternative? Bob showed her photos of her funeral. Officially, she is buried in a nearby cemetery, in "row 48, plot 12."
Three years ago [1991], in Luc Besson's La Femme Nikita, Parisian punkette Marie Clement (Anne Parillaud) faced the same choice. Besson, who acknowledges the influence of comic books on his "approach to narrative," offered filmgoers the story of a sociopathic murderess recruited by some secret, nameless assassination bureau to kill for her country.
In the manner of so much European cinema these days, Besson' s picture was a high-style no-brainer. A violent, amoral action fantasy, it was a comic art tale full of mental and physical mayhem.
In Hollywood, of course, they could hardly wait to get an English-language remake into theatres. At first glance, Point of No Return looks like a scene-for-scene rerun of Besson's feature.
Look again. Director John (Stakeout) Badham's version is the exception that proves the rule about American remakes of foreign-language film hits. By combining a subtly rewritten script with a perfectly cast actress, his picture is a significant improvement on the original.
Besson's Nikita was played by Anne Parillaud, a Continental fashion model with negligible acting ability. Point of No Return stars Fonda, a young performer who makes up in talent what she lacks in conventional beauty.
No mere dress-up doll, her Maggie progresses from self-destructive, drug-addicted street kid to self-aware young woman. The training designed to focus her animal anger inadvertently taps into her forgotten humanity.
"I am different," the new Maggie will eventually tell her mentor. "Help me be better."
More real than that of her overseas counterpart, Maggie's struggle is all the more involving. Where Besson's narrative is little more than a series of escape scenes, Badham offers us a neo-noir drama of redemption.

Afterword: As it turned out, Luc Besson's original action heroine has had a series of afterlives. John Badham’s inspired 1993 remake Point of No Return is arguably her best. Less well known is an earlier Hong Kong homage, the 1991 Chinese-language Hei mao (Black Cat). Shot on location in Vancouver and New York City, it stars Jade Leung in the title role, a lethal lady with a talent for martial arts mayhem. Ms Leung and director Stephen Shin were back in Vancouver a year later for Chi saat Yip Lai Hing (Black Cat II; 1992), a sequel that featured Moscow as its alternative location.
Nikita's next incarnation was in the five-season (1997-2001) cable-TV series Nikita (aka La Femme Nikita in the U.S.). Shot in Toronto with cool, blonde Australian actress Peta Wilson in the title role, the show developed a cult following, and was the focus of its own fan conventions. The concept was rebooted nine years later for the CW network. Though Hawaiian-born actress Maggie Q gave Nikita an exotic new look, reliable old Toronto remained the show's home base. And, we notice, John Badham directed three episodes during its four-season run (2010-13).
Most recently, South Korean writer-director Byung-gil Jung acknowledged Besson’s Nikita as the inspiration for his 2017 thriller Ak Nyeo (The Villainess). His picture had its world premiere at the 70th annual Cannes Film Festival.