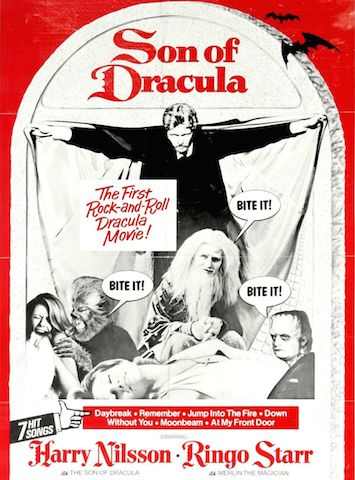 The scattered nature of the concept is evident in the theatrical release poster for director Freddie Francis’s 1974 “rock-and-roll” Son of Dracula.


Between rock and the shock place


My dearest Daughter.
Thank you for insisting that I finally read Dracula. As you most certainly know, today (November 8) is the anniversary of author Bram Stoker’s 1847 birth in the Dublin suburb of Clontarf. There appears to be truth in the claim that the Irish “have a way with the words.” Much to my delight, I found his novel far more readable than I’d expected of a work first published in 1897. The story told in the book is actually quite different from the plot of its authorized stage adaptation, the 1924 stage play produced after Stoker’s widow granted a licence to Irish actor-playwright Hamilton Deane, an old acquaintance of her late husband from his days as a London stage manager. The book is written in the epistolary style, a technique that 18th century novelists used to make their fiction more real. In the case of Dracula, Stoker shares with the reader entries from his characters’ journals, diaries, letters and, in something of a surprise, phonographic recordings. It certainly deserves its reputation as a work of literature, unlike so many of the potboiler pop culture artifacts that have taken the vampire count’s name in vain (vein?).
— Your loving Father.
P.S. Today, I am adding six feature films inspired by Stoker’s work to my Reeling Back archive (with links to each following the Afterword to this dispatch). Hired on the strength of his Hammer horror film credits, director Freddie Francis wasn’t able to bring order to the chaos of Ringo Starr’s idea of a shock-rock mashup, 1974’s Son of Dracula.

SON OF DRACULA. Written by Jay Fairbank (Jennifer Jayne). Music by Paul Buckmaster. Directed by Freddie Francis. Running time: 90 minutes. General entertainment. SON OF DRACULA, BILLED as "the first rock-and-roll Dracula movie," is a bomb with a slow fuse. Sparkling brightly for the first 10 minutes or so, it suddenly crumbles in upon itself.
The film, produced by former rock-band drummer Ringo Starr, is a total disaster, not so much exploding as eroding before the viewer's very eyes. It soon becomes clear that the only man on the set who had any idea what he was doing wasn't in control.
Veteran director Freddie Francis, an Academy Award-winning cinematographer, was little more than a hired hand on this stillborn project. His talents, honed by years of toil in the efficient Hammer horror-film factory, were completely wasted.
An expert at creating strong Gothic atmospherics, the best he could do was to give his latest project a rich, moody look. What it lacks is a sense of purpose or a consistent point of view.
Somebody (and based on past performance I'll assume it was Francis) saw real potential in the story of a vampire born, not of the usual neck bite, but as the result of a natural sexual encounter between the dreaded Count Dracula and a relatively normal woman.
The story then bounces ahead to present time and examines the suffering of the progeny whose human side is coming into conflict with the demonic. Finally he is forced to choose between kingship in the netherworld or mortality. He must become fully one or the other.
There was something there.
Someone, and again I'll assume it was Francis, decided that the film could be rich in allusion to the classic horror films of the past. He opens his film in the year 1880.
The camera, taking the vampire killer's-eye view, enters the Transylvania lair of the evil count. When the vampire appears he does not have the suave look of a Lugosi or a Lee, but the degenerate makeup of Max Schreck, the actor who played in the original screen version of Dracula, the 1922 German silent film Nosferatu.
Once the elder Dracula has been properly dispatched, the film moves ahead to 1980, a year in which the proposed channel tunnel is expected to be in use. A hearse enters it from the European side, reprising author Bram Stoker's original tale in which the vampire is transported to England.
It was going nicely.
But that, apparently, was not what producer Starr wanted. His good friend, singer Harry Nilsson, was appearing in the role of Count Downe (the son of Dracula) and he wanted a musical horror film.
Or perhaps he wanted a comedy horror film. His purpose, like the film's script, is not clear. There are internal clues, though.
The best one is the fact that Starr cast himself in a co-starring role. He plays the robed magician Merlin who, for some unexplained reason, is supposed to be the paterfamilias of the netherworld.
What's more likely is that he really didn't know what he wanted, and played it by tuneless ear. The result is a pitiful pastiche, a film devoid of any meaningful conflict, character, discernible plot, logic or plan.
What's there is regularly interrupted — there is no attempt at plot integration — so that Nilsson can sing one of the movie's "hit" songs. They might even be good. It's hard to tell, though, because the sound post-synchronization is abominable.
Nilsson may be a great musical performer. As an actor he is a washout. Throughout the movie he appears to be suffering, not from pangs of humanity but from an abscessed fang.
Perhaps he was just embarrassed.
He certainly should be. Son of Dracula, his film debut, is a disaster. It's not a film for horror fans, despite Francis's good work in the past. Nor, unfortunately, is it a film for music fans, whose money would be better spent buying another record.
What it is, is another round in the classic screen battle between the good and the god-awful. Good, and the filmgoer, lose.
*    *    *
FANGS FOR THE MEMORY: If you think you’ve heard that old song before, you’re right. The Son of Dracula was the name of a film originally released in 1943.
On that particular outing, the count’s number one son was played by the burly Lon Chaney, Jr. He called himself Count Antony Alucard. (Try spelling it backwards.)
The film was distinguished by its special effects work. It was the first time that horror film fans actually saw Dracula turn into a bat. It was a lot more convincing than his transformation into a rock star.

Afterword: Son of Dracula exists in an alternate timeline where a Channel tunnel exists in 1980. In our world, the “chunnel” linking England and France did not begin construction until 1988. The 50.45 km (31.35 mile) tube opened for rail passenger service on November 14, 1994.
Within our universe, two musical performers with massive name recognition — Harry Nilsson and Ringo Starr — could collaborate on “The First Rock-and-Roll Dracula Movie!” and be ignored. Despite having been produced by Apple Films, the movie-making division of the Beatles' Apple Corps, the 1972 feature sat on the shelf for nearly 18 months before a distribution company would risk putting it into a theatre. When it arrived in Vancouver, in May 1974, movie fans stayed away.
It wasn’t that they resisted the idea of Dracula played for laughs. Just a few years earlier, writer-director Roman Polanski (the man who changed the face of American horror movies with Rosemary’s Baby) had his first popular success parodying the Hammer film formula in The Fearless Vampire Killers (1967). In 1974, director Jim Sharman’s The Rocky Horror Picture Show, the screen adaptation of Richard O’Brien’s stage musical, proved that fans were willing to do the time warp again, and again and again. The same could not be said for any of the “7 Hit Songs” promised on the Son of Dracula poster. Dismissed at the time as a vanity project by a couple of larking popstars, the picture was without charm then, and lacks any cult following today.