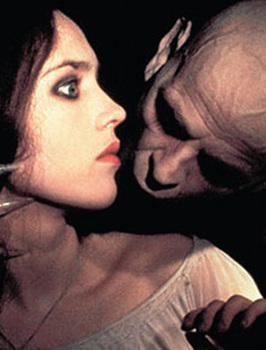 Sympathy for the demon


Damsel is the ultimate stakeholder


In violation of Bram Stoker’s established copyright, the screen’s first Dracula was made in Europe in 1922. A silent classic, F.W. Murnau’s Nosferatu inspired director Werner Herzog to craft his 1979 German-language homage, Nosferatu the Vampyre.

NOSFERATU THE VAMPYRE (Nosferatu: Phantom der Nacht). Music by Popol Vuh and Florian Frickle. Written, produced and directed by Werner Herzog. Running time: 106 minutes. Mature entertainment with the B.C. Classifier’s warning “some frightening scenes.” In German with English subtitles. WHAT’S THE MATTER, BUNKIE?
Is life passing you by? Are you feeling depressed, hung up and run down? When people say “how are you,'' do you answer “worse”?
You've got troubles, right?
Cheer up, my friend  You don't know the meaning of the word until you've sat through a few Werner Herzog films. For years, the Munich-born moviemaker has been searching for the ultimate loser.
Recall: Don Lope de Aguirre, lurching insanely through the South American jungle (in 1972’s Aguirre, the Wrath of God); Bruno Stroszek, staring stupidly through the windshield of his broken-down pickup truck (in 1977’s Stroszek); Kaspar Hauser, the ungainly, empty-headed innocent sent out to work as a freak-show attraction (in 1974’s The Enigma of Kaspar Hauser).
To this gallery, now add Transylvania's vampire count. Here is someone with real troubles, someone who is ugly, unloved and undead.
In Nosferatu the Vampyre (Nosferatu: Phantom der Nacht),  Herzog attempts to make a case for the vampire as victim. In the process, he turns the familiar tale into a dull, listless drama, a drawn-out photoplay that is as visually striking and meaningless as a fever dream.
Much of his text, and the best of his imagery, is borrowed from F. W. Murnau's silent classic, Nosferatu. Klaus Kinski's make-up — blue-grey flesh, sharp, talon-like fingernails, rodent fangs and darting eyes — remains scrupulously faithful to the 1922 version.
Though the look is Murnau, the mood is pure Herzog. Kinski's Dracula is a snuffling whiner. Although he eventually gets around to biting his guests, he tries to talk them to death first.
Bitch, bitch, bitch. Angst-ridden and self-pitying, this is one vampire who bores his victims into a stupor, grabbing them when their eyes finally glaze over. Dracula kvetches.
Herzog departs from Murnau (and Bram Stoker's novel) in several other significant ways. As in the recent [1979] American Dracula remake, the characters and their relationships are rearranged to serve the director’s purpose.
The story opens with Jonathan Harker (Bruno Ganz) accepting a commission from an estate agent named Renfield (Roland Topor). A certain Count Dracula wishes to buy a house in their city, Wismer, Germany.
Harker agrees to go to Dracula's Transylvanian home to seal the deal despite his wife Lucy (Isabelle Adjani) having misgivings. “Don't go,” she says emotionlessly.
“I have a feeling you will be in danger.”
Harker goes, learns about vampires from the local gypsies, comes under Dracula's power, and is helpless to prevent the count's leaving for Wismer.
When he arrives home, he finds the town plague-ridden and overrun with rats. Renfield is raving mad. Dr. Van Helsing (Walter Ladengast), Dracula 's traditional nemesis, is a bumbling bureaucrat, and Lucy is determined to take matters into her own well-manicured hands.
She’s read all about vampires. She knows what must be done. If the menfolk won’t help, "I'll do it myself.”
Herzog’s concession to feminism notwithstanding, his real sympathies are with the vampires. Already the victim of circumstance and his tragic addiction to blood, poor love-starved Dracula will now be undone by a calculating, willful woman.
There was a time, not so long ago, when the whole idea of a horror film was to scare the hell out of the audience. Herzog, one of the auteurs of the new German cinema., would never be so crass or commercial.
Unfortunately, in aspiring to be Art with a Capital A, his Nosferatu the Vampyre ends up being neither fish nor fowl. A forced and shallow exercise in metaphor, languidly acted and flatly directed, it is an utter failure as entertainment.
*    *    *
DRACULA ON TRIAL: Varsity Theatre manager Don Barnes recalls someone telling him that Murnau's Nosferatu had been “banned,” presumably because it was such a frightening film.
The truth is that the 1922 feature was withdrawn after the film's producer was successfully sued for violation of copyright by novelist Bram Stoker's widow. The court ruled that Murnau had used Stoker's story without authorization and ordered that his film he destroyed.
The film exists today thanks to a number of film pirates who defied the court order and kept prints in private collections.

Afterword: Though remembered as an author, Bram Stoker was also a man of the theatre. He honed his writer’s skills working as as a theatre critic for Dublin’s Evening Mail newspaper. Following his marriage in 1878, Stoker and his wife Florence moved to London, where he went to work for the actor-impresario Henry Irving. For 27 years he served as the business manager for Irving’s Lyceum Theatre. During this time, he wrote Dracula and, being aware of the importance of copyright, wrote a stage adaptation of the novel the same year that it was published. Dracula, or The Undead had just one performance (on May 18, 1897) at the Lyceum, but that was enough to establish the author’s rights. That’s also why, 27 years later, the playwright Hamilton Deane had to licence the story from Stoker’s widow before he could produce his own theatrical version of the tale.
It was Deane’s script, revised by John L. Balderston for its 1927 New York premiere, that was the basis of the screenplay of the 1931 feature film. Hungarian-born Bela Lugosi, who’d played the title role in the Broadway production, went on to screen stardom in Hollywood’s original Dracula.
The screen’s first Dracula was Max Schreck, who played Count Orlock in director F. W. Murnau's unauthorized silent, 1922's Nosferatu. It was based on a screenplay that altered the basic characters and storyline in an attempt to avoid legal action. It was just close enough to attract the attention of Stoker’s estate, and the German court agreed that it was a violation of copyright. It ordered that all prints of the picture be destroyed, and that might have been that, but for the fact that one survived in the U.S., out of the judgment’s reach. Murnau went on to become one of the era’s great directors, and his vampire movie is among the first cult classics.
In 2000, American independent director E. Elias Merhige re-imagined the making of Nosferatu in his feature Shadow of the Vampire. In his telling of the tale, the actor Schreck (Willem Dafoe) really is a vampire, one with whom the director Murnau (John Malkovich) strikes a Faustian bargain in order to produce a really scary movie.