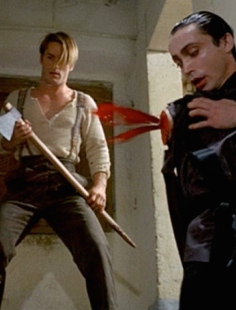 
My dearest Daughter.
Thank you for insisting that I finally read Dracula. As you most certainly know, today (November 8) is the anniversary of author Bram Stoker’s 1847 birth in the Dublin suburb of Clontarf. There appears to be truth in the claim that the Irish “have a way with the words.” Much to my delight, I found his novel far more readable than I’d expected of a work first published in 1897. The story told in the book is actually quite different from the plot of its authorized stage adaptation, the 1924 stage play produced after Stoker’s widow granted a licence to Irish actor-playwright Hamilton Deane, an old acquaintance of her late husband from his days as a London stage manager. The book is written in the epistolary style, a technique that 18th century novelists used to make their fiction more real. In the case of Dracula, Stoker shares with the reader entries from his characters’ journals, diaries, letters and, in something of a surprise, phonographic recordings. It certainly deserves its reputation as a work of literature, unlike so many of the potboiler pop culture artifacts that have taken the vampire count’s name in vain (vein?).
— Your loving Father.
P.S. Today, I am adding six feature films inspired by Stoker’s work to my Reeling Back archive (with links to each following the Afterword to this dispatch). After finishing his Flesh for Frankenstein feature, Andy Warhol Factory-hand Paul Morrissey immediately went to work directing the 1974 comedy Blood for Dracula.

BLOOD FOR DRACULA (also known as Andy Warhol's Dracula). Music by Claudio Gizzi. Written and directed by Paul Morrissey. Running time: 106 minutes. Restricted entertainment  with the B.C. Classifier's warning “brutal violence and some nude sex scenes.” DID YOU HEAR THE ONE about the vampire hunter who saves girls by raping them? He  also beats them up while discussing the class struggle.
A barrel of laughs.
This week [in 1975], we can thank Italy for one of its most cheerful exports since the Mafia. Blood for Dracula (marketed in many markets as Andy Warhol’s Dracula) is billed as a comedy.
The Franco-Italo-U.S. co-production stars Udo Kier and Warhol “Factory” regular Joe Dallesandro. They are the picture’s somnambulistic adversaries, though merely walking upright seems to tax their combined talent to the full.
The feature is the creation of writer-director Paul Morrissey, the Warhol associate who filmed it back-to-back with his 3-D movie Flesh for Frankenstein. Both performers appeared in the previous film (which was also sold as Andy Warhol's Frankenstein). Warhol's only connection to either project seems to be allowing the use of his name in advertising.
His Dracula is supposed to be funny. Too bad, then, that Morrissey decided to introduce those jolly themes characteristic of many current [1975] Italian films: female degradation and class warfare.
His original idea had real comic potential. Dracula (Kier) is wasting away. He needs “wirgin” blood, unavailable in his own neighbourhood, so he travels to Catholic Italy, hoping to find a girl who has been raised "properly."
He finds a noble but poverty-stricken family with four daughters and a surly servant named Mario (Dallesandro). The hero of the piece, Mario is a desultory, mumbling lout who seems to regard his sexual romps with two of the sisters as an extension of his incoherent dialectical materialism.
The only thing he seems to enjoy is the opportunity to physically abuse the two free-loving females while whining about the coming "revolution." Morrissey may have meant this as a parody.
His actors are hardly up to it though, leading to the suspicion that they really are among the undead.
Despite some reasonably solid art direction, there is neither enough imagination nor performing talent to sustain this thematically repugnant film. Blood for Dracula congealed long before it reached the screen.

Afterword: By a coincidence of bookings, Blood for Dracula opened in Vancouver on the same day as director Lina Wertmuller’s Italian-language feature Travolti  da un insolito destine no Nell’ azzurro mare d’agosto (Swept Away by an Unusual Destiny in the Blue Sea of August). I couldn’t help but notice certain similarities between the two movies, and reviewed them both on the same page. My discussion of the Wertmuller picture began “Did you hear the one about the deckhand and the lady? He manages to rape, beat and preach class-struggle politics to her, all at the same time.”
One of the most visible figures in the pop-art movement of the 1960s, Andy Warhol was a Manhattan-based painter and experimental filmmaker. He called his studio space “The Factory,” and it became famous as a gathering place for his friends, an eclectic community of artists, writers and celebrities of various persuasions. Paul Morrissey joined the Warhol community in 1965, and spent the next decade as its in-house filmmaker. Though he directed such features as 1966’s Chelsea Girls, Flesh (1968), Trash (1970) and Heat (1972), all of them included the words Andy Warhol’s in the title. Theirs was a complex, often contentious relationship that has been the subject of a number of articles, essays and books. Given that Morrissey is credited with both the writing and direction of Blood for Dracula, we can’t blame Warhol for the movie’s misogynistic take on Bram Stoker’s creation.
Not every writer who brought Warhol a script received his patronage. In the mid-1960s, a radical feminist named Valerie Solanis asked him to produce her play, titled Up Your Ass. He didn’t, and she felt aggrieved. In response, she imagined a “Society for Cutting Up Men,” setting out its agenda in her 21-page SCUM Manifesto (1967). In 1968, she visited The Factory with a gun, shooting Wahol three times. He survived and, in 1969, she was sentenced to three years in jail. In 1996, Canadian moviemaker Mary (The Notorious Bettie Page) Harron made her directorial debut, telling the Solanis story in I Shot Andy Warhol.