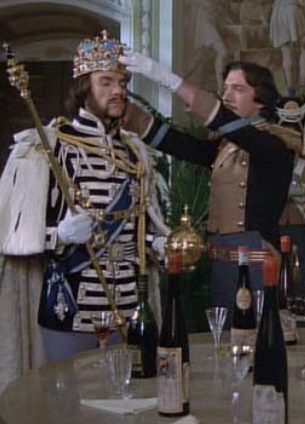 
Mere tongue in cheek is not enough


According to his biographer, Richard Lester is The Man Who “Framed” the Beatles. The title of entertainment writer Andrew Yule’s 1994 book reminds us that its subject made his breakthrough as a feature film director with the musical comedies A Hard Day’s Night (1964) and Help! (1965). The not-so-subtle suggestion is that his early association with the singing group is the best part of the story. While targeting Beatles’ fans may have been a publisher’s ploy to boost sales, it misrepresented Yule’s fact-filled survey of the director’s 37-year career. Lester, born on this day (January 19) in 1932, is better known to cineastes as the man who paired humour with historical insight in his 1973 swashbuckler The Three Musketeers, gave mythic power to mature romance with Robin and Marian (1976)and pioneered on-screen super-heroics in his Superman pictures (1980;1983). Independent, and influential as a result, he chose projects that were always interesting, if not always successful. The three films being added to the Reeling Back archive today (with links to each following the Afterword to this posting) represent Lester coming to grips with the complex cinema zeitgeist of the mid-1970s. Noting that audiences were identifying with antiheroes, Lester attempted to push the limits, offering them Harry Flashman, the “poltroon” at the centre of his 19th-century historical comedy Royal Flash (1975).

ROYAL FLASH. Written by George MacDonald Fraser, based on his 1970 novel. Music by Ken Thorne. Directed by Richard Lester. Running time: 108 minutes. Mature entertainment with the B.C. Classifier's warning: occasional nudity and suggestive language. THE LAST TIME WE saw Lola Montez she was bare-breasted and blonde. As played by Anulka Dziubinska, she was part of Franz Liszt's backstage entourage in Ken Russell's [1975] film Lisztomania.
Now Lola is dark and devious. Florinda Bolkan — last seen in Vittorio De Sica's A Brief Vacation (1973) — has the role, and she is a more important part of the plot in Richard Lester's Royal Flash.
No mere hanger-on, Lester's Lola makes her entrance on the arm of Count Otto von Bismarck (Oliver Reed), remembered today as the man who unified Germany and became its “Iron Chancellor.”
Lola herself made history on a more intimate though no less spectacular scale. Born Maria Gilbert, she was an Irish girl who adopted a Spanish name to pursue a stage career.
She was, in her turn, pursued, and cut a swath across 19th-century Europe with her amorous adventures. Among her lovers were the composer Liszt and the Bavarian monarch Ludwig I, the king who made her a countess.
Her life story was the subject of Lola Montes, a lavishly mounted European film written and directed by Max Ophuls in 1955. Though critically acclaimed as Ophuls's masterpiece, the movie has been little seen, and its enormous cost bankrupt a once-powerful production company.
Royal Flash, unlike Lester's recent Three Musketeers, is no masterpiece. Despite  many peripheral delights, it fails to find a centre of interest as fascinating or as attractive as Lola.
Harry Flashman (Malcolm McDowell) is a singularly mean-minded title character. Cold-blooded and callous, he is decidedly out of place in a high-spirited romantic adventure.
Flashman is a literary rather than an historical figure. Introduced in Thomas Hughes's 1857 Victorian novel, Tom Brown's School Days, Flashman was a bully and a bounder. Ultimately, he received his comeuppance and was forgotten by most readers.
Most, but not all. Among the few to ask themselves “whatever happened to Harry Flashman?" was author George MacDonald Fraser. In 1965, Fraser had the good fortune to "discover" several packets of papers, the Flashman memoirs, and he has been "editing" them for publication ever since.
Flashman is, by his own description, "a dishonest poltroon who takes perverse pride in having attained to an honoured and admired old age in spite of his many vices and entire lack of virtue." A participant in many of the major events of his time, his memoirs provide a fascinating rat's-eye view of Victorian history.
For Fraser, who scripted Lester's The Three Musketeers/The Four Musketeers films, chronicling the Flashman saga has been a remunerative academic exercise. Footnotes abound in the books — there are four titles available so far — and the "editor" is absolutely euphoric over the insights contained in Flashman's historical reportage.
Such scholarly delights are difficult to express in a film script. So Fraser, like Flashman, doesn't even try. Taking the coward's way out, he adapts his own novel as if it were The Three Musketeers all over again. Loosening his grip on Flashman, he turns him into a 19th-century D’Artagnan.
His reworked story begins with Flashy stumbling into a relationship with the Prussian Bismarck and the apparently Spanish Montez. With a kind of lip-smacking malice, the posturing Englishman manages to have the gentleman beaten and the lady disgraced.
Neither of them forget. Some months later, Flashman is summoned to what he thinks will be a romantic tryst and finds himself enmeshed in a Ruritanian intrigue. Because of his resemblance to a Central European prince, Flashman is forced into an identity exchange and a politically advantageous marriage.
Behind the conspiracy? Montez and Bismarck, of course.
Beneath it are unmistakeable borrowings from the much-filmed 1889 novel The Prisoner of Zenda.
In common with Lester's other recent films, Royal Flash is full of cheerfully conceived incidents. There are fine bits of swordplay filmed on some of the most sumptuous locations ever used in a swashbuckler. All are mounted with skill and imagination.
At its centre, though, the film is hollow.
The Musketeers movies worked because their romanticism — though embellished and offered with generous tongue-in-cheek — was real for both the audience and the filmmaker. Flashman, however, is the ultimate anti-romantic. Mere tongue-in-cheek is not enough.
Lester ignores this. His star, Malcolm McDowell, plays Flashman with the ingenuousness of Mick, his 1973 O Lucky Man! character, rather than the calculated evil of Alex, from 1972's  A Clockwork Orange. Lester permits it, and the film collapses around them.
What Flashman's story needed was the cynical wit of a Billy Wilder or, perhaps, the baroque, brooding humour of Orson Welles. Instead, Lester has turned it into a raucous romp. His Royal Flash is slapstick for the Peanuts trade, an off-centre satire with Snoopy cast as The Big Bad Wolf.

Afterword: It wasn’t that I disliked the idea of Harry Flashman. It was the mid-1970s, after all, and everything was up for reassessment and revision. British moviemakers — and the Philadelphia-born Richard Lester had been London-based since 1953 — seemed more willing than their American counterparts to challenge received wisdom. In tune with the times, Scots-born journalist George MacDonald Fraser made his debut as a novelist with a satirical take on the glory days of British imperialism, 1969’s Flashman. The book tickled Lester’s fancy and, fresh from adapting the post-apocalyptic stage play The Bedsitting Room (1969), he purchased the movie rights.
The sale changed Fraser’s life. Although Lester’s fortunes were in decline — his caustic 1969 anti-war feature How I Won the War and The Bedsitting Room were both boxoffice failures — and he wasn’t able to assemble the financing for the Flashman project, the money he paid to Fraser made it possible for the writer to quit his day job and write full time. Between 1970 and 2005 he published 11 more Flashman novels, earning the character a permanent place in 20th-century pop culture. In 1972, Lester hired Fraser to write the screenplay for his feature The Three Musketeers, the beginning of a creative relationship that would include The Four Musketeers, Royal Flash and 1989's The Return of the Musketeers.
His success in the bookstores notwithstanding, Harry Flashman was just not the anti-hero that movie audiences wanted in 1975. Genial insanity, represented by actor Jack Nicholson’s  character Randle McMurphy in director Miloš Forman’s adaptation of Ken Kesey’s One Flew Over the Cuckoo’s Nest, was the direct path to success and, as it turned out, Oscar honours. Forman’s feature earned nine nominations and won five, including best picture.