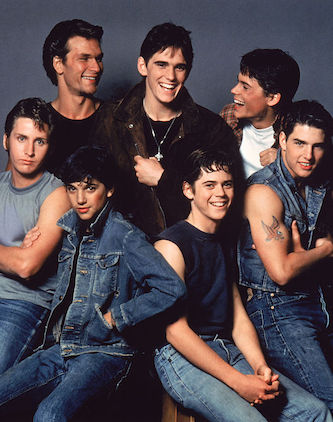 
Giving it all the look of importance


Fifty years later, they’re still talking about Francis Ford Coppola’s smash hit The Godfather. Later this month, the conversation will include The Offer, a six-part Paramount+ miniseries about the making of the 1972 Hollywood classic. Coppola, born on this day (April 7) in 1939, was arguably the most innovative filmmaker of his generation. Certainly worth our attention was the decade during which he parked the Ford. From 1979 (Apocalypse Now) to 1987 (Gardens of Stone) he released seven features, all of them credited to Francis Coppola. “I’m dropping the Ford,” he wrote in an April 1977 memorandum to the staff at his Zoetrope Studios. “This comes from a statement I once heard: ‘Never trust a man who has three names.’” The Coppola that I interviewed two years later was still processing the incredible stress of the five years it took to bring his Vietnam war epic to the screen. “The jungle took over,” he told me. “We all went a little crazy.” In the aftermath of that experience, he turned his attention in a variety of directions, adding to his creative legacy with varying results. Today’s Reeling Back package adds five features to the archive (with links to each following the Afterword to this posting), all of them Francis Coppola features. In 1983, he struck out in an entirely new direction with his adaptation of S.E. Hinton’s young adult novel The Outsiders

THE OUTSIDERS. Written by Kathleen Knutsen Howell, based on the 1967 novel by S.E. Hinton. Music by Carmine Coppola. Directed by Francis Coppola. Running time: 91 minutes. Mature entertainment with the B.C. Classifier's warning: some violence, occasional coarse language and swearing. 1966. IN TULSA, OKLAHOMA, a 16-year-old high school student named Susan Eloise Hinton is working on her first novel, a tale of aimless kids in conflict with the world and one another. She calls it The Outsiders.
In Los Angeles, California, a 27-year-old film student named Francis Ford Coppola is working on his third feature film, a comedy about a confused young man learning to cope with love and life. He calls it You’re a Big Boy Now.
In the years that follow, both Hinton and Coppola find success in their chosen fields; she as a writer of youth-oriented novels, he as a serious filmmaker. Last year, Coppola went on location in Oklahoma to make a movie out of Hinton's first published work.
In The Outsiders, we're given a southwestern teenager's view of life, circa 1966. It is the story of 14-year-old Ponyboy Curtis (C. Thomas Howell), an orphan living with his brothers in a rundown bungalow.
Ponyboy belongs to the denim-wearing, trouble-prone group known as "greasers." His underprivileged companions include one pathologically unhappy kid named Johnny Cade (Ralph Macchio) and the super-cool Dallas Winston (Matt Dillon).
Together, they resent and rumble with the car-driving, chino-wearing society kids that they call "soshes.” Occasionally, they sneak into drive-ins. As the story unfolds, it becomes obvious that while her characters were watching Beach Blanket Bingo and Muscle Beach Party, Susie Hinton was uptown looking at Rebel Without a Cause.
In her story, Dallas is the tragic loner in the James Dean mould. Johnny is the approval-seeking kid-turned-killer à la Sal Mineo. Ponyboy, the author's rather transparent surrogate, is sensitive, right-thinking and heroic, all qualities that will cause trouble for his friends.
Coppola, never one to do things by halves, directs this feeble wish-fulfillment material as if it were a cross between Gone With the Wind and his own Apocalypse Now. He takes an angst-filled youth fantasy and inflates  its simple teen-aged self-absorption into near-religion.
It's all too grand, too pretentious, too soaringly heroic for words. What Hinton wrote was a limited tale about limited people. A high-speed, low-budget director like Roger Corman would have given it its due, and produced a mindlessly energetic picture in the process.
By giving The Outsiders the old epic-art treatment, Coppola proves that he can make damn near anything look important. This time, though, he's built an ornate facade with nothing inside.

Afterword: In my first break with Coppola advocacy, I gave a dismissive review to The Outsiders. At the time, I was outraged at what seemed to be a waste of the auteur’s talent on what I called a “youth-oriented” novel. Today, I realize that I really didn’t know enough about S.E. Hinton and her importance as a pioneer of what’s now known as “young adult” (YA) literature. In a 2019 article called How young adult fiction has transformed over the past 50 years, Angela Haupt tells us that her book, “the first real YA novel,” is still studied in classrooms today. It paved the way for the works of Judy Blume in the mid-70s, Francine Pascal in the mid-80s and J.K. Rowling in the mid-90s.
The books that I’d grown up with in the 1950s were not taken all that seriously. Generally known as “juveniles,” they were mostly toned-down versions of the genre fiction of the day. The Hardy Boys and Nancy Drew series (books I didn’t read) offered teen mysteries, the Lone Ranger (which I did) was a Western. Then there was the very Canadian series, Dale of the Mounted, that followed the career of a young RCMP constable, and the dozen or so science-fiction novels Robert Heinlein produced for younger readers. What they all had in common was a positive outlook because, well, kids needed protection from the harsh realities of adulthood.
Hinton didn’t buy into that, and Coppola saw in her work something that needed attention. I don’t know that I’d like the picture any better today, but I’d sure have made more of its cast, an ensemble of young actors most of whom went on to successful feature film careers.