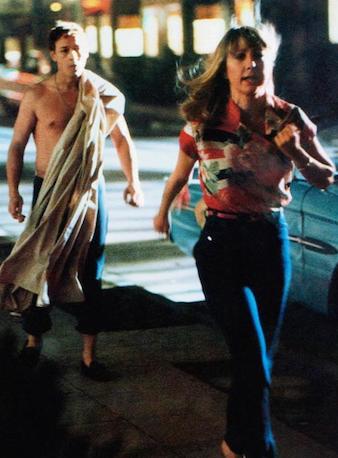 Hank (Frederic Forrest) pursues his girlfriend Franny (Teri Garr) through the streets of Las Vegas in director Francis Coppola’s 1982 musical One from the Heart.


Fifty years later, they’re still talking about Francis Ford Coppola’s smash hit The Godfather. Later this month, the conversation will include The Offer, a six-part Paramount+ miniseries about the making of the 1972 Hollywood classic. Coppola, born on this day (April 7) in 1939, was arguably the most innovative filmmaker of his generation. Certainly worth our attention was the decade during which he parked the Ford. From 1979 (Apocalypse Now) to 1987 (Gardens of Stone) he released seven features, all of them credited to Francis Coppola. “I’m dropping the Ford,” he wrote in an April 1977 memorandum to the staff at his Zoetrope Studios. “This comes from a statement I once heard: ‘Never trust a man who has three names.’” The Coppola that I interviewed two years later was still processing the incredible stress of the five years it took to bring his Vietnam war epic to the screen. “The jungle took over,” he told me. “We all went a little crazy.” In the aftermath of that experience, he turned his attention in a variety of directions, adding to his creative legacy with varying results. Today’s Reeling Back package adds five features to the archive (with links to each following the Afterword to this posting), all of them Francis Coppola features. In 1982, he made a bold attempt to reinvent the classic movie musical with the surreal One from the Heart.

Afterword: About that memorandum mentioned in the introduction to this posting. Written by Coppola, it was distributed within the Zoetrope community on April 30, 1977. Principal photography on Apocalypse Now ended two weeks later, with two more years of post-production still ahead. And, of course the memo was leaked, becoming the subject of  a November 1977 Esquire Magazine article. According to authors Michael Goodwin and Naomi Wise in their 1989 biography On the Edge: The Life and Times of Francis Coppola: “The memo reveals, in chilling detail, Coppola’s tormented and disintegrating mental condition, his feelings of Isolation, paranoia, even worthlessness.” They also noted that it “ended with Coppola’s playful rewrite of Euripides: “Whom God wishes to destroy, he first makes successful in show business,” a line echoed in the title of Jon Lewis's 1995 book Whom God Wishes to Destroy . . . Francis Coppola and the New Hollywood.
Just as the new generation of filmmakers made us see movies differently, a new generation of journalists changed the focus of film coverage. Coppola, previously lauded for his story-telling achievements, became the story when his most ambitious project ran into trouble. In that story, he was portrayed as an unhinged nutbar. The final product, the feature I saw in 1979, suggests that the contemporary reporting had problems of its own. Then came One from the Heart, the subject of the above review. At that time, I was really steamed about “financial reporting (passing) as film criticism,” because I believed it was getting in the way of a good movie getting a fair break. I probably should have known better, given the fact that the same year I took on the movie beat at The Province (1972), a musical number in director Bob Fosse’s Cabaret had said flat out that “money makes the world go around.” Live and learn.