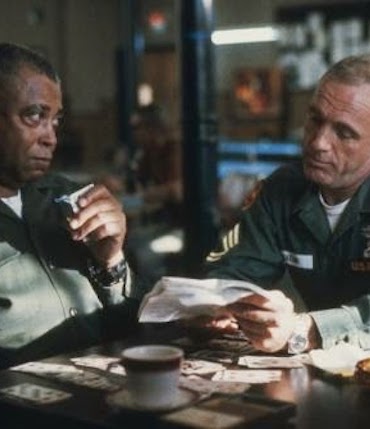 In the burying business


Fifty years later, they’re still talking about Francis Ford Coppola’s smash hit The Godfather. Later this month, the conversation will include The Offer, a six-part Paramount+ miniseries about the making of the 1972 Hollywood classic. Coppola, born on this day (April 7) in 1939, was arguably the most innovative filmmaker of his generation. Certainly worth our attention was the decade during which he parked the Ford. From 1979 (Apocalypse Now) to 1987 (Gardens of Stone) he released seven features, all of them credited to Francis Coppola. “I’m dropping the Ford,” he wrote in an April 1977 memorandum to the staff at his Zoetrope Studios. “This comes from a statement I once heard: ‘Never trust a man who has three names.’” The Coppola that I interviewed two years later was still processing the incredible stress of the five years it took to bring his Vietnam war epic to the screen. “The jungle took over,” he told me. “We all went a little crazy.” In the aftermath of that experience, he turned his attention in a variety of directions, adding to his creative legacy with varying results. Today’s Reeling Back package adds five features to the archive (with links to each following the Afterword to this posting), all of them Francis Coppola features. In 1987, he returned to the subject of war and its aftermath in the military drama Gardens of Stone.

GARDENS OF STONE. Written by Ronald Bass, based on the 1983 novel by Nicholas Proffitt. Music by Carmine Coppola. Co-produced and directed by Francis Coppola. Running time: 110 minutes. Rated Mature with the B.C. Classifier’s warning "some very coarse language.” THE OLD GUARD LIVES FOR the dead. In Vietnam, there's a combat unit that boasts "killing is our business and business is good," Sgt. Clell Hazard (James Caan) tells recruit Jackie Willow (D.B. Sweeney).
Well, "burying is our business," Hazard says grimly. "Our business is better."
The army's official ceremonial regiment, the 3rd U.S. Infantry (The Old Guard) operates out of historic Fort Myer, Va. Its members form the honour guards for funerals at the Arlington National Cemetery.
Though qualified for this special-duty unit, Willow is a young man determined to prove himself in battle. A soldier and the son of a soldier, he didn't join the army to tend its Gardens of Stone.
Director Francis Coppola is no stranger to the 'Nam. One of the first filmmakers to respond seriously to the conflict, he set the standard for Vietnam war movies with his phantasmagorical Apocalypse Now (1979).
Now, in Gardens of Stone, Coppola turns his attention to the home front. The time is 1968 and, in the words of First Sgt. Tom "Smasher" Williams (Dick Anthony Williams): "'Nam makes death a real growth industry."
At the centre of this unfortunate industry are a pair of intelligent, professional sergeants. Both Clell Hazard and his lifelong friend, Sgt.-Maj. "Goody" Nelson (James Earl Jones), believe that the Southeast Asian war is a major mistake.
They're agreed that "there's nothing to win, no way to win it."  Predictably, such opinions don't sit well with their unit commander, Capt. Homer Thomas (Dean Stockwell).
"We're middle management," the officer says. As long as they wear the uniform, men like Hazard have no right to dissenting opinions.
For his own part, Hazard has never viewed the army as a corporation. For him it is his family. Service to the nation is his family's business.
Under Coppola's direction, screenwriter Ronald Bass's adaptation of Nicholas Proffitt's novel is the story of a family in crisis. Like John Ford, Coppola presents his soldiers as members of a clan that seeks, first and foremost, to protect its own.
Like the Corleones, the Mafia family in Coppola's classic Godfather films, the army is involved in a violent business. What troubles Hazard is the fact that, in Vietnam, the family business is being handled badly.
Like Willow, Hazard has no desire to be one of "the nation's toy soldiers." What he wants is a transfer to Fort Benning where he can train men not to bury their comrades, but to survive and come home.
In Apocalypse Now, Coppola vigorously portrayed the insanity of the war. His picture plunged us into the "heart of darkness," both visually and emotionally.
With Gardens of Stone, he pays dramatic tribute to the essential decency that tragedies like Vietnam test and shape. A more intimate and cerebral feature, it offers a succession of familial moments —courtships, dinners, weddings and funerals — to drive home its point.

Afterword: Here’s a fun fact. Apocalypse Now, the greatest of the Vietnam war movies, was also the first full feature film credited to “Francis Coppola.” Gardens of Stone, the director’s return to the subject of that war and its aftermath, was the last. (Yes, he used the two-name credit for his contribution to the1989 anthology New York Stories, but its 33-minute running time was well short of feature length, and so, technically, not a feature film.)
With the release of his next full feature, 1988’s Tucker: The Man and His Dreams, the Ford was back on screen. Additional fun fact: The subject of that film, Preston Thomas Tucker, was a Detroit engineer who set out to re-invent the auto industry. A quixotic comedy-drama based on a true story, it had been a dream project of the Detroit-born Coppola from his film schooldays in the 1960s. When it finally got made, it was oh, so easy to see its tale of a magnificent entrepreneurial failure as a metaphor for the director’s own failure to create a new Hollywood with his independent Zoetrope Studios. At the time, it was thought to be his last film, with the then-49-year-old director fading into retirement.
Then came 1990’s The Godfather: Part III. Seven more pictures followed, none a blockbuster hit. Currently, he is working on a self-financed, $100-million project, a science-fiction romance called Megalopolis. It’s scheduled to begin filming this fall. Francis Ford Coppola turns 83 today (April 7).