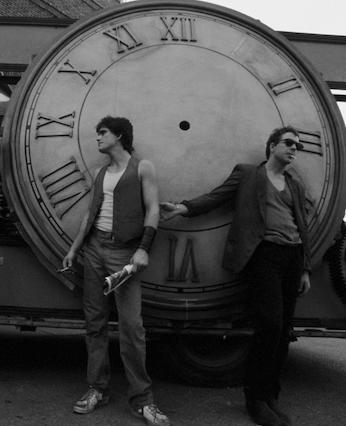 Dimbulb teen on the run


Looking for someplace to burn out


Fifty years later, they’re still talking about Francis Ford Coppola’s smash hit The Godfather. Later this month, the conversation will include The Offer, a six-part Paramount+ miniseries about the making of the 1972 Hollywood classic. Coppola, born on this day (April 7) in 1939, was arguably the most innovative filmmaker of his generation. Certainly worth our attention was the decade during which he parked the Ford. From 1979 (Apocalypse Now) to 1987 (Gardens of Stone) he released seven features, all of them credited to Francis Coppola. “I’m dropping the Ford,” he wrote in an April 1977 memorandum to the staff at his Zoetrope Studios. “This comes from a statement I once heard: ‘Never trust a man who has three names.’” The Coppola that I interviewed two years later was still processing the incredible stress of the five years it took to bring his Vietnam war epic to the screen. “The jungle took over,” he told me. “We all went a little crazy.” In the aftermath of that experience, he turned his attention in a variety of directions, adding to his creative legacy with varying results. Today’s Reeling Back package adds five features to the archive (with links to each following the Afterword to this posting), all of them Francis Coppola features. In 1983, he made a black-and-white movie adapted from S.E. Hinton’s young adult novel Rumble Fish

RUMBLE FISH. Co-written by Susan E. Hinton, based on her 1975 novel. Music by Stewart Copeland. Co-written and directed by Francis Coppola. Running time: 94 minutes. Rated 14 years entertainment with the B.C. Classifier’s warning: frequent very coarse language, some violence, occasional nudity and suggestive scenes. "HEY, HEY, HEY, HEY, hey, hey," says The Motorcycle Boy (Mickey Rourke) in an attempt to communicate with his younger brother Rusty-James (Matt Dillon). "Hey" is the third most frequently used word in the screen adaptation of Susan E. Hinton's novel Rumble Fish.
The second most frequently used word is "man," as in "hey, man," "y'know, man," and "what's happenin', man?" The word heard most frequently can't be quoted here, but it too is a monosyllable, one that has the same initial letter as director Francis Coppola's Christian name.
Coppola, an Oscar winner for his work on the scripts of Patton, The Godfather and The Godfather: Part II, has written better things. In attempting to capture the feeling of a teenager's frustration, he has produced an incoherent, utterly unappealing film.
No, it's worse than that. Rumble Fish, the least commercial picture Coppola has ever done, is a work of such stupefying emptiness that it staggers the imagination.
His overall approach is valid enough. Faced with the task of adapting a novel to the screen, he attempts to enter the mind of its central character and visually reflect what he finds there.
What he should have realized was that Rusty-James's shrivelled consciousness wasn't worth the bother. A teenaged mediocrity, he is a kid who was raised by his alcoholic Old Man (Dennis Hopper), and who is in awe of his more accomplished older brother, a former street-gang leader and mental defective known to one and all as The Motorcycle Boy.
Burrowing into Rusty-James's brain was like returning to film school for Coppola. Unformed and essentially stupid, it is the sort of mind that throws up all of the cliché images beloved by cinema students.
Speeded up clouds show us his restlessness; repeated closeups of billiard balls shot from extreme angles symbolize his self-absorption and macho pretensions; making the movie in black-and-white with occasional splashes of colour emphasizes his monochromatic worldview.
Rusty-James is a teenaged turkey, a dull, resentment-driven dimbulb looking for someplace to burn out. His story, far from being insightful, is just plain boring.
Coppola knows this because he shows this. The only real question is why he chose to waste his time and ours with nonsense like Rumble Fish.

Afterword: I had already noted my disappointment with 1983’s The Outsiders, the director’s first adaptation of an S.E. Hinton novel. Twenty-five weeks later, Rumble Fish arrived in town and prompted the above rant, the least favourable review I’ve ever given to a Coppola film. At the time, critical response to the picture was all over the map. When audiences stayed away in droves, it became a boxoffice disaster.
In retrospect, I might have made more of the picture’s politics. I did note that it was in black and white, but failed to follow up on the fact that, stylistically, it was an homage to German expressionism, the dark film movement that foreshadowed the rise of Nazism in the interwar period. Though not an overtly political filmmaker, Coppola was a political person. In 1980, he’d worked on socially progressive California Governor Jerry Brown’s campaign for the Democratic Party’s presidential nomination. That was the year that U.S. voters chose former California Governor (and corporate spokesmodel) Ronald Reagan to lead the nation.
Was Rumble Fish the cinema artist’s reaction to an historic moment when America was shifting to the right? The press notes that accompanied the film’s release didn’t say, and Coppola was famous for not explaining himself. Following the 1979 New York press screening of Apocalypse Now, I heard him tell a room full of journalists: "My movie is my opinion . . . Whatever you take away, that's what you take away." In 2005, the prestige Criterion Collection added his Rumble Fish film to its list of DVD releases in a package chock-a-block with extras that included audio commentary by the director.