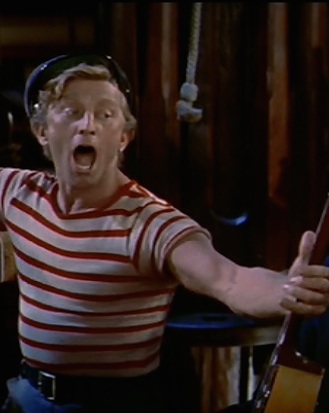 Ned Land (Kirk Douglas) has a Whale of a Tale to tell his crewmates in director Richard Fleischer’s 1954 adaptation of 20,000 Leagues Under the Sea.
THE WHOLE STORY — To see a complete list of the more than 735 items currently posted to Reeling Back, visit the FULL SITE INDEX. To locate specific names or subjects, type your key word(s) into the Search box (located in the right-hand corner of the nameplate above), and click on the magnifying glass (search) symbol. The archive grows almost daily, so feel free to explore.

A drink to the living


Among the journalists working overtime hours during 2016 were the obituary writers. Necrologies dominated the year-end coverage and many a New Year’s Eve gathering included a longer than usual toast to the dead. Personally, I prefer to celebrate the golden agers still with us.

As 2016 drew to close, it seemed like every radio show host had to do a “tribute” to one or more of the pop performers we’d “lost” during the year. Before long, I was really tired of what increasingly felt like lazy, even insincere, programming.

Perhaps because of my own senior citizen status, I’ve come to prefer a quiet moment’s silence to the endless sound of garment rending. In an effort to be positive, I turned my mind to the celebrities still among us.

As it’s become our tradition to have family and friends by for an open house on New Year’s Day, I decided to put together a playlist of “not dead yet” performers. I went ahead and downloaded some of their songs from my ludicrously large CD collection, and created an iPod program to provide a joyful noise in the background during the party.

The idea was to celebrate the New Year and take inspiration for those with whom we’ll share its many surprises. The result was a package of 39 songs featuring 45 talented performers, all of whom were alive as of January 1, 2017. Included are:

And, though she’s not yet a senior, I could not put together a New Year’s playlist that didn’t include Michelle Pfeiffer, 58, together with her interpretation of Makin’ Whoopee from 1989’s The Fabulous Baker Boys. She turns the 1928 show tune into a genuine anthem for the life force.

With so much else going on, working on Reeling Back has been on the back burner. The 10 most recent additions to the archive are:

THE HUDSUCKER PROXY — The ever-individual Coen brothers, Joel and Ethan, went for the brass with their take on the all-American corporate comedy. Set in late 1958, it features a great performance from Jennifer Jason Leigh and a phantasmagoric New Year’s Eve finale. (Posted December 31)

I AM CURIOUS (YELLOW) — A filmmaker who set out to question the givens of Swedish politics with a new kind of activist entertainment, Vilgot Sjöman found himself in the midst of an international censorship crisis when his 1967 feature was banned in the United States. (Posted December 2)

AILEEN WUORNOS — THE SELLING OF A SERIAL KILLER — Courting controversy, British broadcast documentarist Nick Bloomfield pioneered a “self-reflexive” style in his 1992 examination of the popular response to the story of a female killer in Florida convicted of murdering five men. (Posted November 30)

GREMLINS 2: THE NEW BATCH — An artist with a deep appreciation of the Looney Tunes legacy, director Joe Dante anticipated the promise and confusion of our anarchic times in the sequel to his 1984 hit comedy, a 1990 corporate-media fantasy that features a Donald Trump-like villain. (Posted  November 28)

THE BETSY — Big, bold novelist Harold Robbins considered this 1978 feature the best adaptation of any of his works. Cast with such classy actors as Laurence Olivier and Robert Duvall, his story of a Detroit automotive dynasty was directed by Canadian Daniel Petrie. (Posted November 26)

DANIEL PETRIE interview — In 1978, Nova Scotia-born director Daniel Petrie sat down with me in Vancouver to discuss his Glace Bay roots, his New York acting debut and his big-screen adaptation of Harold Robbins’s The Betsy. (Posted November 26)

FESTIVAL OF CLAYMATION — Before the maturation of computer-generated imagery (CGI), animation was a hands-on art form that included among its masters Will Vinton. The Oregon artist packaged the best of his stop-motion work into this 1987 compendium feature. (Posted November 17)