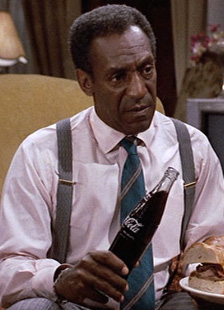 His service not so secret


Little fun to be found in spycraft satire


History’s file on Bill Cosby, born on this day (July 12) in 1937, contains before and after photos. The "after" image is a mug shot, representing the fact that he is currently serving a prison sentence of up to ten years for “aggravated indecent assault.” His 2018 conviction, called a watershed moment for the #MeToo movement, represents justice for one among some 60 women who came forth to accuse the entertainer of sexual abuse. Forever in its shadow will be our "before" picture of Cosby, the successful stand-up comic, actor, author and positive inspiration to black youth. As the first African-American to co-star on a prime-time TV series — opposite Robert Culp in 1965’s I Spy — he brought about change. He became beloved for his work promoting family values on The Cosby Show (1984-92), where he played Cliff Huxtable, rated “greatest TV dad” in a TV Guide poll. A prominent advocate for education, he held about 70 honorary degrees prior to his fall from grace. And, of course, he was a movie star, often working with his friend Sidney Poitier. The five films being added today to the Reeling Back archive (with links to each following the Afterword to this posting) include director Paul Weiland’s evocation of Cosby’s I Spy days, the 1987 espionage comedy Leonard Part 6.

LEONARD PART 6. Written by Jonathan Reynolds. Music by  Elmer Bernstein. Directed by Paul Weiland. Running time: 85 minutes. Rated Mature entertainment. BILL COSBY WOULDN’T LIE to us. The man is an all-American paragon, honest, upright and honourable.
Not your ordinary multi-millionaire entertainer, Cosby counts as one of the good guys. I've always liked him, and I believe that he really uses those products that he endorses on TV.
Imagine, then, my shock at seeing Leonard Part 6, a film produced by, based on a story by, and starring Bill Cosby. Here, condensed into 85 excruciatingly unfunny minutes, is clinical proof that the ingestion of excessive amounts of cola-flavoured soft drinks and instant dessert mix causes mental fatigue and turns your brain into industrial waste.
A hopelessly lame and morally callous movie, Leonard Part 6 stars Cosby as Leonard Parker, a former CIA agent living in retirement in San Francisco. He's called back into service when a master criminal begins the wholesale elimination of company operatives.
Not funny? What if Parker were fabulously wealthy, a debonair restaurateur with an English valet named Frayn (Tom Courtenay)?
What if he'd quit the company to please his wife, Allison (Pat Colbert)? What if she left him anyway, and the lovesick Leonard has been trying to win her back for seven years?
Still not funny? What if the villain is a woman named Medusa Johnson (Gloria Foster), a fanatic vegetarian and animal liberationist who is turning the animal kingdom against mankind?
What if the estranged couple’s 20-year-old daughter Joan (Victoria Rowell) is a would-be actress who announces that she is in love with her 66-year-old director (Moses Gunn)?
What does it take to make you people laugh?
All right. So these aren't funny ideas. Maybe Cosby was nostalgic for his I Spy days, and thought we'd like to see him do a James Bond parody.
Too bad, Bill, but this collection of stale stupid pet tricks really looks more like reject footage from the old Batman television series.
Too bad for Coca-Cola's subsidiary, Columbia Pictures. It sank $27 million into this non-Classic, three times the budget of last year's [1987] best picture, RoboCop, and more than half of what it spent on last year's worst, Ishtar.
(On the plus side, first-time feature director Paul Weiland knows how to keep the product's name in focus during its frequent appearances. But then, he did get his start in TV commercials.)
A comedy with neither a sense of proportion not a sense humour, Leonard Part 6 made me finally appreciate the subtlety and sophisticated wit of Fox-TV’s The New Adventures of Beans Baxter.

Afterword: Airing for three seasons (1965-1968), NBC-TV’s I Spy was one among many secret agent shows inspired by the success of the James Bond movie series. Cold war covert caper fans could choose among The Man from U.N.C.L.E., Mission: Impossible and Get Smart, or a number of British imports that included The Avengers, The Saint, Danger Man and The Prisoner. What distinguished I Spy was Bill Cosby, making screen history as the first black actor to co-star in an American network drama. His partner in international espionage was played by Robert Culp, and they were portrayed as a working team and personal buddies. Before production began, it was agreed that race would never be an issue for the undercover heroes.
Leonard Part 6? The manager of the movie house where the picture was preview-screened told me that the title had his customers confused. None of them could remember the first five films in the series, he said. That made them a little uneasy about committing to the new movie.
Released in time for Christmas 1987 in the U.S., the comedy's title played upon the franchise fatigue a lot of filmgoers were feeling. Among the titles that went by in 1987 were such sequels as American Ninja 2; Beverly Hills Cop II; Creepshow 2; House II; Prom Night II; and Revenge of the Nerds II. Also available were the series continuations Nightmare on Elm Street 3; Death Wish 4; Police Academy 4; Jaws 4; and Superman IV.
Because Leonard Part 6 was a boxoffice bomb in its home market, it didn’t arrive in Vancouver until 1988. That was the year we would see the sequels Arthur 2; Caddyshack II; Critters 2; Crocodile Dundee II; Hellraiser II; Iron Eagle II; Missing in Action II; Short Circuit 2; such franchise fare as Poltergeist III; Rambo III; Nightmare on Elm Street 4; Police Academy 5; and Friday the 13th Part VII. In case you were wondering, all those fine films were on offer between the release of 1985’s Rocky IV and Rocky V (1990) and of Star Trek IV (1986) and Star Trek V (1989).