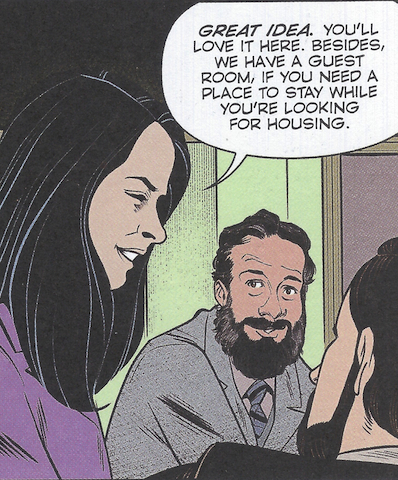 In a panel from the English-language edition of Laurent Queyssi’s Philip K. Dick: A Comics Biography, Susan Walsh offers PKD temporary lodgings following 1972's Vancouver Science Fiction Convention. (Art by Mauro Marchesi)
THE WHOLE STORY — To see a complete list of the 1,001 items currently posted to Reeling Back, visit the FULL SITE INDEX. To locate specific names or subjects, type your key word(s) into the Search box (located in the right-hand corner of the nameplate above), and click on the magnifying glass (search) symbol. The archive grows almost daily, so feel free to explore.


On October 4, 2013, the day that Reeling Back went live on the Internet, I thought I knew where all this was going. Five years, four months and 12 days later, I’m older, perhaps wiser and certainly more aware of the “innumerable confusion” of our times that Marshall McLuhan first noted in 1964.

I’d like to say that it’s all gone according to plan (and that our cameo appearance in the recently published comic book biography of Philip K. Dick was one more part of it). Truth to tell, it’s been more a matter of Dunn’s law: “Careful planning is no substitute for dumb luck.”

In my first blog entry, I described Reeling Back as “the attempt of an old print journalist to lurch into the 21st century.” The idea for the website was fairly straightforward. It was to be an archive of my previously published newspaper work, a selection of reviews, features and columns salvaged from the landfill of time.

The format recalls the look of a pre-Internet newspaper page, with each posting set out in one of 14 sections. The site’s motto reads “Everything Old Is News Again,” and I’ve attempted to key each item to “today’s date”. An afterword follows, in which I try to provide some new ideas or information relevant to the old story.

Full disclosure: The old print journalist had an ulterior motive. Aware that senior citizens are prone to various impairments both physical and mental, I undertook the project as an exercise to keep the old brain cells going for as long as possible. Creating a posting is part of an elaborate game to keep the mental musculature healthy. If other people find Reeling Back useful or entertaining, that’s a happy bonus for all concerned.

Since launching myself into cyberspace, I’ve experienced a decrease in my real-world mobility, as well as a few other medical issues that set back my plan to celebrate the website’s 1,000th posting before its fifth anniversary. But, hey, numbers are just numbers and, as Rupert Giles once observed: “It’s all about the journey, isn’t it?”

The journey thus far has included revisiting February 18, 1972, the day that science-fiction writer Philip K. Dick accepted our offer of temporary accommodation. In December 2016, Sue and I played host to a BBC Radio 4 team who recorded a half-hour documentary about our time with Phil. In January 2017, I was contacted by a French graphic novelist, Laurent Queyssi, who was preparing a biography of Dick that included his time with us in Vancouver.

One year later, Phil: Une vie de Philip K. Dick (2018) was published in Paris. Last month, an English-language edition was released, and we picked up a copy from our local comic shop. Earlier this week, I hit the save key on the 1,000th Reeling Back posting. Much like the original encounter with Dick, it all seems like the product of dumb luck.

Today, as more stuff just happens, I plan to tell that hospitable woman pictured above that I love her, then maybe do a little more work on the website. So far in February the postings have included:

THE DUCHESS AND THE DIRTWATER FOX — The second of three features that director Melvin Frank made with George Segal, this derivative 1976 frontier comedy pairs the actor with a scene-stealing Goldie Hawn. (February 13)

SCANNERS — Heads explode in this classic 1981 shock thriller, Canadian director David Cronenberg’s meditation on the subject of alienation and mental mutation in our urbanized world. (February 12)

GORILLAS IN THE MIST — Sigourney Weaver captures the weird wonderfulness of primatologist Dian Fossey in this 1988 biographical drama from director Michael Apted. (February 12)

INVADERS FROM MARS — Returning to the days of menacing movie aliens, director Tobe Hooper's 1986 sci-fi thriller is a scary remake of the 1953 feature that, he once said, “burned holes in my brain”. (February 12)

CORDÉLIA — Louise Portal is utterly compelling in the title role, playing a young widow charged with murdering her husband in 19th-century Québec. Based on a true story, it was made in 1980 by director Jean Beaudin. (February 6)

THE LAST TEMPEST — Director Li Han-hsiang reunited the cast of his 1975 historical drama The Empress Dowager for this 1976 sequel, a tale of love and intrigue in the Imperial Chinese court circa 1898. (February 5)