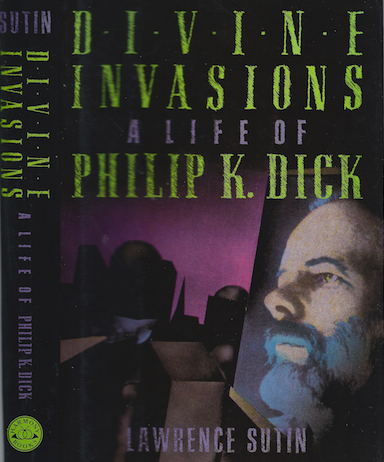 Lawrence Sutin included his interview with Michael and Susan Walsh in his 1989 biography, Divine Invasions: A Life of Philip K. Dick.
THE WHOLE STORY — To see a complete list of the more than 750 items currently posted to Reeling Back, visit the FULL SITE INDEX. To locate specific names or subjects, type your key word(s) into the Search box (located in the right-hand corner of the nameplate above), and click on the magnifying glass (search) symbol. The archive grows almost daily, so feel free to explore.


For more than 40 years, artists, authors and pop culture historians have been inspired by the compelling dystopian visions of science-fiction icon Philip K. Dick. Some of his biographers go so far as to include my momentary walk-on role in the tumultuous tale that was his life.

It’s taken some getting used to. A year ago, if you’d asked me what I’d be remembered for, playing host to science-fiction writer Philip Kindred Dick would not have been my first choice.

And yet here we are.

In mid-December, British broadcaster Andrew McGibbon arrived in Vancouver to gently remind me that I’ve become a footnote in PKD’s story, a fine-print entry in that author’s history. Together with his producer, Louise Morris, McGibbon interviewed Susan and me about the time Dick spent in Vancouver in 1972. (I wrote about their visit a few days later in a posting called Radio 4’s Dick Doc Duo.)

On Monday, February 13, I Was Philip K Dick’s Reluctant Host went to air on BBC Radio 4. The next day, I started receiving emails from people who’d heard the show and wanted to get in touch.

The Brits, with their worldwide audience, were sharing a tale that has been out there for many years. It began in the late 1980s, when Susan and I were interviewed by Lawrence Sutin. He was doing research for Divine Invasions: A Life of Philip K. Dick, published in 1989. He quotes us on pages 190-192.

Shortly afterward, we were contacted by Ann Rubinstein Dick, the third of Phil’s five wives. She was preparing a book on her late husband, and asked us to tell our story once again. Published in 1995, The Search for Philip K. Dick, 1928-1982 includes it on pages 156-162.

The new century brought with it new interest. In 2006, Argentinian filmmaker Dario Schvarzstein asked to interview us on camera for a feature documentary he was producing. In November, he emailed his regrets that he couldn’t afford the Vancouver visit, so we are not among those seen in the 2007 TV movie The Penultimate Truth on Philip K. Dick (one of three video docs on Dick released that year).

In 2014, Vancouver uber-fan R. Graeme Cameron recycled a 1994 interview that I’d done for his fanzine into an article for the online edition of Amazing Stories magazine. Cameron’s piece, Mad Flight of a Manic Phoenix, or: Philip K. Dick in Vancouver (1972), launched the story into cyberspace, where it is referenced in Dick’s Wikipedia entry.

On January 6th, I opened an email from Laurent Queyssi, a French author and graphic novelist. Together with the italian artist Mauro Marchesi, he is working on an illustrated PKD biography and, yes, the story’s Vancouver moment includes Susan and me. Scheduled for release this year, the book will be simultaneously published as a French-language bande dessinée and an English-language graphic novel.

So, I’m about to make my debut as a comic book character, fulfilling a life-long ambition that I never realized I had. I guess life as a footnote has its own rewards.

Even so, if I have any choice in the matter, I’d rather be remembered for my own writing. That means I’ll continue this website, posting my journalistic ephemera to Reeling Back. The most recent additions to the archive are:

THE LAND BEFORE TIME — In an attempt to challenge Disney’s position as the No. 1 cartoon maker, George Lucas joined with Steven Spielberg to “present” animation director Don Bluth’s 1988 tale of young dinosaurs on a quest for earth’s last safe place. (Posted February 24)

FIRES OF KUWAIT — Veteran IMAX director David Douglas joined the real-life hellfighters to produce this 1992 documentary, a frontline account of the battle to extinguish the 600-plus oil wells set ablaze by retreating Iraqi forces at the end of the 1991 Gulf War. (Posted February 23)

PALAIS ROYALE — Kim Cattrall, Kim Coates and Matt Craven portray a trio of Torontonians walking on the wild side in director Martin Lavut’s neo-noir romance. Made in 1989, it recalls a legendary lakeside dancehall circa 1959. (Posted February 21)

DENNIS THE MENACE — Though based on a benign comic strip from the 1950s, director Nick Castle’s 1993 family comedy has more in common with the mean-minded Home Alone, the 1990 feature created by its writer/producer John Hughes. Walter Matthau plays the long-suffering Mr. Wilson. (Posted February 10)

HUSBANDS AND WIVES — A lame attempt at mock documentary, writer-director Woody Allen’s 1992 domestic drama was rushed into theatres to take advantage of the tabloid headlines that accompanied the moviemaker’s breakup with his long-time leading lady, Mia Farrow. (Posted February 9)

A MARRIED COUPLE — In the 1960s, pioneering Canadian director Allan King set out to make a new kind of documentary. In the process, he turned cinéma vérité into “actuality drama,” and set the stage for what has become the Reality TV genre with this 1969 look at a troubled marriage. (Posted February 9)

ALLAN KING — Returning to his University of B.C. alma mater in 1970, the innovative director talked about the evolving art of the documentary and his 1969 film A Married Couple. In our subsequent interview, he revealed plans for a controversial new project. (Posted February 9)

MONTY PYTHON'S THE MEANING OF LIFE — In its fourth and final theatrical feature, the British comic collective returned to its broadcasting format, tossing together this 1983 anthology film. A collection of loosely-themed skits, the resulting package emphasized outrage and vulgarity rather than wit. (Posted February 1)

THE SUPREME KID — Vancouver and its surrounding regions are less than postcard perfect in this unsentimental 1976 road picture written and directed by Peter Bryant. The film captures an important moment in the development of both the city and B.C.’s domestic movie industry. (Posted January 30)

TAMPOPO — A Japanese cinema classic celebrating life’s positive sensations, this 1985 feature from writer-director Jûzô Itami is a delicious film about food that also manages to be a multi-course sendup of movie genres and social mores. (Posted January 26)

ROCKY — Actor-writer Sylvester Stallone made his breakthrough to stardom (and founded a film franchise), while director John Avildson won an Oscar for this 1976 tale of a big, dumb boxer with a good heart. Rocky makes his mark by going the distance in a promotional match with the reigning champ. (Posted January 20)

TALL TALE: THE UNBELIEVABLE ADVENTURES OF PECOS BILL — Subtly subversive, director Jeremiah Chechik’s 1995 film brings together the legends of the Old West’s working men — Pecos Bill, Paul Bunyan and John Henry — in a family comedy that has much to say about the social issues of its day. Patrick Swayze, Oliver Platt and Roger Brown play the heroic trio. (Posted January 12)