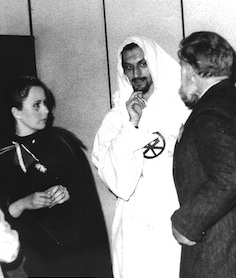 Second Vancouver Science Fiction Convention chairman Daniel Say (centre) looks on as Guest of Honour Philip K. Dick chats with his soon-to-be hostess Susan Walsh during the 1972 event’s February 18 masquerade ball.
THE WHOLE STORY — To see a complete list of the more than 730 items currently posted to Reeling Back, visit the FULL SITE INDEX. To locate specific names or subjects, type your key word(s) into the Search box (located in the right-hand corner of the nameplate above), and click on the magnifying glass (search) symbol. The archive grows almost daily, so feel free to explore.


’Tis the season to be interviewed. Proving that no good deed goes unpunished, on Monday a pair of British broadcasters interrogated me for more than three hours. They were determined to get at the truth behind those long-ago weeks in 1972 when I Was Philip K. Dick’s Host.

It was Monday, December 19, 2016. The whirlwind that I’ll call the Rad4 Dick Doc Duo — the British broadcasting team of Andrew McGibbon and his producer Louise Morris — arrived in Vancouver just before 1 p.m.

They arrived aboard WestJet’s Flight 1701, a number that brought to mind a certain pop culture starship. They were in town for just five hours, one of them spent driving to and from YVR in our family car, a Toyota Matrix.

The science-fiction connections were oddly appropriate, given the reason for their visit. McGibbon is the creator of a BBC Radio Four documentary series called “I Was . . .” in which he interviews ordinary people who’ve had encounters with "great artists". He is preparing a show on writer Philip K. Dick and, during his research, he’d discovered that I was PKD’s host for maybe two weeks in 1972.

On June 28, I'd received an email from Ms Morris detailing the show’s concept, and asking if I’d be interested in doing an interview. Several more emails and two transAtlantic telephone calls later, we were all together in the dining room where the late, great Dick had broken bread with us during a particularly turbulent time in his life.

During an intense four-hour session, Susan and I did our best to make sense of our 44-year-old memories of his 10 weeks in Vancouver.

We understood going in that the subject of the show is Phil. Our recollections will be aural set decoration, the contemporary context for McGibbon’s own word portrait of “great artist” Dick. In the coming weeks, McGibbon and Morris will distill our responses to their questions down to the approximately nine minutes of material needed to make their case: PKD was a major force in the development of the science-fiction genre whose dark vision of the future is coming true all around us.

That, of course, is just the reality of broadcast journalism. For our parts, Sue and I were a bit bemused by the attention, and actually enjoyed what Wesley Wyndam-Pryce once called a “death march down memory lane.”

For their part, the Radio 4 doc duo paid us the compliment of making a round trip of about 21,000 km (13,000 miles) to record our story. Put another way, they spent some 26 hours in the air for a show that will run about 28 minutes on the air.

I said it was intense — Vancouver was digging out from a rare heavy snowfall, making transport to and from the airport an adventure — but it was also intensely frustrating. Both McGibbon and Morris are fascinating people in their own right, each with a fund of insight and experiences of the sort that make for good conversation.

Together with the sort of people that I love to sit and talk with, we were come together in the season of peace and good will. But, because this whirlwind involved a deadline, there was no time for anything like leisurely conversation. And then we were done, our new almost-friends on their way back to L.A.

For now, Susan and I will settle back into our seasonal routine. According to McGibbon, I Was Philip K. Dick’s Host is tentatively scheduled for a mid-February broadcast. We look forward to hearing it on the Internet.

With so much going on in our daily lives, work on Reeling Back has been on the back burner. The most recent additions to the archive are:

I AM CURIOUS (YELLOW) — A filmmaker who set out to question the givens of Swedish politics with a new kind of activist entertainment, Vilgot Sjöman found himself in the midst of an international censorship crisis when his 1967 feature was banned in the United States. (Posted December 2)

AILEEN WUORNOS — THE SELLING OF A SERIAL KILLER — Courting controversy, British broadcast documentrist Nick Bloomfield pioneered a “self-reflexive” style in his 1992 examination of the social response to the story of a female killer in Florida convicted of murdering five men. (Posted November 30)

GREMLINS 2: THE NEW BATCH — An artist with a deep appreciation of the Looney Tunes legacy, director Joe Dante anticipated the promise and confusion of our anarchic times in the sequel to his 1984 hit comedy, a 1990 corporate-media fantasy that features a Donald Trump-like villain. (Posted  November 28)

THE BETSY — Big, bold novelist Harold Robbins considered this 1978 feature the best adaptation of any of his works. Cast with such classy actors as Laurence Olivier and Robert Duvall, his story of a Detroit automotive dynasty was directed by Canadian Daniel Petrie. (Posted November 26)

DANIEL PETRIE interview — In 1978, Nova Scotia-born director Daniel Petrie sat down with me in Vancouver to discuss his Glace Bay roots, his New York acting debut and his big-screen adaptation of Harold Robbins’s The Betsy. (Posted November 26)

FESTIVAL OF CLAYMATION — Before the maturation of computer-generated imagery (CGI), animation was a hands-on art form that included among its masters Will Vinton. The Oregonian artist packaged the best of his stop-motion work into this 1987 compendium feature. (Posted November 17)

CRAZY MOON — Actor Kiefer Sutherland’s Hollywood career was already well on track when this 1985 Canadian feature was finally released. Directed by Allan Eastman, it is his attempt to put a Montreal spin on traditional screwball comedy conventions. (Posted November 8)