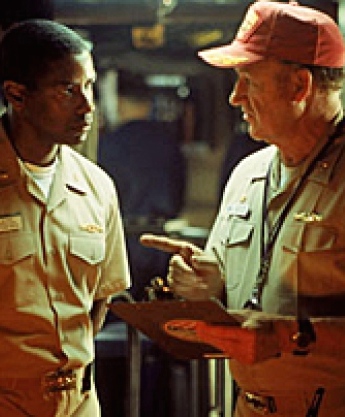 
Debating the issue beneath the waves


Today (April 11) is Submarine Day, the annual celebration of undersea naval operations. So is March 17. The earlier date is marked in the United Kingdom, which lays claim to the first such vessel. Built in 1620 by Dutch engineer Cornelis Drebbel for James I, it was successfully tested in the River Thames by the Royal Navy. Not to be outdone, American subaquatic aficionados pay tribute to the April afternoon in 1900 that the the U.S. navy established its modern Submarine Force with the acquisition of the USS Holland (named for its builder, John Philip Holland). First called “the silent service” in 1929, the intense, scary world of submariners has exerted a particular fascination for writers and filmmakers ever since Jules Verne introduced us to Captain Nemo’s Nautilus in his 1820 novel Twenty Thousand Leagues Under the Sea. A cinema subgenre since the First World War, submarine movies deal in claustrophobic tensions and the primal fear of death by drowning. Over the years just about every major Hollywood male star has taken his turn squinting into a periscope. Today, Reeling Back adds four titles to its U-boat archive (with links to them all following the Afterword to this posting). Gene Hackman and Denzel Washington are the stars struggling for the missile-launching authority aboard the USS Alabama in director Tony Scott’s 1995 political thriller Crimson Tide.

CRIMSON TIDE. Written by Michael Schiffer. Based on a story by Michael Schiffer and Richard P. Henrick. Music by Hans Zimmer. Directed by Tony Scott. Running time: 116 minutes. Rated 14 Years Limited Admission with the B.C. Classifier’s warning "some violence and very coarse language.” RED ALERT!
“Little ducks, there's trouble in Russia . . ."
Listen up,   this  is  the captain  speaking.
". . . so they called us. We're going over there with the most lethal killing machine ever devised . . .”
They are the president and joint chiefs of staff of the United States. Us is Captain Francis "Frank" Ramsey (Gene Hackman) and the crew of the Starship Enterprise . . .
Oops, sorry. What I meant to say was the USS Alabama.
A Trident 1 C-4 configured Ohio class submarine, it's a multi-billion-dollar weapons system designed to make good on the old Cold War threat of mutually assured destruction (MAD).
Now hear  this! Romulan war bird decloaking off the port bow!
Nooo, that's not right.
We're cruising 300 miles off Kamchatka, the Russian peninsula in the north Pacific, so it has to be a Russian hunter sub. He's engaged his weapons, so it's actually a Russian rebel sub, one of four loyal to Vladimir Radchenko (Daniel von Bargen), the rabid nationalist who's brought the Federation to the brink of war.
Wow! Crimson Tide is the best Star Trek feature that Paramount Pictures never made. Though While You Were Sleeping counts as the season’s sweetest date movie, director Tony (Top Gun) Scott's undersea action picture is the one for a night out with the boys.
Like Sleeping, it is a flat-out, full-throttle formula feature with the whole story on view in its advertising spots. As in Sleeping, the outcome is never in doubt.
The time is late October, 1995. Dispatched to the Neutral Zone . . . sorry, the North Pacific . . .  the Alabama represents the last superpower's message to the Russian insurgents.
Or, as the Patton-like Captain Ramsey puts it, "our friends in the Pentagon are setting us up for a potential pre-emptive strike."
Got that right, sir.
On November 1, as it's preparing to launch its missiles, the Alabama comes under attack. It is during this local battle that a second, garbled message arrives, a message that may or may not be orders to abort the launch.
Their next move is a subject of conflict between Ramsey and his executive officer, personable Lieutenant Commander Ron Hunter (Denzel Washington).
Can you say "Caine Mutiny?"
Michael (Lean on Me) Schiffer's didactic screenplay sets up the obvious contrast between a captain who quotes von Clausewitz, and demands absolute loyalty to the commanding officer, and the X-O who understands von Clausewitz, and inspires loyalty in his men by talking to them in the language of the popular culture.
The Star Trek homage is made explicit when, after taking over the ship, Hunter explains the situation to radioman Russell Vossler (Lillo Brancato, Jr.) with a direct reference to the TV show.
"This is Captain Kirk. I need warp speed on that radio."
Though far from radical, Crimson Tide is neither the Technicolor recruiting poster we've come to expect from the Disney defence plant, nor is it the endorsement for ever more military spending that filmmakers traditionally exchange for Pentagon co-operation.
A toy movie with some panache, it features a fine, sweaty performance from actor Hackman as the mildly mad captain. It offers a timely restatement of an old truism: "In the nuclear world, the true enemy is war itself."

Afterword: Crimson Tide, with its total lack of respect for cold war values, was the last of four pictures the Disney organization released in the 1990s that could only be described as subversive. I first noticed the studio's reliably conformist filmmakers going off message with director Kenny Ortega’s Newsies, a 1992 musical with a pro-union theme. It was followed by Thomas Carter’s Swing Kids (1993), a tale of teen rebellion in Nazi Germany with a blunt anti-authority subtext. Finally, in March 1995, there was Jeremiah Chechik’s Tall Tale: The Unbelievable Adventures of Pecos Bill, in which a trio of American folk heroes return to help an early 20th-century community battle a rapacious corporate executive. I used to joke that there must be a rogue executive in the Disney head office green-lighting these politically-charged projects. If so, they caught him, because nothing to equal them has been seen since. And, yes, I realize that there has be much discussion of new directions following the media corporation’s acquisition of Marvel Entertainment (2009) and Lucasfilm Ltd. (2012), and of progressive ideas finding their way into its pop culture product. Currently, the talk focuses on the “messages” of empowerment contained in director Ryan Cooper’s 2018 Black Panther, a superhero movie. I’m still thinking about that one.