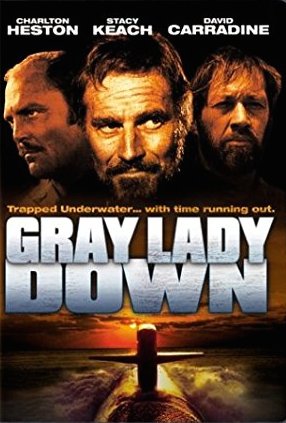 Along with Charlton Heston and Stacy Keatch, David Carradine is featured on the poster for director David Greene’s 1978 submarine thriller Gray Lady Down.

Sub rescue by the book


Today (April 11) is Submarine Day, the annual celebration of undersea naval operations. So is March 17. The earlier date is marked in the United Kingdom, which lays claim to the first such vessel. Built in 1620 by Dutch engineer Cornelis Drebbel for James I, it was successfully tested in the River Thames by the Royal Navy. Not to be outdone, American subaquatic aficionados pay tribute to the April afternoon in 1900 that the the U.S. navy established its modern Submarine Force with the acquisition of the USS Holland (named for its builder, John Philip Holland). First called “the silent service” in 1929, the intense, scary world of submariners has exerted a particular fascination for writers and filmmakers ever since Jules Verne introduced us to Captain Nemo’s Nautilus in his 1820 novel Twenty Thousand Leagues Under the Sea. A cinema subgenre since the First World War, submarine movies deal in claustrophobic tensions and the primal fear of death by drowning. Over the years just about every major Hollywood male star has taken his turn squinting into a periscope. Today, Reeling Back adds four titles to its U-boat archive (with links to them all following the Afterword to this posting). Charlton Heston is the star presence in command of the USS Neptune, the nuclear vessel in deep distress in director David Greene’s 1978 disaster epic Gray Lady Down.

Thursday, March 16,1978.
GRAY LADY DOWN. Written  by James Whittaker and Howard Sackler. Based on the 1971 novel Event 1000 by David Lavallee. Music by Jerry Fielding. Running time: 111 minutes. Directed by David Greene. Rated General entertainment. AGAIN, DAVID CARRADINE. It's a mystery to me how he does it — but somehow, John Carradine’s eldest son manages to find work.
While dozens of genuinely talented young actors collect unemployment benefits, Carradine, 37, is all over the place. Tuesday, it was in director Ingmar Bergman’s The Serpent's Egg [1977]. Today, Gray Lady Down.
Coming soon are Deathsport 2000 [1978], The Moonbeam Rider [1979] and The Silent Flute [1978].
Obviously the guy's got something. Whatever it is, though, it doesn't show on screen. When the cameras roll, Carradine generates ail the charisma of a freshly filleted flounder.
In Gray Lady Down, filmgoers are offered a totally unconvincing Carradine-as-military-hero. He plays Donald R. Gates, a U.S. Navy captain and designer of a two-man submersible called The Snark.
Gates and his experimental vessel are called upon to assist in an undersea rescue. The Neptune, an atomic submarine, and the "gray lady" of the title, has collided with a freighter off New England.
She has sunk to the hull-crushing depth of 440 metres (1,450 feet). To make matters worse, she is teetering on the edge of an undersea canyon in a region plagued with geological turbulence.
With more than half of his crew lost, Captain Paul Blanchard (Charlton Heston) can do little more than grit his teeth and wait.
Gray Lady Down is another slickly-made item from Universal City 's film factory. With a storyline borrowed whole from the recent Airport 77, it was developed into the sort of low-risk venture so beloved of corporate accountants.
The results were predictable. Although the studio operation guarantees a high level of technical excellence, it insists on play-it-safe scripts and formula situations. At virtually every turn, character interest is sacrificed to gadget interest.
The screenwriters, James Whittaker and Howard Sackler, make no more than a feeble gesture in the direction of character development. Following the collision, Capt. Blanchard is confronted with an insubordinate executive officer,  Cmdr. David Samuelson (Ronny Cox).
On the surface, rescue chief "Ben" Bennett (Stacey Keach) clashes with the iconoclastic Gates. Such efforts, of course, are promptly headed off by the director, David Greene, a British-born alumnus of CBC television.
Although he displayed considerable sensitivity and some inventiveness in his 1973 film version of the musical Godspell, Greene here opts for mechanical efficiency. The tension level falls somewhat short of the deliciously unbearable.
And why not? It is, after all, gadget rather than human failure that sends the "gray lady" down. Gadget specialists are dispatched to the scene. Gadgets, eventually, will save the day.
Greene's characters understand such priorities. "Thank God," breathes a crewman as The Neptune settles on the bottom, her hull managing to withstand the tremendous pressures.
"God, and General Dynamics," says Blanchard, putting the situation in perspective. If he has any faith at all, it is in the power of the military-industrial complex.
With the exception of Carradine, woefully miscast as a self-sacrificing boffin, Greene's players work hard to make a showing against the machines. Indeed, Heston is the screen's most credible sub captain since Clark Gable took on the Imperial Japanese navy in Run Silent, Run Deep (1958).
In the end, though, the battle goes not to the strong of heart but to the steady of circuit. Gray Lady Down is an entertainment to delight the gadget lovers.

Afterword: Back in 1978, I didn’t get David Carradine. Born in 1936, he’d made his screen debut in the 1947 TV version of the oft-filmed A Christmas Carol, the one that starred his father John as Ebenezer Scrooge. He didn’t take up acting as a full-time job until the early 1960s, gaining star status playing the title role in the single-season 1966 western
TV series Shane. Although family ties may have played a part in his career choice, he worked often and he worked hard. Carradine is best remembered as frontier martial artist Kwai Chang, the part he played in the three-season TV series Kung Fu (1972-1975) and its four-season reboot Kung Fu: The Legend Contines (1993-1997). Or, perhaps, as the title character in director Quentin Tarantino’s Kill Bill features (2003; 2004). His success became less mysterious to me after reading over and over again that people liked working with him. Turns out that David Carradine was a really nice guy.
I paid a great deal of attention to Carradine in my review of Gray Lady Down because he was the movie’s co-star. I hardly noticed the young actor making his film debut in the bit part of a Neptune crewman named Phillips. That changed when Christopher Reeve turned up in 1978’s biggest Christmas release, Superman. Playing both Clark Kent and Kal-El, Reeve introduced us to superhero movies. He reprised the role in 1980’s Superman II, in Superman III (1983) and Superman IV: The Quest for Peace (1987).