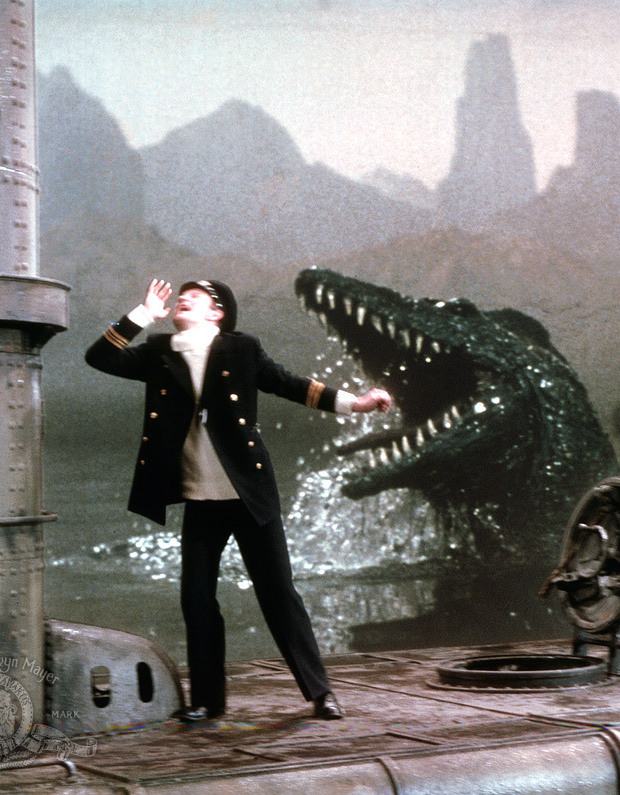 Dinosaurs were not the enemy that U-boat crewman Deitz (Anthony Ainley) expected to face in director Keven Connor’s 1974 action fantasy The Land that Time Forgot.


Today (April 11) is Submarine Day, the annual celebration of undersea naval operations. So is March 17. The earlier date is marked in the United Kingdom, which lays claim to the first such vessel. Built in 1620 by Dutch engineer Cornelis Drebbel for James I, it was successfully tested in the River Thames by the Royal Navy. Not to be outdone, American subaquatic aficionados pay tribute to the April afternoon in 1900 that the the U.S. navy established its modern Submarine Force with the acquisition of the USS Holland (named for its builder, John Philip Holland). First called “the silent service” in 1929, the intense, scary world of submariners has exerted a particular fascination for writers and filmmakers ever since Jules Verne introduced us to Captain Nemo’s Nautilus in his 1820 novel Twenty Thousand Leagues Under the Sea. A cinema subgenre since the First World War, submarine movies deal in claustrophobic tensions and the primal fear of death by drowning. Over the years just about every major Hollywood male star has taken his turn squinting into a periscope. Today, Reeling Back adds four titles to its U-boat archive (with links to them all following the Afterword to this posting). Doug McClure, who was first noticed in the 1957 sub attack thriller The Enemy Below, was back beneath the waves in director Kevin Connor’s 1974 adventure fantasy The Land that Time Forgot.

THE LAND THAT TIME FORGOT. Written by James Cawthorn and Michael Moorcock, Based on the 1918 novel by Edgar Rice Burroughs. Music by Douglas Gamley. Directed by Kevin Connor. Running time: 90 minutes. Rated General entertainment. IT MAY BE THE WORK of a secret society. Then, too, it just may be a form of delightful insanity, a product of coincidental nostalgia for the days of the Saturday matinee.
Whatever the reason, the pulp-adventure tradition is experiencing a minor revival at the hands of filmmakers. Doc Savage, the Man of Bronze made an ambitious (if not particularly successful) movie debut earlier this year [1975].
Next year [1976], there are two major remakes of King Kong on the studio schedules. For the moment,  matinee fans are being offered The Land That Time Forgot, a British-made action film based on the 1918 novel by Tarzan creator Edgar Rice Burroughs.
Its script, credited to James Cawthorn and science-fantasy writer Michael Moorcock, is a low-key adaptation. It is a wise approach, considering the feature’s rather standard special effects.
A period tale, it begins with a First World War German U-boat sinking a British merchantman. As luck would have it, the survivors are on hand when the sub surfaces, and they are able to take over the enemy warship.
Navigation problems ensue, and the whole lot — including rich American submarine expert Bowen Tyler (Doug McClure) and pretty British biologist Lisa Clayton (Susan Penhaligon) — end up in Antarctic waters. As in last year’s Disney offering, The Island at the Top of the World, our heroes find a volcanically warmed island surrounded by icebergs and snow.
Here, evolution (as well as the Great War) is suspended. The sailors unite to contend with both carnivorous dinosaurs and at least three different tribes of sub-humans. (Burroughs seems to have been influenced by Sir Arthur Conan Doyle's The Lost World, published in 1912, about six years before his own book.)
Director Kevin Connor’s film is hardly a definitive work. The fantasy-world visuals, though extensive and ambitious, lack the finesse necessary to be truly overwhelming. Sophisticated matinee movie fans will come away with the feeling that effects supervisor Derek Meddings was given too much to do in too little time.
The character development is tantalizingly incomplete. Although his script manages some bracing conflict between the English and German mariners, the romantic one — Tyler and urbane German Capt. Von Schoenvorts (John McEnery) vying for the affections of Miss Clayton — never convinces.
Connor’s greatest failing, though, is to make clear the secret of this particular lost world. Though the adventurers track the evolutionary riddle to its source, no one bothers to explain the answer they find there.
Instead, it's on to climactic earthquakes, volcanic eruptions and cosmic upheaval.
A competent, even attractive feature, The Land that Time Forgot is an adventure yarn that aims its big screen thrills at the kiddie crowd. Though worth a holiday outing for parents with subteens, it’s not likely to become a perennial.

Afterword: Kids in the 1950s loved submarines, and it was probably Walt’s fault. In 1954, the Disney studios offered them the first science-fiction feature film shot in CinemaScope, an adaptation of Jules Verne’s 1870 novel 20,000 Leagues Under the Sea. It was heavily promoted during the first season of the Disneyland television show, and was released to theatres for Christmas. The screen’s ur-steampunk fantasy, it told the tale of the mysterious Captain Nemo (played by James Mason) and his electrically-powered undersea vessel, the Nautilus. That same year, the U.S. Navy generated headlines with the launch of its first nuclear-powered submarine, which was christened the USS Nautilus. Disney’s picture went on to become the third top-grossing film of 1955.
Further romanticizing the life subaquatic was Silent Service, a two-season NBC-TV series (1957-1958). Its half-hour episodes told the stories of various vessels in the American Submarine Force, and provided early work for DeForest Kelly and Leonard Nimoy, actors who would later serve together aboard Star Trek’s starship Enterprise. Producer-director Irwin Allen kept the pulp pot simmering with his 1961 sci-fi feature Voyage to the Bottom of the Sea. Despite the best efforts of a saboteur, the USOS Seaview survives to save the world, and also to inspire a four-season ABC-TV series (1964-1968).