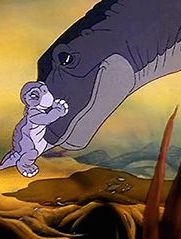 Baby brontosaurus Littlefoot (voiced by Gabriel Damon) is comforted by his mother (Helen Shaver) in director Don Bluth’s animated feature The Land Before Time (1988).
Features the voices of:


Family values as old as the dinosaurs


So far in her career, the multi-talented Helen Shaver has been successful as a big screen actress and TV director. Born on this day (February 24) in 1951, she includes among her film credits a voice performance in director Don Bluth’s 1988 cartoon feature The Land Before Time.

Friday, November 18, 1988.
THE LAND BEFORE TIME. Written by Stu Krieger. Based on a story by Judy Freudberg and Tony Geiss. Music by James Horner. Directed by Don Bluth. Running time: 69 minutes. General entertainment with the B.C. Classifier’s warning: may frighten some children. CUTE, CUDDLY DINOSAUR BABIES. What a sticky-sweet cartoon concept!
George, Steve and Don. What a great bunch of guys!
Each of them is a film artist, an imaginative, quality-conscious craftsman. Among the things that they share is their love for traditional “full” animation.
Together, they’re the team responsible for The Land Before Time. An attractive-looking new cartoon feature, it’s “presented” by George Lucas and Steven Spielberg and directed by Don Bluth.
George (Star Wars) Lucas and Steven (E.T.) Spielberg are modern cinema’s acknowledged hitmakers. Their own live-action fantasies have delighted millions.
Don Bluth is the most exacting feature-film animator operating independently of the Disney organization. Working in the painstaking “classic” (read “Disney”) cartoon style, he introduced himself to filmgoers in 1982 with The Secret of NIMH.
Steve was impressed with Don’s effort. So much so, he joined with him to present the director’s second cartoon feature, An American Tail (1986).
And now George adds his name to Don’s third major release, the 69-minute-long The Land Before Time. Designed to appeal to every kid who ever loved dinosaurs, it is the story of five loveable little lizards and their search for The Great Valley.
Well, calling it a “story” may be a bit too generous. Confected by Don’s American Tail collaborators Stu Krieger, Judy Freudberg and Tony Geiss, it’s really little more than the Rite of Spring sequence from 1940’s Fantasia fitted out with a happy ending.
Baby brontosaurus Littlefoot (voiced by Gabriel Damon) is hatched into troubled times. The planet’s weather patterns are changing, and the plant-eating dinosaur herds are constantly on the move, seeking out new foraging grounds in an increasingly arid land.
A mountain-shattering earthquake changes his world forever. Menaced by a hungry tyrannosaurus (Frank Welker), he is saved by his selfless mother (Helen Shaver). The orphaned Littlefoot then sets out in search of the legendary “Great Valley,” accompanied by four young plant-eaters in similar straits.
His companions include Cera (Candice Houston), a triceratops, Ducky (Judith Barsi), an antasaurus, Petrie (Will Ryan), a pterodactyl, and Spike, a non-talking stegosaurus.
Can you say all those big words, kids?
Of course you can’t.
Don’t even try.
Instead, let Uncle Pat Hingle, the picture’s narrator, tell you the story of how the orphaned longneck called Littlefoot escapes from a sharptooth and, together with a little three-horns, bigmouth, flyer and spiketail, survives the big earthshaking.
Watch as George, Steven and Don dare to be cute and, in the process, reinforce all their worst individual tendencies.
See George’s inclination towards the murkily mythic connect with Steve’s obsession with precocious kids off on their own adventure. See it all reflected in former Mormon missionary Don’s preachy-teachy production, a film light on plot but thick with sermonettes on “the great circle of life” and obvious moralizing about the the “easy way” and the “wrong way.”
Clearly some positive values are preferable to the empty, mechanical merchandizing of He-Man and She-Ra (seen flogging their brands in 1985’s The Secret of the Sword). Still, over-the-top efforts like The Land Before Time do make one appreciate the genuine entertainment to be found in those golden-age Disney features.
Because of its brief running time, Bluth’s ultra-wholesome feature is billed with Bill Bird’s 21-minute cartoon short The Family Dog, a recycled episode from Spielberg’s 1987 TV series Amazing Stories.

Afterword: Although The Land Before Time was a major box office success for Universal Pictures, George, Steve and Don each took his share of the earnings and ran along to other projects. Distributor Universal, recognizing the concept’s future money-making potential, turned the tale into a franchise. Between 1994 and 2016, it released 13 direct-to-video Land Before Time features and a single-season TV series (2007-2008) that was seen in the U.S. on the Cartoon Network.
As Littlefoot’s mother, Helen Shaver had a pivotal role in The Land Before Time. Not only does she shape her dino son’s character, but she saves his life at the cost of her own in a fight with the movie’s T. Rex villain. First seen on screen in a 1974 episode of the CBC-TV series The Beachcombers, actress Shaver has contributed to the growth of Canada’s cultural industries for more than four decades. She made her movie debut in Vancouver director Peter Bryant’s independent feature, The Supreme Kid (filmed in 1974, but not released until 1976). Two years later, she won her first best-actress Canadian Film Award for her role in George Kaczender’s In Praise of Older Women, a censor-baiting drama that many consider a milestone in English-Canadian cinema.
Shaver’s award-winning performance in director Donna Deitch’s landmark feature Desert Hearts challenged boundaries of another sort. Based on a novel by Canadian author Jane Rule, the 1985 film told its story of lesbian love so well that it is today regarded as an independent movie classic. Shaver moved behind the camera in 1997 to direct an episode of the TV series Dead Man’s Gun, a western shot on location in B.C. A year later, she made her feature debut, directing the made-for-TV movie Summer’s End. Ever since, she has balanced acting with directing assignments. When she established her own company, she called it MAWD Productions. The acronym stands for “Mother Actress Woman Director,” all roles that she plays well. Helen Shaver celebrates her 66th birthday today (February 24).

See also: Other films in the Reeling Back archive that feature appearances by Helen Shaver are: Starship Invasions (1977); and Bethune: The Making of a Hero (1990).