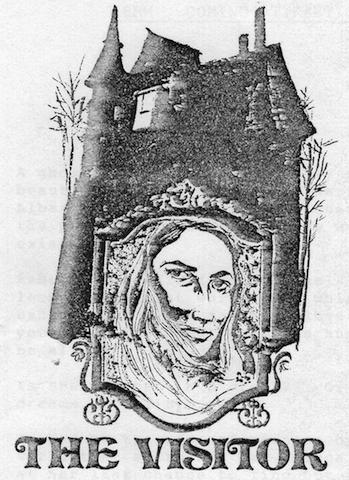 The theme of gothic romance is emphasized on the cover of the premiere release press kit for director John Wright’s 1974 feature The Visitor.


OK, today (July 1) is Canada Day. In 1974, when the national holiday was still known as Dominion Day, the celebrations were held during the last week of a federal election. On July 8, Pierre Trudeau’s governing Liberal party went from a minority to a majority in Canada’s House of Commons. To the best on my recollection, film policy was not an issue in the campaign. Support for the struggling domestic industry was neither mentioned in finance minister John Turner’s pre-election budget speech on May 7, nor his post-election speech on November 18. On that day, though, the government increased its Capital Cost Allowance for films from 60 to 100 per cent. Under the new rules investors could deduct from their taxable income 100 per cent of the dollars they put into domestic productions. A Canadian Audio-Visual Certification Office (CAVCO) was created to administer the CCA, and the result was the “tax shelter era” of Canadian filmmaking. Eight years of excitement, controversy and disappointment followed. In the positive spirit of the day, though, we’ll stay with 1974, and recall four of the Canadian features that opened in Vancouver during a year in which the most popular baby names in the U.S. were Michael and Jennifer. Today’s additions to the Reeling Back archive (with links to each following the Afterword to this posting) include writer-director John Wright’s atmospheric fantasy romance The Visitor.

THE VISITOR. Music by Luigi Zaninelli. Written, co-produced and directed by John Wright. Running time: 96 minutes. Mature entertainment. THERE IS A STILLNESS that comes over the landscape in winterlands, a quiet that can chill the blood and inflame the imagination. Russian authors have felt it, and so have Swedish filmmakers.
Both groups have responded to their situations with brooding, often fevered visions of the inner self, works of art that manage to speak to all humanity.
John Wright is neither a Russian nor a Swede. Indeed, such heavy comparisons at this stage in his career are really a bit unfair. His film, while good, is not that good, and it would be unrealistic for filmgoers to set their hopes impossibly high.
A British Columbia-born Canadian, Wright does share with those other northern artists a sense of distance from reality, and an ability to express his ideas with astonishing power and clarity.
He's managed to focus on one such idea in The Visitor, a shoe-string budget feature film that he directed last year [1973] in and around Calgary's Heritage Park historical site. His achievement is all the more impressive when you realize that Wright, a 36-year-old drama professor, has never made a movie before.
The Visitor is the kind of film that evokes a mood and suggests a state of mind. A simple idea, it held me, not by intense action or intricate plotting, but by the emphatic bond it quickly builds between the filmmaker and his audience.
It is the story of Rebecca Sinclair (Pia Shandel), a history student who attempts to relive a portion of the past she loves. To do so, she arranges to spend three solitary weeks in the Tyler House, centrepiece of snowbound Heritage Park, a preserved townsite that has been closed for the winter.
When she awakens after her first night in the Edwardian mansion, she discovers that she is not alone. In the kitchen, she meets a high-collared young man (Eric Peterson) who identifies himself as Michael Tyler, son of the home's owner.
"This is some kind of joke, right?" she asks with a touch of anger.
"No," he answers, bewildered at the appearance of a strange girl. "Not unless it's your joke."
One of four things has happened. Rebecca is either the victim of an elaborate hoax, has slipped through time into the past, is sharing her lodgings with a ghost, or has slipped her trolley.
Wright offers filmgoers few clues, preferring to blur rather than define the line between reality and illusion. He is helped in the task by an able crew that includes art directors Marti Wright (his sister) and Mary Gazetas (daughter of Vancouver broadcaster Dave Brock); by composer Luigi Zaninelli who provides him with a richly evocative score, and by Vancouver cinematographer Doug McKay, whose camera skills belie the film's $97,000 total cost.
In  front  of  the  camera, Vancouver's Pia Shandel and Eric Peterson (who comes from Indian Head, Sask.) are a pair of effective, otherworldly lovers.
If a ghost, Peterson’s Tyler manages to hide his menace beneath a convincing aura of self-effacement that hints of an anxiety-free Woody Allen. Shandel's natural Nordic beauty and tightly controlled performance underlines the mood of frozen turbulence in their relationship.
For a brief time it works. “Becca," he says to her at one point, ''we've both been living in one world and wanting another."
Perhaps. But Rebecca finds herself unable to cope with the ambiguity, indeed, the impossibility of her situation. She becomes desperate to resolve it.
In the end, unfortunately, director Wright lets her down. Happily, he resisted the temptation to write a pat ending (such as having her wake up to discover it was all a dream). Unhappily, he is not able to resolve her dilemma without shock tactics, a bit of climactic bloodletting that shatters the elegiac tone.
On the balance, it is a minor flaw in a film that manages to accomplish much. The Visitor marks John Wright as a powerful new talent, and a filmmaker to watch in the future.


The above is a restored version of a Province review by Michael Walsh originally published in 1974. For additional information on this archived material, please visit my FAQ.

Afterword: A filmmaker to watch . . . or not. My positive assessment of John Wright notwithstanding, The Visitor remains his only theatrical feature. In a March 1974 interview, he told me that he’d been signed to direct two episodes of CBC-TV’s hit series The Beachcombers. At that moment, he said, his commitment was to filmmaking.
Creative careers take many turns. Originally a history student, he’d dropped out of school to work professionally in live theatre. He later returned to the University of British Columbia to complete his B.A., then went on to Stanford for an MFA. In 1967, Vancouver’s Playhouse Theatre Company hired him as assistant artistic director, where he developed its Stage II program for the development of new Canadian plays. He returned to academe in the late 1960s to take up duties a a drama professor at the University of Calgary, where he developed the idea for The Visitor.
Returning to Vancouver, he became an active part of the B.C. artistic community, directing television drama and documentary films, as well as live theatre. In the mid-1980s, he returned to UBC to chair the graduate program in film production, becoming head of the Theatre and Film Department in the mid-1990s. In addition to a generation-long involvement with the Vancouver Cantata Singers, Wright was co-founder in 2004 of Blackbird Theatre, a professional company dedicated to performing the classics. No surprise, then, that in 2010 the B.C. Entertainment Hall of Fame added his name to its list of Pioneers.

Also Canada aussi: Among the other Canadian films released in 1974 currently posted to the Reeling Back archive are director Claude Fournier’s Alien Thunder,